This page contains characters related to a major Plot Twist in Chapter 101. To preserve the twist, any tropes regarding them following this chapter should be added here. You Have Been Warned!

The main characters of EDENS ZERO. Click here to return to the main page.
open/close all folders

"I don't follow your rules. My friend is more important. And I'm not some hero fighting for justice... If you hurt my friends...I'll show you the kind of Demon King I can be!!"

The adoptive grandson of Demon King Ziggy, and the sole human inhabitant of Planet Granbell, where he was raised in an abandoned theme park run by robots. He gets swept up on a space-faring adventure with Rebecca and Happy to explore new worlds across the cosmos and make as many friends as he can along the way, but a lifetime without human contact has left his social skills somewhat lacking. To overcome this, he has made it his life's goal to find the legendary goddess Mother, using the Edens Zero—his birthright from his late grandfather—to do it.

The Ether Gear Shiki inherited from Ziggy, Satan Gravity, lets him alter gravity for himself or any person or object he chooses. This affords him a wide range of skills such as making things lighter or heavier, running across walls, sliding down floors, "falling" up and sideways through the air, hurling compressed gravity bullets, and crashing into his enemies like a comet.
Ziggy

An amateur B-Cuber from Planet Blue Garden who strives to hit one million subscribers for her video account, Aoneko Channel,* "Blue Cat" Channel by traveling to different worlds and recording whatever interesting thing she can find. As the first human friend Shiki makes, she ends up saving his life when all his robot friends suddenly turn on him, taking him with her to explore the cosmos. When Shiki decides to search for Mother, Rebecca eagerly goes along with his suggestion to record never-before-seen evidence of her existence, thinking it's her perfect ticket to online fame.

Rebecca is oftentimes just your average, cheery teenage girl, but turns into a vicious gunslinger when armed with her twin Happy Blasters, the weapon form of her trusty cat bot friend, Happy. While already a skilled fighter in her own right, she eventually learns her own form of Ether Gear called Cat Leaper, which enhances her jumping ability and speed, among a few other tricks she has only begun to grasp...
Happy 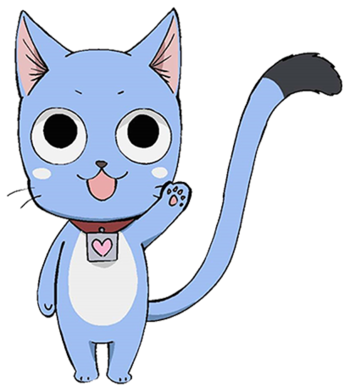 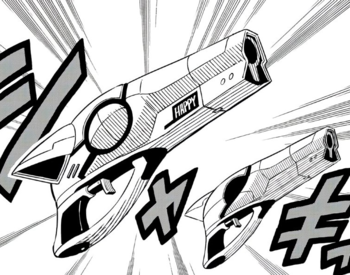 Rebecca's lifelong friend and companion, who also happens to be a talking blue cat bot. Once a regular alien feline from the planet Excede, he was rebuilt as an android after a nearly fatal traffic accident horribly maimed his body. He has long since adjusted to his robotic form, which can be converted into a pair of "Happy Blasters" that Rebecca uses to fire compressed Ether bullets upon her enemies.

Not to be confused with the Fairy Tail version of Happy.
Weisz Steiner (Young) / Arsenal

An alternate version of Professor Weisz's past self who came into the present after a Chronophage ate fifty years of time from his home planet, Norma. Far from the respected scientist his future self would become, Young Weisz is a degenerate thief who prefers to steal, cheat, and smooth-talk his way through life. He doesn't get along especially well with the crew, but tags along with them anyway so he can fully indulge in what the future has to offer.

Weisz's Ether Gear, Machina Maker, lets him instantly build and remodel whatever machine he touches to his liking.
For info on Weisz's present-day self, see here. 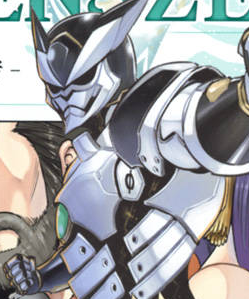 "You will be the first chapter in the Arsenal legend!!! And the legend of me... starts right here!"

Weisz's "superhero" identity, which he takes up whenever he wears his Arsenal Suit, an armored exoskeleton he constructed with Hermit's help. This suit runs on his body's Ether and draws out the true potential of his Machina Maker, which he uses to modify the suit with any weapon and gadget he needs. 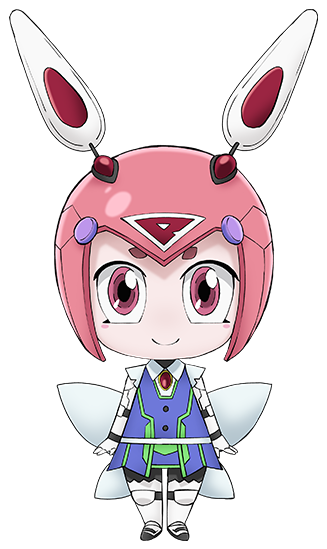 A tiny "anti-bot" android who specializes in using EMP to disable technology and Ether Gear. She was built by Ziggy some time between his retirement and death to serve as the so-called Light of Edens, but lost all memory of her past after it was cruelly erased by a gang of thugs. After being rescued by Shiki, Pino pledges him as her new master, joining him to discover the true meaning of her existence—and finding a new sense of purpose by being reborn as a human through Mother.

"My name is Homura Kōgetsu. And my blade is the holy power granted me by my master. 'Tis the sword meant to defeat the Demon King."

A young samurai in training from Planet Oedo who has the unfortunate habit of blurting out every thought that crosses her mind. She was mentored by the Four Shining Stars' Valkyrie, whose five-year disappearance leads Homura to join the Edens Zero crew in the hope of finding her. She also sees this as an opportunity to test her own mettle by challenging the current Demon King, Shiki, to an honorable duel.

Homura's Ether Gear, Soul Blade, is a technique taught to her by Valkyrie that produces swords of solid Ether with which to fight.

In General
The Demon King's Four Shining Stars are a quartet of androids created by Ziggy to serve aboard the Edens Zero. Each member is connected to one of the ship's core functions, bringing out its full capabilities when all four are together.
Witch Regret 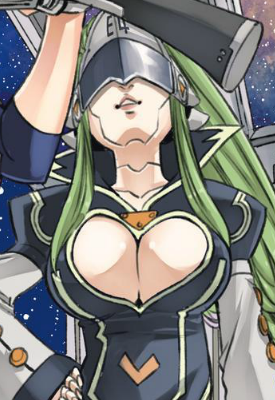 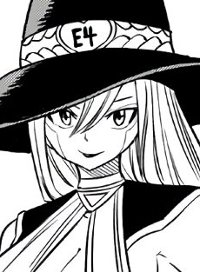 "I am the Shield of Edens. I will eliminate whatever enemy I must to protect my family. That is the reason I fight."

The Shield of Edens, a sorceress who serves as the Edens Zero's caretaker and first line of defense. She is completely subservient to her master, the Demon King, and loves the crew as if they were her family, but is terrifyingly ruthless to anyone unwelcome aboard her ship. Witch is the only Shining Star to remain aboard the ship after Ziggy's retirement, dutifully waiting for Shiki's return and succession as Demon King.

Witch typically uses Shield Ether to create force fields to defend against threats to herself and the ship. However, her true specialty lies in changing her Ether's elemental properties and manipulating it as if it were magic.
Sister Ivry 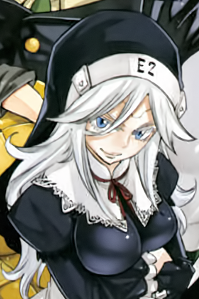 "Don't worry. No matter how much it hurts, I won't kill you. I'm the Life of Edens. I can bring you back to life as many times as I want."

Sister's Heal Atomizer gives her the miraculous ability to mend wounds, repair broken machines, restore lost stamina, and undo negative status effects, and even "overheal" people—the last of which is just as dangerous as any injury.
Hermit Mio 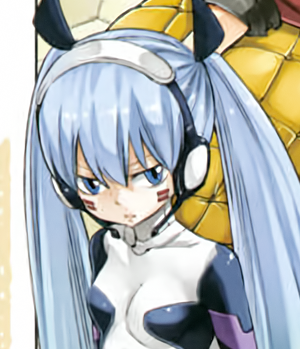 "I can be kind because I do know pain. That is the way of my heart."

The Mind of Edens, an ace programmer and gamer who manages the ship's security systems. She is found in the virtual world of Digitalis following a traumatic incident on Planet Newton that left her with a seething hatred of humans, but Shiki's kindness inspires her to come out of isolation and learn to trust her new human crew.

Hermit's special hacking ability, Master Code, allows her to break into computer systems and reprogram them however she pleases, which makes her especially powerful in an age where just about every device is linked up to a network.
Valkyrie Yuna (Unmarked Spoilers) 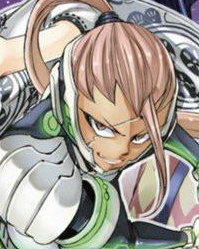 "If you have something to say, then say it. Words will give you strength."

The Sword of Edens, a warrior maiden responsible for all of the ship's armaments. Valkyrie served as Homura's childhood mentor and unofficial guardian on Oedo, teaching her how to use her Soul Blade ability, but went missing for five years while searching for Homura's biological mother, Kurenai, amidst social stigma towards her human-machine relationship with her pupil. She is eventually found long dead due to Kurenai's treachery on the planet Sun Jewel, where Valkyrie's sacrifice has inspired a revolution against Kurenai, forcing Homura to take up the torch. 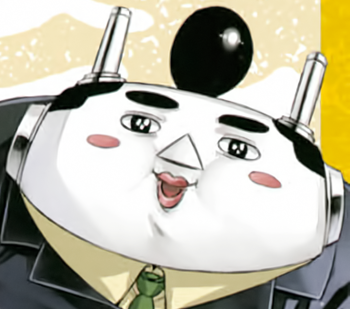 Sister's overweight android minion who performs various odd jobs around the ship. He was once reprogrammed as a member of the mercenary squad Rogue Out before Sister restored him to his original programming. He has a mysterious button on his belly, but since pushing it is strictly off limits, one can only imagine what it does... 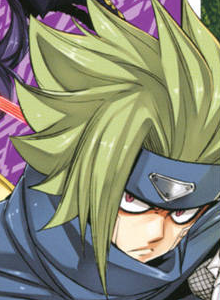 "I am a mercenary. I can't betray my employer. However, I swore I would always protect Kleene. Even if it costs me my life."

An O-Tech mercenary who first clashes with the Edens Zero crew as a member of the Rogue Out squad, and later as a freelancer hired by Drakken Joe. Ruthless and anti-social, he cares for no one but his little sister, Kleene, and will stop at nothing to cure her of her rare affliction. To this end, he is exploited by both his employers until he finally gains Sister's promise to treat Kleene, resulting in a tentative alliance as he accompanies the crew to make sure they get the job done.

Jinn uses Ether Gear to create powerful winds that can cut through solid objects. Combined with his mechanized body and his attempts to practice Overdrive, he can further enhance his wind's strength until it has the force of a typhoon.
Kleene Rutherford 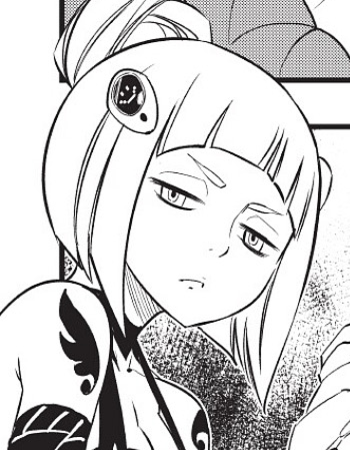 Jinn's younger sister, also known as Sylph, Element of Wind in Drakken Joe's Element 4. Although she appears to lack emotion on the surface, her feelings are actually suppressed by the devices on her head due to a unique affliction that causes her to suffer from severe mental breakdowns at even the slightest expression. After her condition is made known to the crew, she is brought on board the Edens Zero as a patient.

Similar to her brother, Kleene uses a wind-type Ether Gear, Wind Flow, to create air currents that absorb any object or person, even in the vacuum of space. 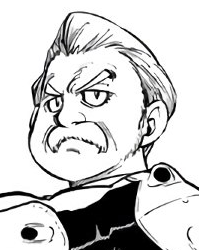 "This ship has magnificent abilities. Give it a magnificent captain, and naturally, he'll make her perform even better."

The Edens One's mysterious captain hailing from the Aoi Cosmos, whose piloting skills are second to none. The Edens Zero crew finds him after a shipwreck leaves him drifting through space. 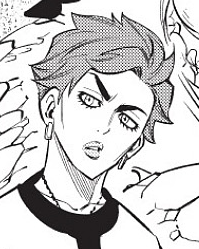 "Anyone who cries in front of me, will never stand back up again."

An effeminately dressed stage actor who wound up in the Sakura Cosmos's seedy underbelly as the Spirit of Water in Drakken Joe's Element 4 after a twist of fate. While blunt and seemingly unfazed by Drakken's evil, he proves himself to be one of the more humane members of Drakken's team, which convinces the crew to let him hitch a ride with them until he can find a new planet where he can lay low.

Laguna's Ether Gear, Tears Lover, allows him to not only control water, but also turn other people into water whenever they cry. Thus, he prefers to use dirty tactics to milk his enemies' tears for an easy win, only treating direct combat as a last resort.