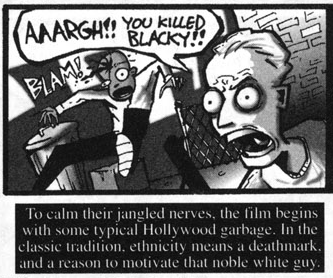 Over time and due to social push, access to higher-paying jobs and relative economical stability began to open up for black people, with more and more prominent black characters in films and other media, with more big-name black actors emerging to show off their talents. Studios had also finally accepted that white audiences are generally not as racist as was once assumed, and certainly do not need to have a white protagonist all the time in their favourite media.

In The New '10s this is beginning to approach Discredited Trope territory, as Black Lives Matter is becoming a prominent sociopolitical movement and increasingly Genre Savvy audiences have developed a tendency to groan when the Token Minority is first on the chopping block. Horror movies especially are much more likely to lampshade or parody the trope than play it straight these days. However action films or video games still somewhat tend to struggle to move away from the trope, having the black character go down second or third.