Marcus is a 14-year-old student who loves to fight and, in a way, considers himself to be an "ultimate fighter" . He lives with his mother Sarah and younger sister Kristy. Marcus meets and fights Agumon in the first episode of the series. When the fight ends in a draw, Agumon agrees to become his partner. Soon afterward, he's recruited as a member of DATS. Marcus is one of the few shown to fight Digimon by himself, though he still counts on Agumon's help to fight the stronger opponents. Even though others can evoke their DNA charges by themselves, Marcus must connect a punch on an enemy to do so, subsequently using it to digivolve Agumon.

After the final battle he decides to stay in the digital world to help keep Digimon in-line.

Thomas is a 14-year-old boy genius who graduated from the Stockholm Royal University of Science at the age of 13. His abilities are considered élite, even within DATS. He bases his operations on data and theoretical principles, and as such his personality clashes with Marcus'. His mother is Japanese and his father is a prominent Austrian aristocrat named Franz Norstein. Franz and Thomas's mother met while she was an exchange student in Austria, and Thomas lived with his mother in Japan until she died. He was taken back to Austria. He also has a younger sister, Relena, who suffers from a strange disease. It is never shown who Relena's mother is, but she died of complications during childbirth. While Thomas does not particularly care for his cold father, he does love his sister very much and does whatever he can to protect her. Calm and shrewd, he is the exact opposite of Marcus and sees him as a rival. He has an elitist attitude but he gets emotional when thinking of his mother, who died years ago when he was young.

"This is the worst!"

At eighteen years of age, she is the oldest member of the group, compared to Marcus Damon who is fourteen years old and Thomas H. Norstein who is roughly the same age. Yoshino is independent and sees herself as an older sister figure to her two teammates. Despite her mature demeanor, she hides a terrible burden from her childhood and because of it, she has difficulty believing in her ability to do anything. When she was younger, Yoshino dealt with a severe inferiority complex that stemmed from being unable to be as good as her sisters at anything (the most noteworthy incident was a piano recital). As a result, years later, she still is secretly worried about being useless to anyone. Lalamon had been aware of her suffering for some time and helped her to overcome it. The fact became apparent when she started to feel she was useless to Marcus and Thomas since her Digimon was easily beaten in every single battle they took part in, but she eventually gained her own confidence, which allowed Lalamon to warp digivolve to Lilamon.

As opposed to the other members of DATS, Keenan did not live in the human world, nor did he originally have a particular liking for it. Though originally born on Earth to the DATS scientists Kevin and Michelle Krier (Kenji and Misuzu Noguchi), he was accidentally transported to the Digital World as an infant. In the Digital World, he was raised by a Frigimon, who acted a a mother figure to him. Falcomon was raised alongside him like a brother. Following her death, he was raised by Merukimon, who became a father figure to him. He believes in defending the peace of the Digital World, and also believed that humans were nothing but a threat to it. Despite his young age, Keenan has great fighting skill (many of his moves mirror the ninja-like aspects of Falcomon). He wields a boomerang, and wears a cape and a necklace adorned with feathers, and also has facepaint. 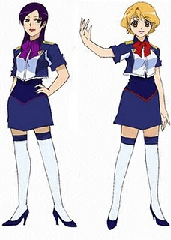 The computer operators at DATS, who generally give data on the digimon the team is facing. After the final battle, they become police officers.

The Commander of DATS Japan, giving the three main members their orders. He also worked with Yushima as a private investigator, which led to them joining the expedition to the digital world and meeting Spencer Damon. 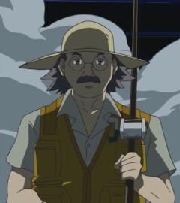 A mysterious old man who gave Marcus his Digivice and some advice several times throughout the series. Eventually revealed to be the chief officer of DATS and the partner of Kamemon, as well as a member of the first expedition to the Digital World. He is, to date, the oldest human in a Digimon series to own a Digivice of some kind and have a Digimon partner.
Voiced by: Cho (JP), Kirk Thornton (EN), Rafael Calvo (Spain), Mario Hernández (Latin America)
Spencer Damon (Daimon Suguru)

The legacy of Dr. Spencer Damon is felt throughout the series, even though he does not appear in it personally at first. He is Marcus's father, and a member of the expedition to the Digital World. When the group was forced to escape back to the human world, he stayed behind to make sure they could escape, and for a while, it was unknown what happened to him. That is, until the answers were revealed by the Digimon called Mercurimon. Spencer had remained back in the Digital World in order to seek out the "god" of the Digital World named King Drasil. Before that, however, he created the Digivice, and sent the data for it to the human world along with Kudamon and Kamemon. After making a deal with Mercurimon to preserve the peace of both worlds, he departed.

Over time, he was joined in his search by BanchoLeomon until they found King Drasil, but things went wrong and by the time Marcus and gang confronted King Drasil, it used Spencer's soulless body as its own. The soul of Spencer himself was taken in by BanchouLeomon at the last second when the Royal Knights advanced on them. However, thanks to his friend's sacrifice, Spencer was restored and King Drasil was purged from his body. Spencer returns to his family at the end of the last episode.

A rather incompetent representative of the Confidentiality Ministry who oversees DATS.

Yuma Kagura
A character exclusive to the PS2 game Digimon World: Data Squad (Digimon Savers: Another Mission). She's Tsukasa's younger sister. She doesn't have any friends because she's friends with Digimon and they call her "monster girl". Yuma was one of the children kidnapped to power up the Demon Lords. Later on, she joins the team with her partner Renamon.
Tsukasa Kagura
A character exclusive to the PS2 game. He's a researcher working for DATS and the best specialist in the Dark Area. Tsukasa is Yuma's older brother. He also graduated at the same university as Tohma. 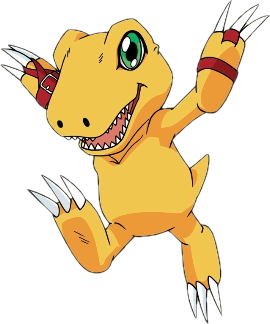 Agumon adores his partner Marcus, and considers himself to be "Marcus's employee". He even refers to Marcus as his Boss (though in the original Japanese he is referred to as aniki which is slang for bro... and what members of the Yakuza use to refer to their boss.) In the first episode, he is referred to by the code-name of Raptor-1 by DATS.

Incredibly loyal to Thomas, Gaomon is the strong and quiet type, though he talks more in later episodes. He tends to blush when complimented. He almost always addresses Thomas as "Sir". He tends to be sarcastic towards Agumon.

Yoshi's partner who has been with her for years. Though kind-natured, she isn't above teasing her companion.

Keenan's partner who was raised alongside him by Frigimon. After Frigimon's death, he follows Keenan to serve Merukimon.

Two PawnChessmons who serve as Miki and Megumi's partners. Like them, they also serve as the computer operators in DATS.

Their digivolutions are as follows:

Sampson's partner who is often seen hanging around his neck. Despite his small stature, he is stronger than he might seem.

A turtle Digimon often seen serving drinks for the operators in DATS. It was later revealed that he is Yushima's partner.

A wandering Digimon who saved Marcus' group when they were chased off by herds of Gizumon XT. He seems to be knowledgeable about the nature of Digisoul and the Digivices.

Sarah is Marcus and Kristy's mother, as well as Spencer Damon's wife. While she first appeared, she reacted somewhat casually to Agumon's presence, it was eventually revealed that she had been knowledgeable of the existence of Digimon for some time. Though kind and supportive of her son, she is somewhat fearful when he voiced that he had to go to the Digital World and stop the machinations of Kurata. Her memories of the family's time with Agumon were temporarily erased, but that seems to have been reversed. She later appears to give the former DATS team dinner, and is very dumbfounded when meeting BanchoLeomon for the first time.

Kristy is Marcus's sister. She was immediately taken with and friendly towards Marcus's rival and friend Thomas, and it was her wish that he escort her and her mother on her birthday. Later, Kristy befriended a newly hatched Digimon who eventually became Biyomon, but this relationship ended when Biyomon was struck down, and later driven to madness after being revived. When her friend was finally defeated, Kristy was happy to know her friend no longer had to suffer. He comes later back as her partner.

Thomas' sickly half-sister who is brought to Japan to undergo an emergency medication.

One of the Olympus XII and ruler of the Infinite Ice Ridge. He has acted as a father figure for Keenan.

A messenger of Merukimon who harbors a deep hatred towards Keenan.

Rhythm
A character featured in Ultimate Power! Burst Mode Activate who is a Digimon in a Human form. 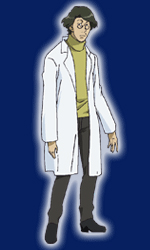 A sadistic yet cowardly scientist who used to work with Satsuma, Yushima, Suguru, and Ikuto's parents, and accompanied them on the first expedition into the Digital World. His experiences and activities there were less than positive. Several years later, he's somehow curried the favour of the politicians in charge of DATS and uses this influence to first accompany the team into the Digital World; then, when that doesn't go quite as planned, to convince the government that both Digimon and DATS are a threat and to have them wiped out and arrested respectively. Things continue to go pear-shaped from there. As the series goes on, he's shown to have no regard for human life either, and in fact his real plan with the data he took from the Digital World was to revive a powerful digimon called Belphemon and use him to Take Over the World.

Originally one of a group of seven powerful Digimon that once terrorized the Digital World, Belphemon was a rather cute-looking Digimon (at least initially) which was weaponized by Kurata, who eventually merged with him after his other means of controlling Belphemon were sabotaged. Belphemon briefly regains control of his body during Kurata's climactic fight with the Data Squad before Kurata took control back.

"Before the two worlds slash into each other, we must totally eliminate the Human World, first."
—King Drasil, through Spencer Daimon

The god of the Digital World. He's not impressed with how humans have been wrecking his world lately.