A hotblooded seventh grader who's quite a good Samaritan. Mikey is one who never overlooks people in need and has a warm personality. He can charm both humans and Digimon alike. He usually accepts lots of requests and is usually a busy helper in his club activities.

Mikey's childhood friend and one year younger than him. She worries about Mikey because he is always doing the unreasonable and is the reliable peacemaker of the group. Bonds with Cutemon, and by extension, is associated with Dorulumon.

Mikey's classmate and kendo boy who proclaims to be Mikey's "eternal rival". Though argumentative, he is good natured and hates things that are immoral/unjust. He tries to take care of Mikey and the Digimon, and serves as Ballistamon's mechanic. 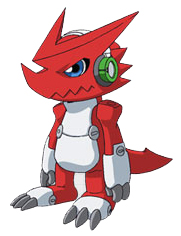 Mikey's main partner Digimon, who has a soul of rock. He protects a village in the Green Zone from evil and is a leader admired by the villagers. This hot-blooded Digimon was charmed by Mikey. In addition to being the basis of a large number of Xrossed forms, he is one of the few Digimon capable of instant natural evolution. 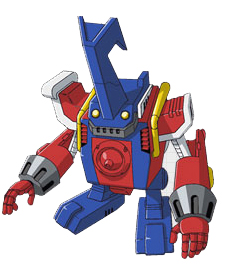 Shoutmon's longtime partner in battle. He's an honest, warrior-like Digimon with a taciturn nature. He becomes a shield for his allies with his awesome power and armor. He combines with Shoutmon to become Shoutmon X2, and from there provides the basis of all of Shoutmon's Xrossed forms. He was a former pirate who drifted to the Village of Smiles, to which Shoutmon fought and then befriended by fixing him up. 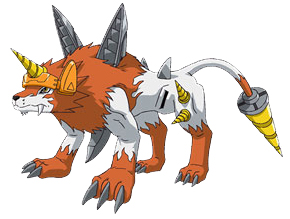 A loner who ends up becoming part of Xros Heart. His battle ability is high, but he hates being commanded or bound by rules. He's a cool vagabond. He combines with Shoutmon and Ballistamon to form Shoutmon X3, and from there forms the basis of the rest of Shoutmon's Xrossed forms.

Dorulu Cannon, with Shoutmon. A two-barreled cannon.
Dorulu Copter, with Starmon and the Pickmons, who attach to his tail to become a propeller. Taiki used this one to save himself and the others from a very long drop.
JagerDorulumon, his natural evolution. A bipedal, armored version of Dorulumon wielding a drill-topped staff. (Manga only) 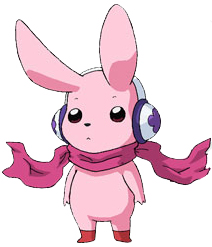 A friend of Dorulumon, who hates the sight of tears.

ShouCutemon, with Shoutmon. A Joke Character that Taiki created in an attempt to make Karatenmon laugh. It's the only one where Shoutmon isn't the "central" Digimon.
GreatestCutemon, with ChibiKamemon, Dondokomon, Bastemon and Knightmon & the PawnChessmons. A goofy-looking Mix-and-Match Critter with a drum for a stomach. 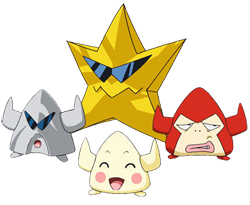 Shoutmon's "otoutobun" (Shoutmon treats him like a younger brother) who greatly admires Shoutmon, and fights by flying through the air. He is in command of a number of Pickmons, which are part of his Meteor Squall attack.

There are three varieties of Pickmon. The most common are the silver ones, who appear armored and wear shades similar to Starmon's. Then there's the yellow, more friendly looking Pickmon (who can spit out small clones called Chibickmon), and finally, the red Pickmon, who seems to be unique and has attached himself to Zenjirou. 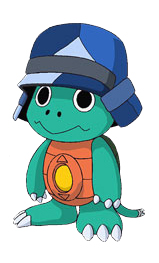 A wide-eyed young Digimon who looks up to Shoutmon. Xros Heart met him in the Island Zone area, and after helping them defeat the Bagra army and to secure the island's Code Crown, he ended up joining Xros Heart. Like Shoutmon, he wants to fight to protect the people important to him, and has bravery beyond his small size.

The elder of the Village of Smiles, who ends up traveling with Xros Heart when they begin searching for the Code Crown. He's useful for dispensing information, but sometimes, he doesn't know quite as much as he lets on. 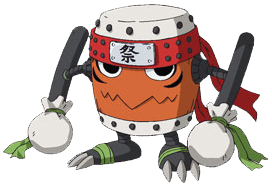 Basically, a living taiko drum. Dondokomon is one of the residents of the Village of Smiles who ends up traveling with Taiki and Xros Heart. He loves festivals, and never misses an opportunity to celebrate...even if it's in the middle of a battle. 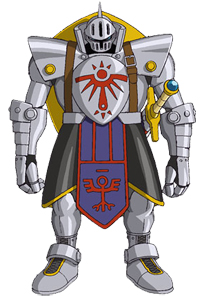 Knightmon Wise Sword Mode, with Wisemon. Knightmon gains Wisemon's scarf, and his sword is transformed into the Wise Sword, an enormous blade which flings energy beams. 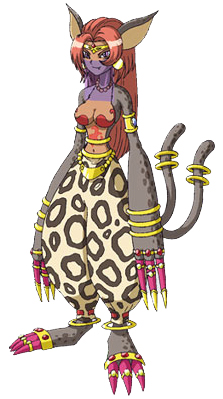 A cat Digimon who is the princess of Lake Zone. She seems somewhat incompetent, as she sleeps for most of the day. After Xros Heart frees Lake Zone, she joins them.

BalliBastemon, with Ballistamon. A really, really bizarre mashup of the two, throwing Bastemon's arms, head and clothing onto Ballistamon's body. 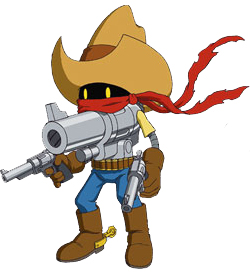 A Digimon with a gun for a body, having a cowboy motif. He joins Xros Heart after testing the group's heart. 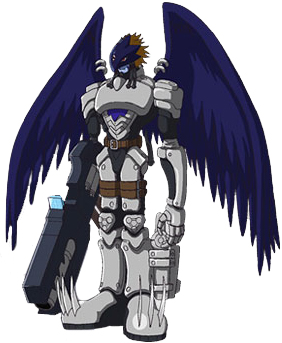 An aloof demon lord Digimon resembling a winged knight. He is the reincarnation of Reapmon, who sacrificed himself to save Shoutmon X4. He can DigiXros with Shoutmon X4 and X5 to become X4B and X5B, and has Xrosses with other Digimon as well. 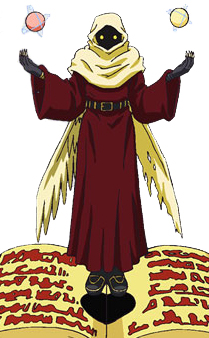 A Digimon researching the Digital World. He lives inside a book that acts as a laboratory and protection as he crosses the digital space. When Taiki ends up drifting between zones, Wisemon catches him to use a lab animal. He helps Taiki rescue his friends, then joins Xros Heart to continue his studies and provide analysis support for the army.

A trio of under-trained, red Monitamons who lacked confidence in their skill. It was only until they sneaked the Monitafort with Zenjiro did they gain confidence, allowing Nene to DigiXros them into Hi-Vision Monitamon. They joined Xros Heart to help communicate with Nene who will be leaving to search for her brother.

Shoutmon's childhood friend who also lives in the Green Zone. She was initially one of the dancers who entertained Taiki as a way for Shoutmon to get onto his side. The second time Taiki came into the Digital World, she was the one who was able to hide Taiki and Shoutmon's identities due to them being hit targets by the Bagra Army.

Joined the Xros Heart army in Episode 21 and about halfway through the manga. 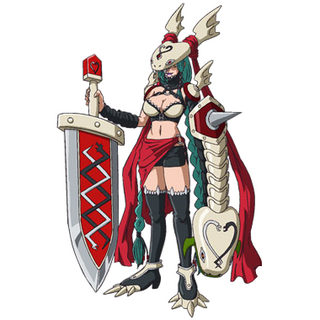 Nene's new main partner. She is a warrior Digimon who resides in Honey Land. She protects the Digimon there from Zamielmon's army. She wants to free Honey Land from Zamielmon's control and stop Ignitemon, her brother, from helping him in his evil deeds. After the defeat of Zamielmon she decides to join Xros Heart and after their battle against Yuu and DarkKnightmon she promises Nene to become her strength and becomes her main partner.

JetMervamon, with Sparrowmon. Mervamon is equipped with Sparrowmon's guns and jetpack, and as such has the ability to fly.
Mervamon Wide Hi-Vision Sword, with Wisemon and a Hi-VisionMonitamon. The sword Olympia Kai is upgraded with a powerful sensor array and a viewscreen from which Wisemon reports on what the sword detects.

Nene's younger sister and the replacement of Yuu in the Xros Wars manga. She was in a coma and trapped inside of a crystal, forcing Nene to help DarkKnightmon so he would free her. Luckily, Taiki and the others managed to free her and she joined Xros Heart as a general.