A seventh grader who leads and fights with Greymon and a large Digimon army. He eliminates enemies with cold and calculated methods, spreading the influence of his power so as to take over the Digital World. 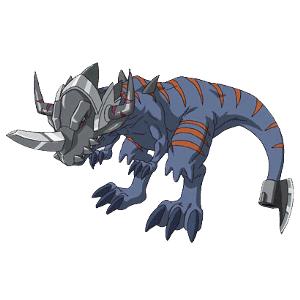 Kiriha's battle partner. A powerful combatant with the personality of an angry guard dog. 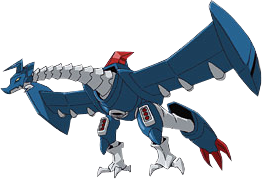 Kiriha's other primary Digimon. An armored bird with aerial capabilities, he can DigiXros with Greymon to form MetalGreymon...and does pretty much nothing else. 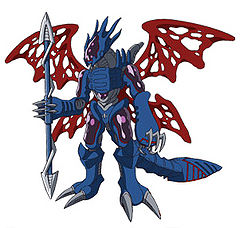 Another one of Kiriha's Digimon.

A young dragon Digimon who was fleeing from the clutches of Dorbickmon. He looks up to Blue Flare, much to Kiriha's chagrin.

An unnamed Digimon, with Cyberdramon. Dracomon grows larger and adds parts of Cyberdramon's armour to his body. The dub names this form CyberDracomon.

A group of reptile Digimon who serve Kiriha. They make up the bulk of the Blue Flare army, but are rarely seen, popping up only when Kiriha feels he needs force of numbers.

PawnGaossmon, with the Pawnchessmons. A variation of Gaossmon wearing PawnChessmon's helmet on its head and PawnChessmon shield on its back. PawnChessmon's spear is hidden under the shield and can be launched as a missile.

Digimon with the appearance of cartoon bombs with vaguely cetacean features. They generally act as living weapons.