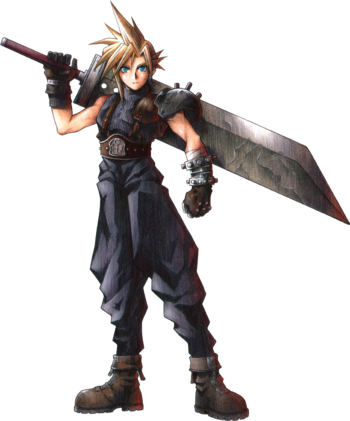 A former top-ranking member of Shinra's elite paramilitary unit, SOLDIER. Now working as a mercenary-for-hire, Cloud takes a job with the anti-Shinra organization AVALANCHE to bring down his old employers. It's revealed during the game that he isn't what he seems: Cloud failed to qualify for SOLDIER and instead took a job as an infantryman. During a mission to Nibelheim with Sephiroth and his best friend and SOLDIER 1st Class Zack Fair, Sephiroth went berserk and injured Cloud and Zack, who were taken away as lab experiments for Professor Hojo. Zack broke them out years later but died in the escape, and Cloud, suffering from a great deal of physical and psychological trauma, impressed Zack's memories on his own, creating a false past and a false personality to match it. After the truth is revealed he suffers a Heroic BSoD, but thanks to a Journey to the Center of the Mind, he comes to terms with who he is and rebuilds his persona from the ground up. 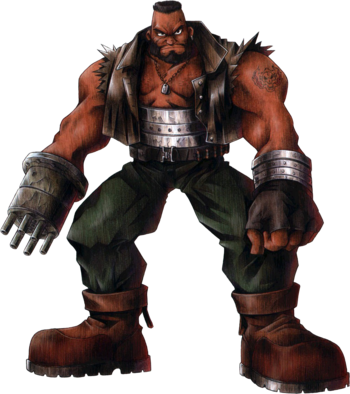 "You gotta understand somethin'... I don't got an answer. I wanna be with Marlene... but I gotta fight. 'Cause if I don't... the planet's gonna die. So I'm gonna keep fightin'!"

The boisterous leader of AVALANCHE, a group of eco-terrorists trying to prevent Shinra from draining the planet's life energy in the name of profit. His cause is actually a cover for a personal vendetta against Shinra. He later comes to terms with his grudge and accepts responsibility for the damage AVALANCHE caused, vowing to save the planet the right way. He lost his right hand in a Shinra attack and had it replaced with a variable prosthetic

"Uniforms, soldiers, war. I hate 'em all. They take away the things and people you love... I wish they'd all disappear."

A member of AVALANCHE and Cloud's childhood friend. She also owns a bar called "7th Heaven" in Sector 7 of Midgar. Though she realizes something is wrong with Cloud's memories she doesn't speak up until it's too late. After helping reform Cloud's true self she tries to support him and encourage him to find his own path that he wants. 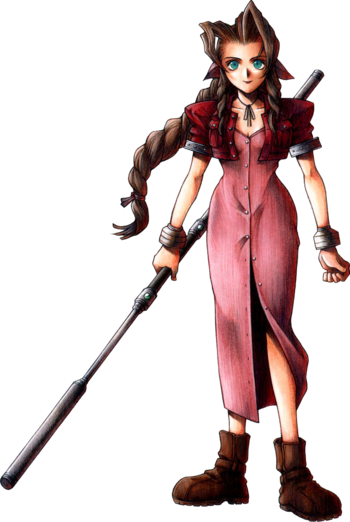 "Just hang in there. Someday we'll look back at these hard times and laugh."

A young woman who sells flowers for a living in the slums of Midgar. Her years on the streets have given her a outgoing, street-smart but caring attitude. She is the last living Cetra, a precursor race who were driven to extinction by JENOVA. Having dated Zack Fair for a number of months, she finds herself attracted to his shadow in Cloud. Her independent nature leads to disaster when she decides to take the burden of defeating Sephiroth all by herself, abandoning the party and traveling to the Forgotten Capital alone. This leaves her vulnerable to attack, and she is killed by Sephiroth. 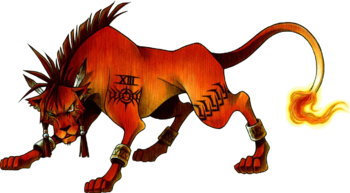 "What a fascinating story..."

A strange creature who joins Cloud's group after being rescued from the Shinra HQ. Red XIII was the name he received as a specimen designation while held captive and experimented upon by Professor Hojo. Even though he is 48 in human years, his age is comparable to around 15 to 16 years old by his own species' standards and is very wise. He fights alongside Cloud and his allies to fulfill his duty to the Planet to defend it as a warrior. 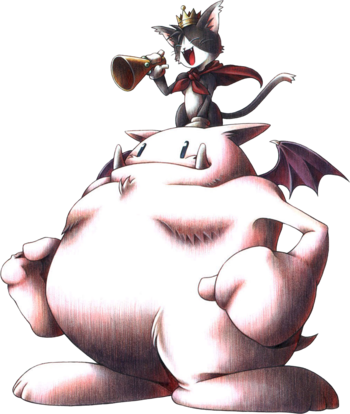 "There's plenty of stuffed toys like my body around, but there's only one me!"

A cat riding a giant stuffed toy Moogle, working as a fortune-teller in the Gold Saucer. He is really a puppet controlled from far away by Reeve, Shinra's head of Urban Development. Even though Reeve works with the evil Shinra, he develops a keen interest in saving the planet. He is useful to the party, as he knows all about the Shinra's plans. Despite his playful and carefree persona in the form of Cait Sith, Reeve is actually a sombre and serious man, though he does harbor a good heart with a natural worry for others. 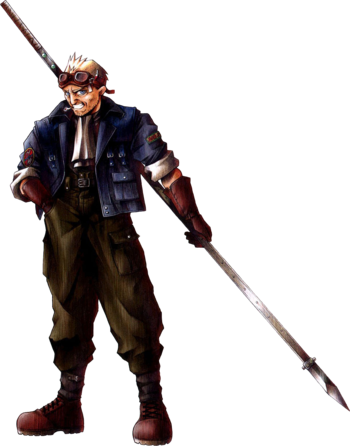 "Sit your ass down in that chair and drink your goddamn TEA!"

A gruff airship pilot with dreams of going into space. He is the most uncouth of the protagonists; he constantly swears and loses his temper, and chain-smokes cigarettes. Despite this, he has a good heart, and is even voted temporary leader of the party at one point. He fits into the archetype of a father type character. 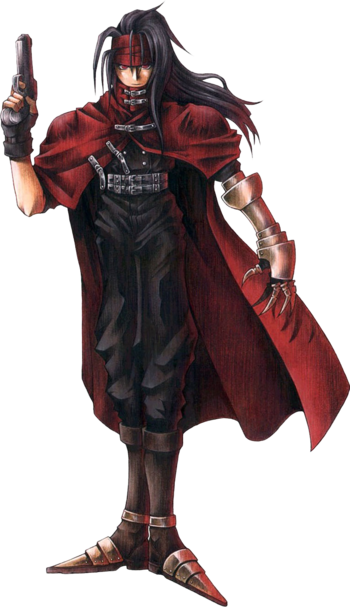 Main character of Dirge of Cerberus. He is a former member of the Turks with a mysterious past that ties him to Cloud and his group. 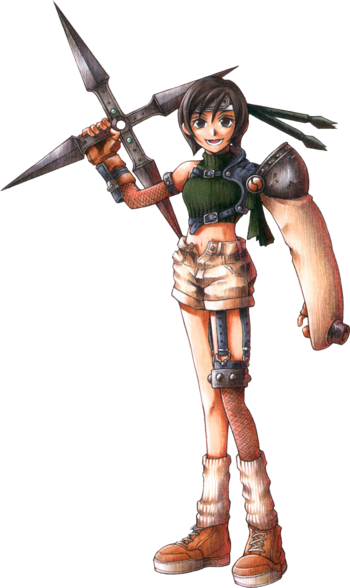 "I am the champion of the earth and the sky. I am the conqueror of evil. The single white rose of Wutai... Yuffie Kisaragi!"

An outlandishly-dressed ninja girl from the Japanese-lookalike town of Wutai. As a rebellious and cocky tomboy, Yuffie desires to restore her homeland Wutai to the glorious nation it was before being conquered by Shinra. Despite her sometimes obnoxious personality, she is friendly, helpful, and willingly helps the party in their battles. 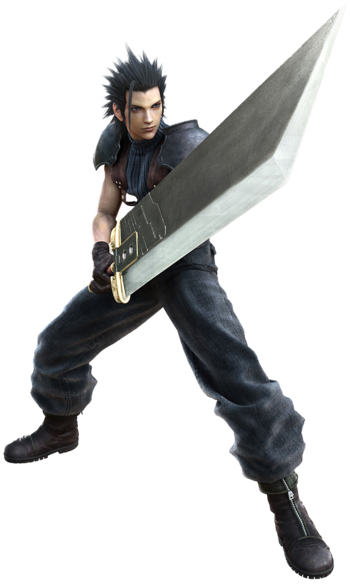 An energetic SOLDIER that was Cloud's best friend, he accompanied Sephiroth on the Nibelheim mission, where he was critically wounded and turned into a lab experiment for Hojo. Though he escaped several years later and took Cloud with him, he was caught and gunned down by Shinra. The dying Zack entrusted his Buster Sword to Cloud, who inadvertently also assumed a fake identity based on Zack's life and personality. Crisis Core explores his adventures prior to Nibelheim as he deals with the conspiracies that infested SOLDIER during its glory days.