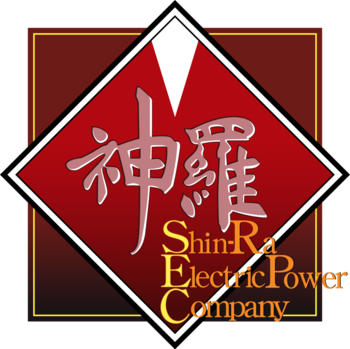 A Megacorp that effectively controls the planet due to their monopoly of mako, a highly efficient energy source that allowed them to corner the power market and expand their power and influence. Their headquarters is Midgar, an advanced metropolis in the middle of a wasteland thanks to their mako reactors draining the life from the region. 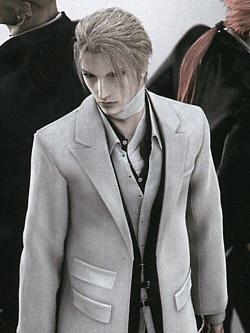 "I'll control the world with fear. It takes too much to do it like my old man. A little fear will control the minds of the common people. There's no reason to waste money on them."
Voiced by: Toru Okawa (Japanese), Wally Wingert (English)

Son of the president of the Shinra Corporation, he seizes control of the company when his father is killed by Sephiroth and uses its resources to try and track down the rogue soldier. He's apparently killed by Diamond Weapon near the end of VII, but is revealed in Advent Children to have survived. 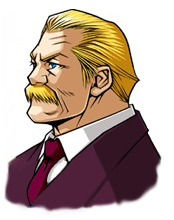 "These days, all it takes for your dreams to come true is money and power."

Previously the president of the Shinra Arms Manufacturing Company. The discovery of Mako energy catapulted him to the position of de-facto world dictator. However, once Sephiroth appeared on the scene, he was killed to be replaced by Rufus. 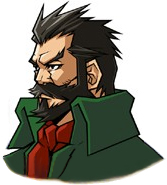 Heidegger manages the Shinra Public Safety department, and bungles it up nicely, too. Contrary to the name of his department, in practice Heidegger commands Shinra's military forces. 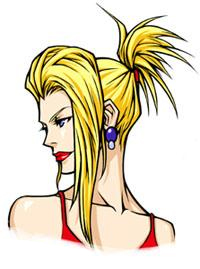 Responsible for the Shinra Corporation's Weapons Development department, Scarlet specializes in creating Glass Cannons. She's also the one who carried out the Corel Massacre, maiming Barret in the process and leading him to wage war on Shinra. 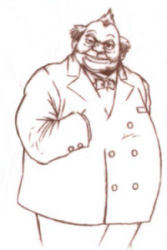 "Rate hike! Rate hike! Tra, la, la! And please include our Space Program in the budget!"

The director of the (defunct and defunded) Shinra Space Program. Unlike the other executives, he is almost totally useless, since his department has long been abandoned and Palmer himself is a total buffoon. 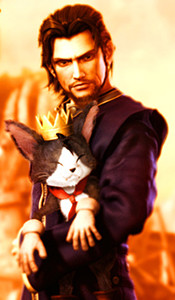 Appears in: Final Fantasy VII, Before Crisis, Dirge of Cerberus

The head of Shinra's Urban Development bureau, Reeve is the one who discovered how to refine Mako from the Lifestream and designed the Mako Reactors. He is also the pilot of Cait Sith. Following the events of VII, Reeve founds the World Regenesis Organization, dedicated to helping rebuild the planet.

The head of Shinra's science department, he leaves the company early in the game to pursue his own motives. He is actually the mastermind behind the Jenova Project and, by proxy, Sephiroth and SOLDIER.

Appears in Final Fantasy VII, Before Crisis, Dirge of Cerberus and Crisis Core. 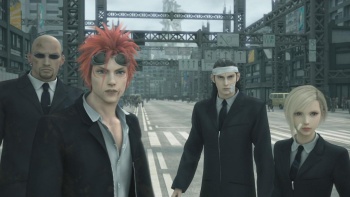 The Department of Administrative Research, unofficially known as the Turks, are Shinra's Black Ops unit. They carry out assassinations, blackmail, and forced recruitment of potential SOLDIER candidates. The group acts as general information experts in the expanded universe, and Before Crisis focuses on the history of their group, introducing more members that serve as the playable cast.

All of them appear in: Before Crisis, Crisis Core, FFVII, Advent Children.
Tseng 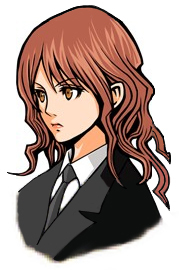 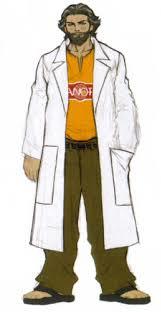 A Shinra scientist working on the Jenova Project years ago, he and Hojo competed to have the superior specimen in order to receive funding to continue their respective research. When Hojo's results were superior, Hollander was quietly forgotten by Shinra's executives and faded into the background, until Genesis was wounded and he seized a chance for vengeance against Hojo.

The former head of Shinra's science department, he led the expedition that unearthed Jenova. Believing her to be the remains of a Cetra, he began the Jenova Project to try and imbue a normal human with her abilities. When he realized what Jenova really was though, he left Shinra to continue studying the Cetra with Ifalna; eventually, the two of them gave birth to Aerith. 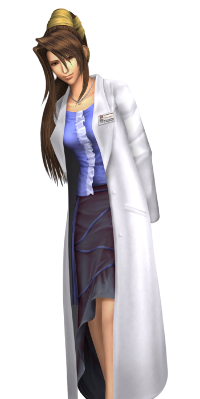 A Shinra scientist working on the Jenova Project, she was Hojo's lover and consented to use their unborn child as an experiment for the Project. Horrified by visions of what her child would become, she sealed herself in a cave, ashamed of her role in Shinra's rise to power.