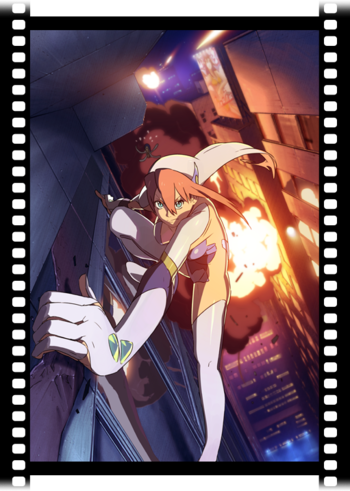 Tsutomu Senkawa was an ordinary teenager living in Tokyo. Birdy Cephon Altirra/Altera/Altaria is a beautiful and impulsive Space Cop on a mission to stop a plot by alien criminals that involves Earth. One night, during a battle with the alien fugitive Geega, "Berserker Killer" Birdy accidentally attacks Tsutomu, fatally injuring him. To save his life, Birdy has to merge with him. Now, as Tsutomu gets used to Sharing a Body with a girl, they both have to work together for Birdy to complete her mission while trying not to interfere with his ordinary life.

Called Tetsuwan Birdy in Japan, Birdy the Mighty started as a manga that was left unfinished in the 1980s by Masami Yuki. The animation studio Madhouse with direction by Yoshiaki Kawajiri and writing by Chiaki Konaka made a four-part OVA series in the 1990s that finished part of the plot, but still left loose ends. In 2002, Masami went on to do a reboot named Birdy the Mighty II, starting the story over from the beginning. The series ended after twenty volumes, and a new series after a time skip called Tetsuwan Birdy: Evolution ran for thirteen volumes. An epilogue chapter was later published in Weekly Big Comic Spirits, fully completing the envisioned story in 2012. In 2008, a TV series, Tetsuwan Birdy Decode (Birdy the Mighty Decode), with direction from Kazuki Akane of The Vision of Escaflowne fame, premiered, and in January 2009, the second season, Tetsuwan Birdy Decode 02 (Birdy the Mighty Decode 02), premiered. However, Decode is a loose adaptation set in an Alternate Continuity from II and Evolution.

Decode can be found on Funimation's Youtube channel here.