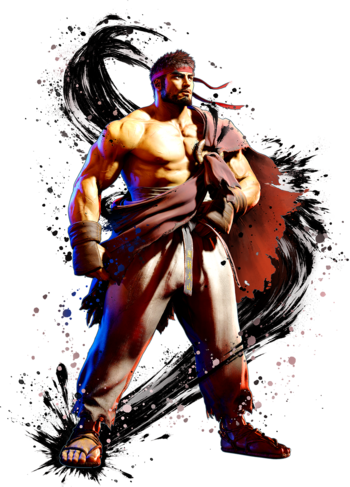 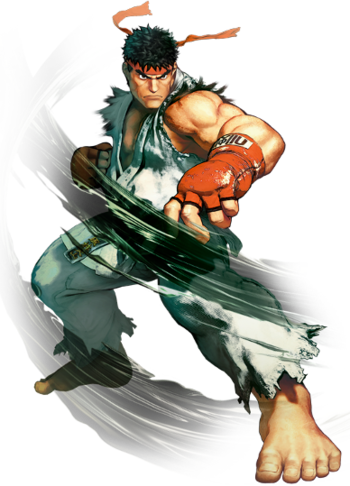 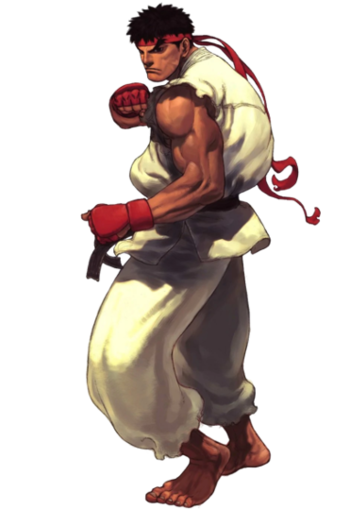 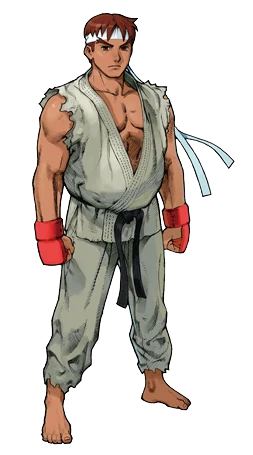 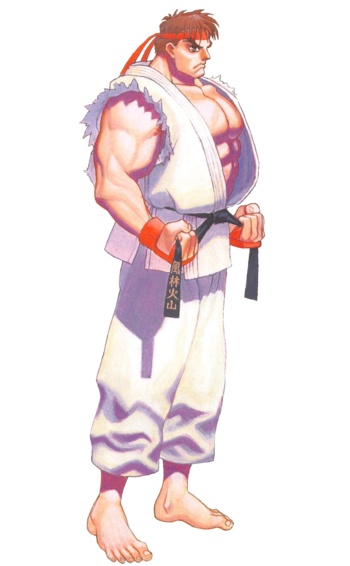 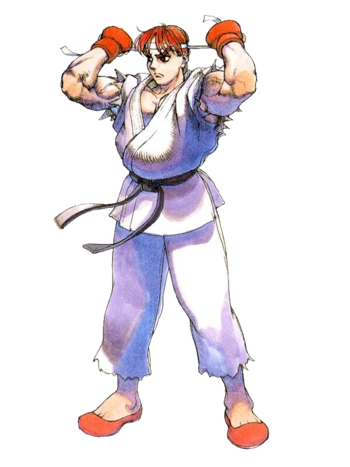 The answer lies... in the heart of battle.
Origin: Japan

His Evil Ryu version has been present in the Alpha and EX series, and has made a reappearance in the arcade edition of Super Street Fighter IV.

As the fighting game character, Ryu is also the originator of what is now commonly known as the Shoto archetype. This eventually became integrated into his storyline. What Ryu lacks in natural talent, he makes up for in limitless potential, honing his moves to optimal efficiency. He is a simple, but very effective character with a fireball for controlling space, a rising uppercut for catching aairborne opponents, and a spinning kick which knocks the opponent down and is immune to other projectiles. Later games would expand on his fighting style while staying true to its core principles, adding various elements such as fire and lightning, corresponding to the Satsui no Hado and Mu no Ken respectively.
Advertisement:
open/close all folders
A-I
J-Z
Evil Ryu 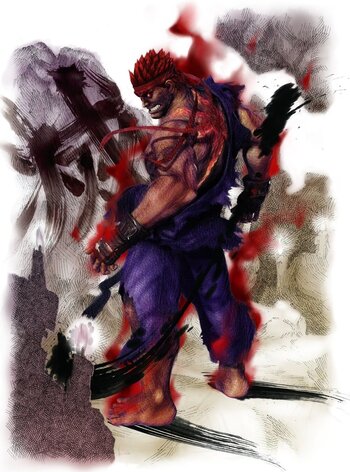 Embodiment of the Satsui
Violence...is who I am!
Origin: Japan

Fighting style: Unknown (martial arts rooted in Ansatsuken)
Voiced by: note Toshiyuki Morikawa (Street Fighter Alpha 3, Capcom vs. SNK, Capcom vs. SNK 2, Namco × Capcom), Hiroki Takahashi (Super Street Fighter IV: Arcade Edition; Japanese), Kyle Hebert (Super Street Fighter IV: Arcade Edition; English)
When Ryu fought Sagat in the first tournament, he was beaten to the point of near-death. Sagat, already battered from the fight, approached Ryu to deliver the final blow, but at that moment, something awoke within Ryu. That "something" was the Satsui no Hadou, and it forced Ryu, against his will, to deliver a cheap-shot Metsu Shoryuken to Sagat, scarring him for life. It then lay dormant within Ryu until the appearance of Akuma. After that incident, the Satsui no Hado began to manifest within his mind as "Evil Ryu", a corrupt, warped version of himself who craves only a fight to the death and delights in others' suffering and pain. It is for this reason that many forces have targeted him, such as M. Bison and Seth, who wish to force this side of Ryu to the surface and attempt to manipulate it, turning Ryu into their own personal weapon of mass destruction.

In Super Street Fighter IV: Arcade Edition, Ryu is rendered unconscious after a grueling battle with Seth. The BLECE generator resonates with his Satsui no hado, bringing Evil Ryu to the surface. After killing several remaining S.I.N. grunts, he wanders seeking worthy opponents. His path is cut short by the revived Gouken, who uses the Mu no Ken (Power of Nothingness) to seal away the Satsui no Hado again, bringing Ryu back to his senses. However, it still lingers within, waiting for the chance to finally seize control of Ryu for good.