A human nation of the New World and one of the three major human nation neighboring Nazarick. The kingdom is currently in a state of political disorder and civil unrest between the Royal Faction and the Noble Faction.
In General 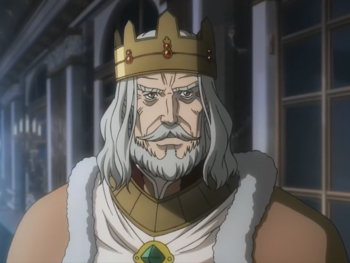 The current king of the Re-Estize Kingdom. He is the father of Barbro, Zanac and Renner. 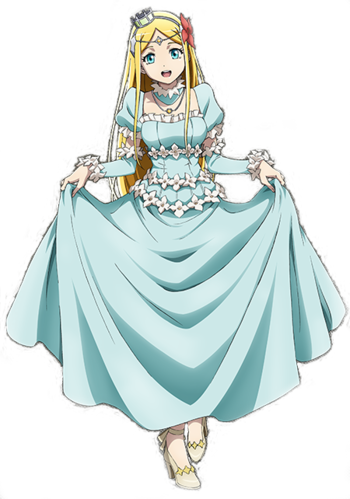 The Third Princess of Re-Estize Kingdom. She is the childhood friend of Climb. She is also know as the Golden Princess for being a reformer for major changes within the kingdom and her immense beauty.

She is the youngest daughter of Ramposa III and younger sister of Prince Barbro and Prince Zanac. 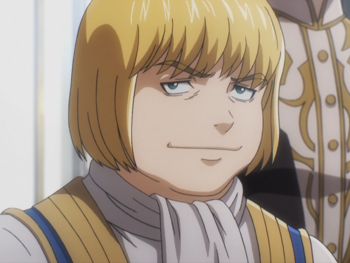 He becomes the Crown Prince of the Kingdom after the First Prince's death. 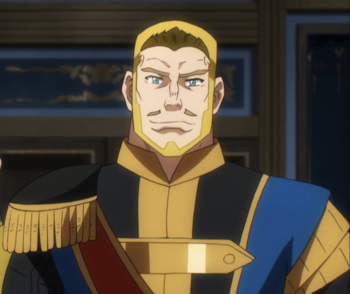 The First Prince of the Re-Estize Kingdom, son of Ramposa III, and older brother of Renner and Zanac. He was killed by Lupusregina Beta after he attacked Carne Village. 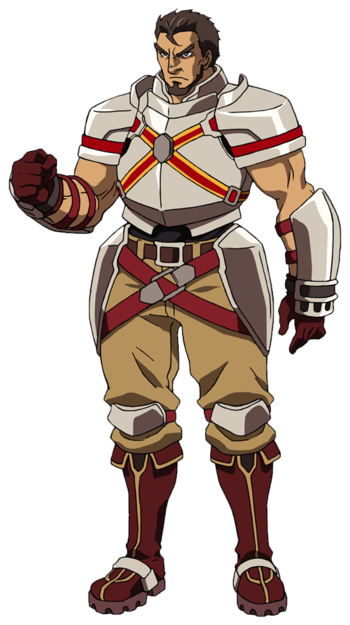 The Warrior Captain of Re-Estize Kingdom. He is, or rather, was the King's personal bodyguard and is considered to be the Strongest Warrior of the Kingdom. 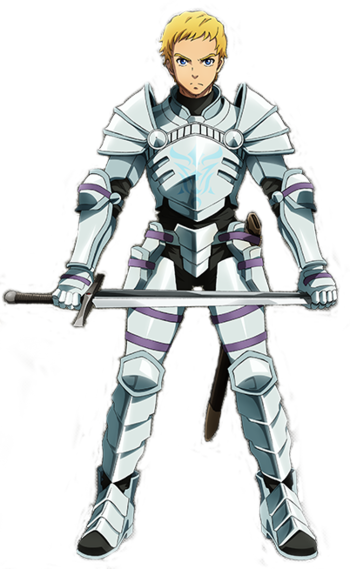 The personal bodyguard and childhood friend of Renner Theiere Chardelon Ryle Vaiself. He wants to become stronger for her sake.

A member of the Six Great Nobles. He is also the leader of the Noble Faction. 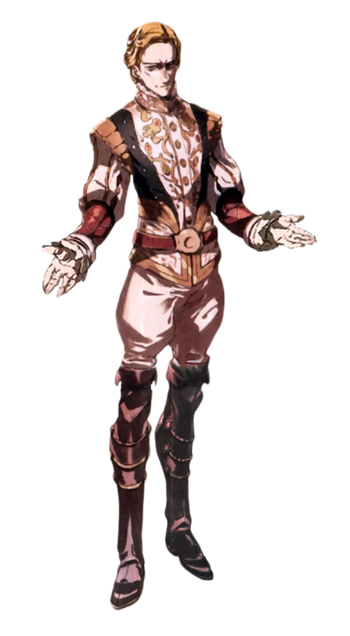 The leader of the Royal Faction and the most powerful noble amongst the six major nobles in Re-Estize Kingdom.

A fortress city of Re-Estize Kingdom situated at the border between the Baharuth Empire and the Slane Theocracy. It is currently under the control of Nazarick after the massacre of the Kingdom's Army.
Pluton Ainzach 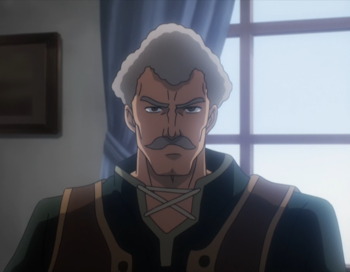 A famous pharmacist in E-Rantel. He is the grandson of Lizzie Bareare and the Childhood Friend of Enri Emmot.

An iron ranked adventurer whose hard-earned potion was broken by Momon, but was compensated with a new but unknown one. She later retired and went to live in Carne Village.

A village located on the border between the Baharuth Empire and the Re-Estize Kingdom, to the south of the Azerlisia mountains with a vast forest and the hometown of Enri and Nemu Emmot. It was recently attacked by the knights of the Slane Theocracy and was saved by Ainz, after which it fell under his unofficial protection.
Enri Emmot

A villager girl from Carne Village. She is the older sister of Nemu Emmot and the Childhood Friend of Nfirea Bareare. She commands a goblin troop whose loyalty is ensured both by her being their summoner and by her growing ability as the commander class, which allows her to recruit subordinates. 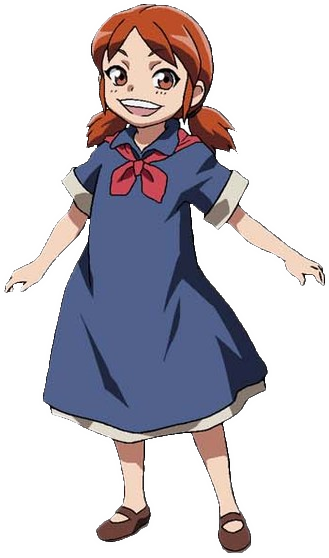 A villager girl from Carne Village and the younger sister of Enri Emmot. 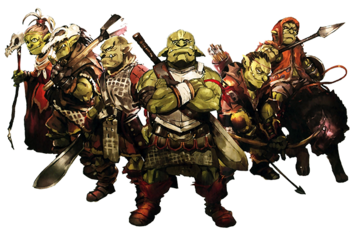 A group of summoned goblins that are loyal to Enri Emmot. This troop is later joined with an entire army of goblins.

A group of recruited goblins and ogres that live in Carne village loyal to Enri Emmot.

A warrior turned mercenary after he lost to Gazef Stronoff in a grand tournament to determine the strongest fighter in the Re-Estize Kingdom.

Tuare is a former brothel slave rescued by Sebas whilst he was undercover in the city.

She later becomes a maid apprentice of the Great Tomb of Nazarick under Sebas Tian's supervision and also one of the few known humans in Nazarick under the protection of Ainz Ooal Gown. She is the older sister of Ninya of the Swords of Darkness. 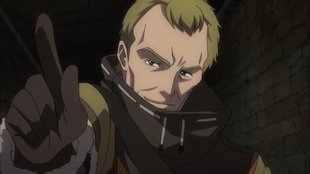 A nameless (until "the very end") ex-adventurer of the Orichalcum level in Raeven's employ. He's sent to accompany Climb and Brain on their mission to rescue Tsuare. 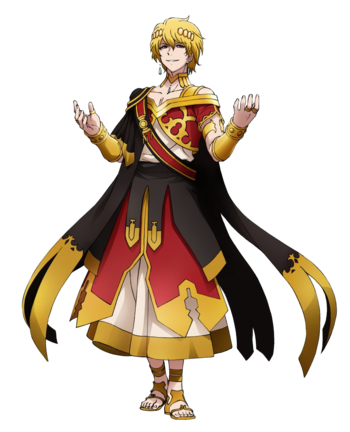 The current emperor of the Baharuth Empire. He is also known as the Blood Emperor for purging many of the nobles after his ascension to the throne. 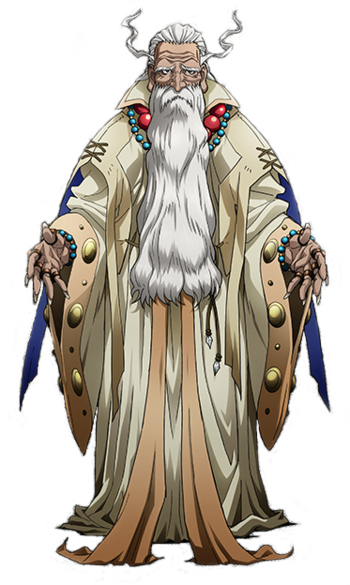 The Prime Wizard and the greatest guardian of the Baharuth Empire. He is considered to be the Strongest Wizard of the Empire. His abilities are comparable to those of the Thirteen Heroes.

Born in a back alley in abject poverty, he struggled and trained to become one of the four top imperial knights.
Nimble Arc Dale Anoch
Voiced by: Jun Kasama (Japanese), Jordan Dash Cruz (English)

The second of the listed four top imperial knights. Second born son of a baron with an elder brother, an elder sister, and a younger sister.
Leinas Rockbruise
Voiced by: Ai Kakuma (Japanese), Natalie Hoover (English)

The third of the listed four imperial knights. Formerly the daughter of a noble family, she took up the sword to earn her noble distinction by slaying monsters on her family lands. Fighting one monster, she was struck by its death curse. This curse marred half of her face with an incurable disgusting state constantly secreting pus. Her family cast her out purely on the fear of a scandal, and her fiance dumped her like a hot potato. Jircniv help her get her revenge in exchange for serving as one of his imperial knights.
Osk
A merchant and the promoter of the 8th Martial Lord.
Go Gin 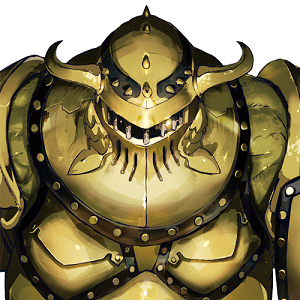 A War Troll recruited to be a gladiator in the Imperial Arena and its current champion, holding the title of 8th Generation Martial Lord.

A human nation of the New World and one of three major political powers neighboring Nazarick. It is a religious nation that worships the Six Gods and violently supports the ideology of human supremacy.
In General

One of the Six Scriptures in the Slane Theocracy. They specialize in the extermination of demi-human villages.
General
Nigun Grid Luin

The leader of the Sunlight Scripture. 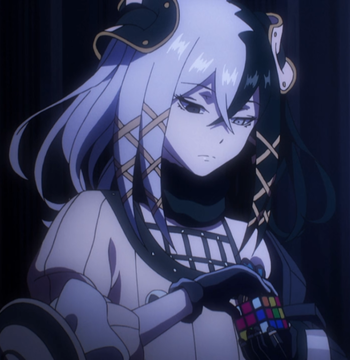 A member of the Black Scripture.

The user of the World Item, Downfall of Castle and Country.
Belius 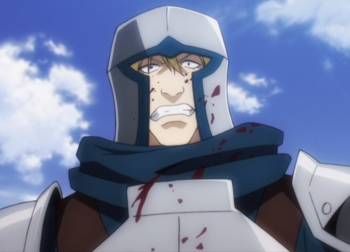 The leader of the knights who attacked Carne Village.
Londes Di Clamp 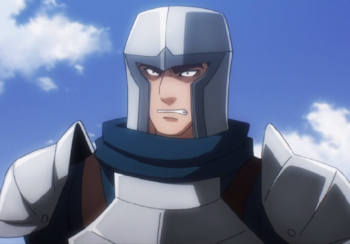 One of the knights who attacked Carne Village.

A human kingdom that was founded by a Dragon Lord, whose descendants serve as the royal family. It is constantly harassed by the Beastman Country.
Draudillon Oriculus
Draudillon Oriculus is the queen of the Dragon Kingdom, being a mostly-human part-dragon descended from the draconic founder. She can use Wild Magic, but requires mass-sacrifice to do so. Most of the time, she disguises herself as a child to help put those she talks to at ease. Her court is apparently full of lolicons, though some of this may be paranoia on her part, and she complains about their perverted gazes.

A human nation found south west of the Re-Estize Kingdom. It is a religious country that is constantly being harassed by demi-human tribes.

The Capital city of the Holy Kingdom.
Calca Bessarez

Calca Bessarez is the Holy Queen of the Roble Holy Kingdom.
Kelart Custodio

Kelart Custodio is the high priestess of the Roble Holy Kingdom and the younger sister of Remedios Custodio.
Neia Baraja

Paladin Order is a military order in the Roble Holy Kingdom that specializes in fighting evil aligned entities.
Remedios Custodio

Remedios Custodio is the leader of the Paladin Order, a member of the Nine Colors, and the older sister of Kelart Custodio. Alongside her sister, Remedios was known as the genius Custodios, the twin wings of the Holy Queen, and she also the personal bodyguard of Queen Calca Bessarez.