This is a Character Sheet for the Mega Man Star Force trilogy. After three games and an anime series, there are plenty of tropes to go around — too much, in fact, for one page to handle, so it's been broken down and given three additional pages:

These are character notes on Geo and his Inner Circle: these characters form the central cast, who are present in every game. Included here are Geo Stelar, Omega-Xis, (Mega Man), Luna Platz, Bud Bison, Zack Temple, Sonia Strumm, and Lyra.
open/close all folders
The Group as a Whole 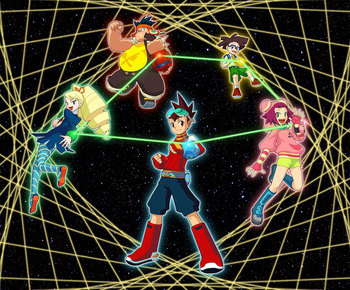 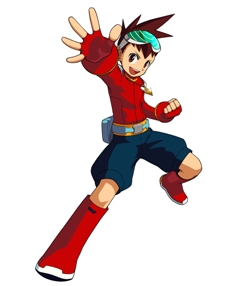 "Great. Someone else to complicate my life."

The main character of the series. Technically a fifth grader at Echo Ridge Elementary, Geo hasn't actually attended school in three years, ever since he first received news of his father's space station accident. Instead, Geo spends his days at home, messing with gadgets and using a distance-study program through a Navi provided by the school. In private, he dreams of one day becoming an astronaut, so he can travel after his father and hopefully find him.

This lifestyle is abruptly shattered one day by two sudden introductions: the first is Luna Platz, a fellow student and Class Representative of Geo's class, who has taken it upon herself to drag Geo out of his shell and back into class, come Hell or high water; the second is Omega-Xis, a creature from another world who pushes Geo to live a little. Of the two, Geo is more interested in Omega-Xis, and specifically the news he brings with him, both about his father and of the alien monsters trying to hunt him down.

See Mega Man for tropes pertaining to Geo and Omega in superhero form. 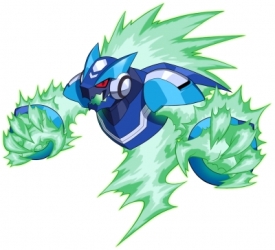 "Hey kid, stop screaming like a girl and hear me!"

An alien that fell from the sky and landed on Geo. This rowdy, loud-mouthed FM-ian knows what happened to Geo's father but insists on keeping mum, not in small part to keep Geo doing as he says. It is with Omega-Xis' power that Geo becomes the new Mega Man; unlike the other FM-ians, Omega-Xis cannot control Geo's mind while they are fused, and so he has to depend on the kid's ability to fight, which is...lacking.

It is later revealed that 1) he was one of the aliens who attacked Kelvin's space station, and 2) turned him into an EM-being in order to save his life. 3) Omega-Xis is also not an FM-ian, but an AM-ian, a survivor of FM's destroyed sister planet, and finally 4) he is also carrying the Andromeda Key, which activates Planet FM's Planet Eater superweapon. While the going is rough, eventually he and Geo form a strong alliance and become lasting friends. 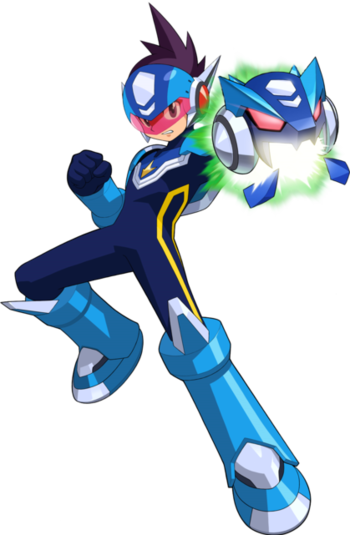 The eponymous hero of the series, Geo's and Omega-Xis' Fusion Dance. Unlike many of their opponents, Geo and Mega both retain their distinct personalities as Mega Man, with Geo as the main figure (and the one most people speak to) and Mega as the Buster. 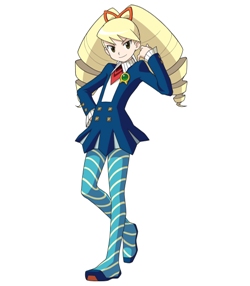 "Consider it an honor that you were able to become my Brother!"

5-A's one-and-only Class Representative, Luna practically radiates ambition, and, more importantly, knows how to achieve hers. In the long term, she seeks to become the next Student Council President, but to do that, she's going to need a fair bit of the public eye; and what better way to do that than to associate with the talk of the school, the mysterious phantom student, Geo Stelar? And so, of course, she decides to get Geo back to school, much to his chagrin. Note the Irony with the instant crush she gets on Mega Man when he first saves her life early in the story.

Eventually, she succeeds, at which point we find out that there's a lot more to her than meets the eye. While fairly abrasive towards Geo, she's actually very concerned with the well-being of her classmates and is even prone to the odd act of kindness. However, she's also burdened by the heavy expectations of her rich and industrial parents, which reaches a breaking point late in the first game when she overhears them planning to transfer her to an out-of-town school (they've been hearing rumors of her involvement in the strange incidents around Echo Ridge). 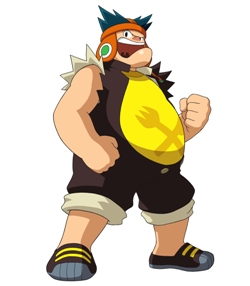 "The Class President gave an order, so just come along quietly!"

The first of Luna's two main subordinates, and, eventually, one of Geo's friends. While Luna's extra muscle comes across like a tough guy (which, to be fair, he is), he also nurtures a hidden, softer side and enjoys being with his friends almost as much as a good meal. After getting scolded harshly by Luna for messing up her efforts to get Geo to come to school, his loneliness reveals him to the invading FM-ian Taurus in the first game. Taurus' influence remains with Bud the whole series become a team in the third game. To avoid immediate spoilers, Taurus is listed under the FM-ians section on the Pegasus, Leo, Dragon sheet. 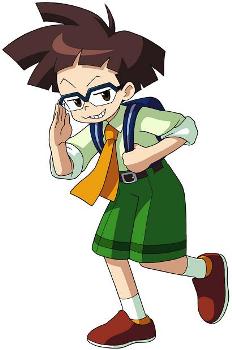 "I must tell this to the Prez!"

The second of Luna's two main subordinates, and, eventually, one of Geo's friends. Zack is Luna's extra brain, helping to organize her schedule and to develop her plans; in fact, it was on Zack's suggestion that Luna began hunting Geo down. Small and eager, Zack is usually the first of the group to seize onto a new idea and goes to great lengths to convince Luna the idea is worthwhile, though this is often Hit-Or-Miss for him. In keeping with his status, Zack also owns a miniature database called the Zackpedia, which is adminstered by his Wizard Pedia.

Behind closed doors, he laments his inability to be of any particular use to Mega Man after they become friends, since he can't offer emotional support like Luna or supply physical muscle like Bud. To his credit, however, his capacity for research is second to none; Geo's taken care of several serious threats based on information he's received from Zack. 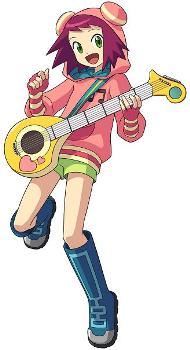 "The manager is a butthead! The music producer is a fried octopus ball! Songs come from the heart!"

This young lady is something of a celebrity, an Idol Singer, in fact. Introduced in the first game, Sonia became a singer in order to make her mother happy, but after her mother died, her manager began using her success for his own financial gain. Her depression is what called Lyra to her, and after being defeated they both become allies. Like Geo, Sonia can't have her mind controlled by Lyra and so relies in her own fighting strength during battles. Together they become Harp Note. She is the first person Geo forms a brotherband with.

Note: Tropes specifically about Lyra, or about Harp Note's form and abilities are under Lyra's section below. 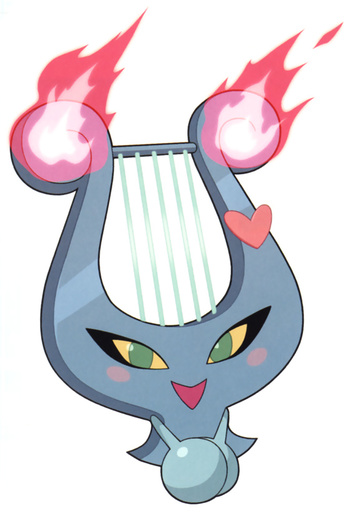 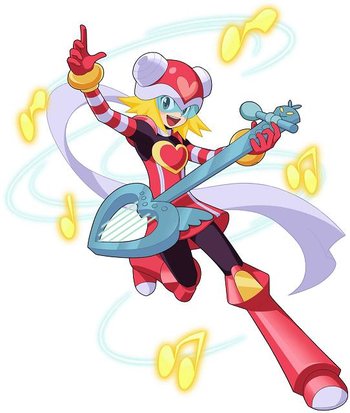