This is a Character Sheet for the third game in the Mega Man Star Force trilogy. Click here to return to the main character sheet.

open/close all folders
Characters Introduced in the Third Game

Wizards are man-made EM Beings that serve as the Star Force universe's equivalent to NetNavis, helping humans with everyday life. However, due to the increasing levels of Noise, and the machinations of Dealer, more and more Wizards have been going out of control.

Luna Platz's personal Wizard who serves to help her look her best and keep track of her social life.

Zack Temple's personal Wizard, who serves as the administrator of Zack's Zackpedia. 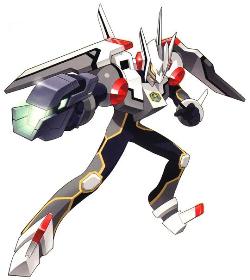 A high ranking member of the Satella Police in the third game and the leader of the Satella Police Commandos in charge of investigating incidents involving out-of-control Wizards as well as the criminal organization, Dealer. It's later revealed that he was a former member of Dealer and he was romantically involved with Queen Tia. When he left Dealer, he attempted to take Tia and Jack with them but failed.

Ace's personal and powerful Battle Wizard. A Wizard outfitted with powerful analytical capabilities. He is also the only man-made Wizard with the ability to EM Wave Change, specifically with Ace to form Acid Ace. Unfortunately, Wave Changing takes a severe toll on Ace's body, thus Acid is built with an automatic timer to cancel the Wave Change when he hits his limit.

A fellow student at Echo Ridge Elementary and head of the science club whose dream is to launch a rocket into space. Geo and the gang help make that dream a reality. He later returns the favor and helps Geo get to Meteor G with another rocket.

Woody's two Rocket Specialist Wizards. Magnes was set to pilot Woody's experimental rocket into space, but Tia and Jack slip a Noise Card on him, causing him to become the Noised Wizard Spade Magnes. He attempted to destroy the school by causing the rocket to explode, but Geo manages to bring him to his senses. He later becomes an integral part of the plan to help Geo get to Meteor G.

One of the employees at WGB Studios. He is a Real Wave expert in charge of managing Sonia's Event Stage for her concert. His dream is to one day work for the Satella Police. This dream becomes a reality when the Satella Police asks him to repair a Wave Station to help Geo reach Meteor G.

Belle is an aspiring idol who works hard everyday and has her Wizard, Ice, as her manager. Ice constantly encourages her to have the drive to succeed, but Belle is such a sweetheart that she isn't willing to follow through the less-than-squeaky-clean methods Ice might suggest. 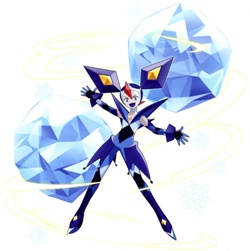 Ice is Belle's personal assistant and manager, and comes prepackaged with all the ambition Belle never seems to display. Problem is, Ice lacks much in the way of moral restraint... which problem is compounded when she gets hits with the Diamond Noise Card provided by a certain Dealer operative. As the Noised Wizard Diamond Ice, she decides to take matters into her own hands... and Sonia is having an outdoors concert that day, isn't she? 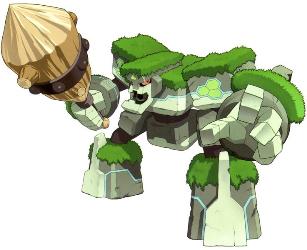 The Wizard that controls the environmental system at Alohaha Castle. He gets mutated by a Noise card and transforms into Club Strong. With his new power, he attempted to take over Alohaha Island, but was stopped by Mega Man. He is the first victim of the Dread Lazer, but is later restored by Aaron Boreal, who tells Geo he was unable to find and re-integrate all of the original data, and that the current incarnation is a Soulless Shell. Later, however, if Geo returns and continues to talk to Strong afterwards, that he is slowly getting better.

One of the greatest scientific minds in the world. She acts as Mission Control to Geo and the other Commandos, giving them missions and helping out when needed.

The head of NAXA.

A strange Murian creature that serves as Solo's Wizard. As Solo can EM Wave Change on his own, Laplace instead transforms into the powerful Laplace Blade.

Dealer and Other Antagonists (SPOILERS)

A group of cyber criminals led by the malevolent Mr. King. The King Foundation merely serves as a front for his criminal activities. Their goal is to take control of Meteor G and use its power to disrupt EM technology to take over the world. 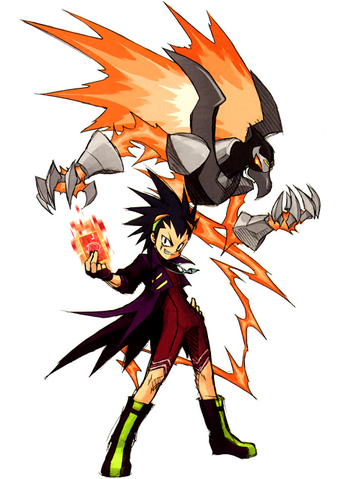 A young man who recently joined Echo Ridge Elementary as a transfer student alongside his sister, Tia, who herself is a new teacher. Cold and distant to all but his sister, he is at first adverse to the idea of being friends with Geo and the others, but started to warm up to them during the trip to Alohaha. Then it's revealed that both he and Tia are members of the organization Dealer and he can EM Wave Change with an FM-ian criminal called Corvus. 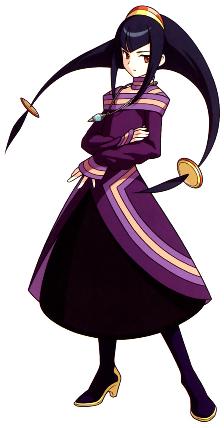 A young woman who came to Echo Ridge Elementary with her brother Jack to serve as a new teacher for the school. In contrast to her brother's fiery temper, Tia is calm, cold, and aloof even in the most dire of situations. During the trip to Alohaha, it is revealed that she and Jack are members of the organization Dealer, and she can EM Wave Change with an FM-ian criminal named Virgo. 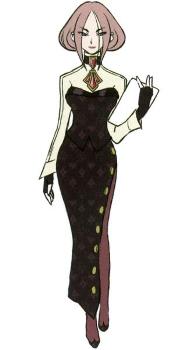 The fourth and final underling member of Dealer's Five-Man Band, named after the last suite of playing cards after Spade, Diamond, and Club. King's personal assistant, with all the stylings of a secretary. She handles most of his personal affairs and has even been known to distribute his orders to the membership of Dealer. King trusts her the most of all his subordinates, and has even been known to banter playfully with her. The sap, as the woman who goes by "Heartless" actually works for WAXA and is actively working to bring her old friend Kelvin Stelar back to Earth (who is inside Meteor G, doing his best to stall its advance). 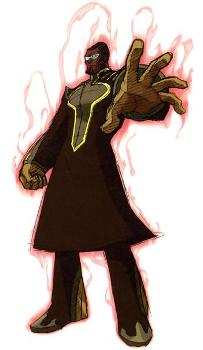 Joker is the newest member of Dealer's Five-Man Band and Mr. King's new chief field agent, supplanting even veterans like Jack and Tia. His high-ranking causes no small suspicion in Jack and Tia, especially considering he joined right before the events of the game. He's actually King's Wizard, and has freaking insane combat abilities. 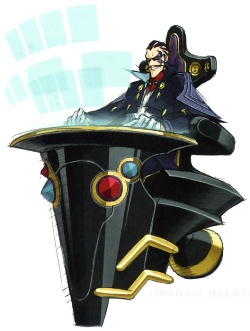 Wizard: Joker.
"And once I have that shooting star in my hands, every worthless human will kneel down before Dealer. Yes... Humans are indeed weak, brittle, and foolish creatures. Which is why they are always in such a rush to get new "Brothers" and create new "Purposes" with them. Humans need me to rule over them... I will give this planet new life... I will show them the true reason to live... All foolish humans will be under Dealer's control once I have Meteor G in my hands..."

To the world at large, Mr. King is an extremely magnanimous philanthropist whose institution, the King Foundation, funds and founds charity organizations the world over; the Foundation is behind everything from orphanages to entire shopping malls themed around the entertainment of children. To the characters we know and love, however, King is a grossly malevolent figure whose machinations for world dominion have caused no end of trouble. He is the mastermind behind the wizards going rogue, which release Crimson once defeated, which is harvested with the intention of gaining control of Meteor G, which will allow him to take control of the world. His philantropist publicity is nothing more than a guise to the public; in truth he's a total megalomaniac that couldn't care less about anyone but himself. 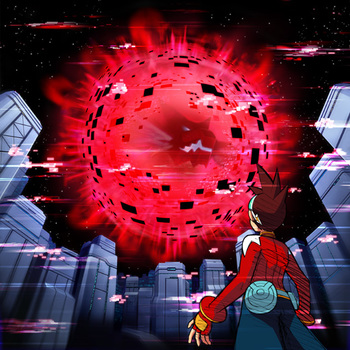 Seen from the outside, roaring from the insides of Meteor G 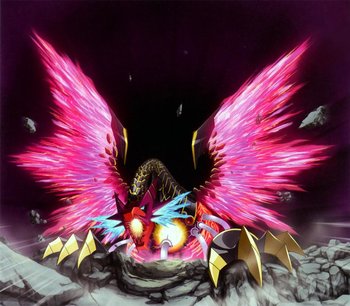 I will lead Earth to its destruction. I am Crimson Dragon!!
The Final Boss of Mega Man Star Force 3, and the embodiment of Meteor G's core, a meteor made entirely out of Crimson (solidified noise). The last opponent that Geo has to take down in order to save the world.

An EM being who hails from the moon that serves as the optional boss of the third game. According to Mega, he was a powerful warrior but recently decided to become a singer. His singing career causes him to take to the NAXA Astro Wave for his Moon Disaster 10-hr Concert Extravaganza. However, it causes a traffic holdup on the Astro Wave, prompting Mega Man to... convince him to go somewhere else. 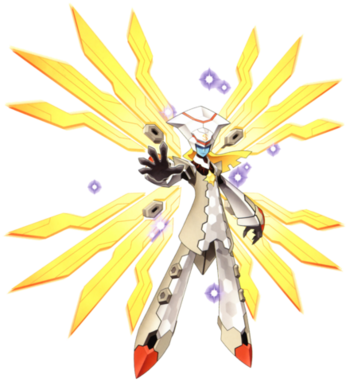 "Everything here will cease to exist. A black hole has no need for such things as emotions. You should... be happy. You will live forever within the darkness. You will be mine."

A mysterious and very powerful EM Being who serves as the administrator of the Black Hole Server. He is a very childish being who views the entire universe as his plaything. To that end, he uses his Black Hole Server to consume entire planets for his "collection". He also reconstructs fallen EM Beings to be his servants, having them scout out new planets for him to collect. His newest target is Planet FM, putting him in Mega Man's crosshairs when Cepheus sends an Astro Hertz to ask for his help.