This is a Character Sheet for the second game in the Mega Man Star Force trilogy and the Tribe anime. Click here to return to the main character sheet.

Lady Vega is the brillaint scientist whose research laid the foundation for the modern marvel of Matter Wave technology. In the anime, she's also responsible for Radio Composer technology. She first appears in the anime as the source of a mysterious summons for Subaru at Kodama University, where she reveals that not only does she know him, she knows about Omega-Xis, too. She's contacted them to help her seek out the OOPArts, mysterious artifacts related to the lost continent of Mu, to protect them from those who would misuse them.

She is in fact pursuing the OOPArts to misuse them. All tropes about her villainy and her game incarnation should be located under her Neo Mu Empire entry. 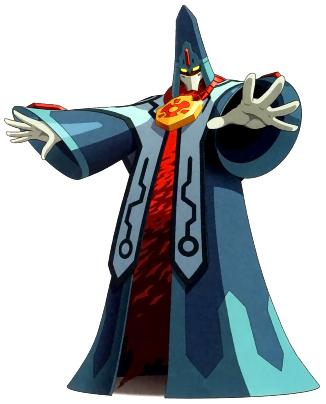 Vega's personal assistant in the Tribe anime. He doesn't say much or do much at first. All tropes regarding Hollow as the Dragon are handled below.

Wizard: Laplace
EM Human: Rogue (Burai)
Trans-Code: 002
"I don't need anybody's help in a fight. Just the thought alone makes me sick... It's not in my blood!"

Solo first appears in the second game as a mysterious operative working together with Hyde and his employers, entering the scene in the same chapter as the OOPArt, to which he has a strange connection. As we learn more about him, we discover that he is a scion of the legendary continent of Mu, indeed, the Last of His Kind, and that he seeks to restore his lost civilization to geatness. He expresses a consistent hatred for the concept of friendship (since the main experience he had with it as a child was of people ganging up on him), but currently works with Hyde and company to avail himself to their resources and for the general increase in efficiency. He also appears in the anime, but is completely independent and has altered motives.

Solo's primary goal in life is to preserve and restore Mu, and so he takes violent issue with anyone who misuses the technology; he is hunting Dealer operatives in the third game to reclaim the Murian technology they stole and have been using to control Noise. While he still professes a hatred of so-called friendship, he picks up an ally, a strange Murian creature named Laplace, which serves as his Wizard.

Lana and her Grandfather

A girl and her grandfather who find Geo shivering on their doorstep in the Himanara mountains. Their village is under attack by Yeti Blizzard, which strangely coinincides with the attempt by Gori Monjirou to purchase their land.

One idol among many featured on television with Misora. She has no real role in the anime except to go after Misora when the latter ditches the show to go exploring the Himanara Mountains.

The Murian Empire and Other Antagonists

The Heavy for most of the second game. He fancies himself a director, always referring to his schemes as "scripts", and tends to get a little carried away with them. He serves Vega in the games, while in the anime he works entirely for himself. His EM-partner is called Phantom, and they fuse together to form Dark Phantom.

He appears again in the third game and attempts to steal Mega Man's Noise Control Program. Not only does he ultimately fail, his final battle with Mega Man ends in a worldview-shattering defeat. He is last seen falling into the void of a computer system, though Geo and Omega speculate they will encounter him again some day. 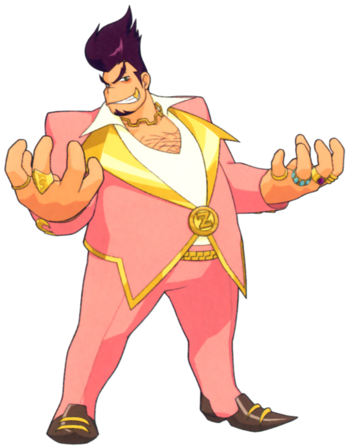 A gorilla of a man whose approach to life is simple: consolidate as much wealth as possible. In the second game, he's a minor antagonist who is given his UMA by Hyde, which enables him to harass a local hotel he wanted to buy by driving down the property value. In the anime, he's been bumped up to Hyde's equal and opposite, a fellow competitor for the OOPArts and the riches they may earn him.

Partner: Plesio (Brachio)
EM Human: Plesio Surf (Brachio Wave)
"Ladies and gentlemen! Prepare yourselves! You're about to see footage that has to be seen to be believed!"

The star of the Netopian TV show World Mysteries who travels the world solving mysteries. His travels take him to Mess Village, where he tries to find proof of the legendary creature Messie. He takes an interest in Zack, who was the first to sight Messie. Later turns out he had been faking Messie sightings to boost his ratings. Hyde gives him the ability to Wave Change into Plesio Surf and he attempts to drown Mess Village, though he is defeated by Mega Man.

In the anime, his role is inverted. He travels to Mess Village in an attempt to disprove the legend of Messie. However, he ends up possessed by Plesio, who uses him to scare the humans away from the lake to get some peace and quiet.

The leader of the village in the mountains of Nanzca, the shaman is determined to lead his people into prosperity, by hook or by crook. So, when Bud falls smack dab in his lap, he seizes the opportunity to use him as "a visiting Emissary from the mythical land of Mu" to unify his people, which plan Geo and company take issue with. The plot thickens when (1) Hyde arrives to present him with the UMA Condor to take another swipe at Mega Man and (2) Solo arrives to murder the false emissary.

He also appears in the anime, but this time as a benevolent figure in the village, simply overseeing the day-to-day life of his tribe. He accidentally triggers the awakening of Condor, who possesses him and decides that he would be best served by the worship of human kind.

"You should think twice before approaching Lady Vega."

Vega's heavily robed chief henchman. Found mostly either at her side or delivering her dispatches to Hyde and Solo. Underneath the robe is the glowing image of Vega's war-slain lover, Altair (Hiko in Japan), whom she tried to recreate with the technology of Mu, pioneering Matter Wave technology along the way. She failed, but refuses to admit this to herself, repeatedly asking him if he remembers anything before finally recognizing him as unique... as he dies. 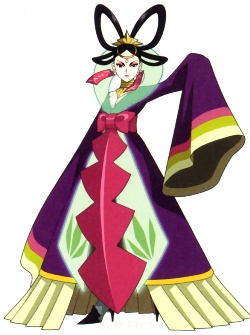 "[Earth] needs a ruler. A ruler who wields absolute power."

Vega is a brillaint scientist that pioneered Matter Wave technology. She is also the Big Bad of the second game, with designs on the powers of the dormant Le Mu. The Matter Waves she's credited for were actually the commercial fallout from her attempts to resurrect Altair, her deceased lover. Altair's death also spawned a hatred of the sense of entitlement she found in otherwise worthless people, and so she vows to create a world in which only those she deems worthy may live.

Doctor Orihime's appearance in the Tribe anime as the Big Good is handled above. 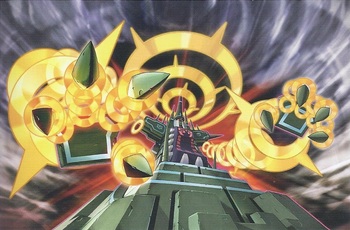 "Their search led them to Earth's End. And there they found the Great Being, the source of all EM waves.The Great Being first gave the Mu language."
The God of EM Waves and the ruler of the Mu continent, also referred to as The Great Being. After the destruction of the Mu civilization, Le Mu fell into a deep slumber and both he and the continent mysteriously vanished. Lady Vega and her cohorts seek to use its powere to create and rule over a world filled with people she deems worthy.

In the anime, his backstory is slightly altered. Le Mu was sealed away by the inhabitants of the Mu civilization, but many had lost their lives, leaving Rouge as the sole survivor. Rouge seeks to stop Vega from reviving him.

Apollo Flame's right-hand man and the leader of the IFs in the Alternate Future.

"I see that you do not understand how the galaxy works! You'll just have to see it with your own eyes!"

A very powerful EM being born of Le Mu who rules the Alternate Future, a parallel world identical to Geo's own. After exterminating all life in the Alternate Future, Apollo rested to regain his strength while having his IFs search for more worlds to conquer. Dark Phantom IF tricked Mega Man into opening the door to his world, but Mega Man managed to defeat Apollo Flame.