"Worlds will collide. Destiny will be broken."
—Tagline

Diamond Phase is an idea for an Action RPG by Ironcommando. Part of the Metaspace series. Set on a hi-tech planet, Diamond Phase tells the story of the consequences that follow when a magical race is introduced to a hi-tech society. Later on, more mysteries about the races and even the planet itself are uncovered, eventually opening it up to a much bigger plot.

Terra 102 is a technologically advanced planet of the Galactic Federation, and is home to world President Rayfer and his daughter Calia. AC, a physically gifted child soldier from the Federation army has recently been promoted to a bodyguard of the President's daughter, in order to keep her safe. Little does he know that things aren't always as they seem, as he finds out about her, himself, as well as uncovering a war that could potentially destroy the universe...

Tropes present in this hypothetical game:

"Regular humans" of Terra 102. Aside from aging slower, being slightly stronger, and being much hardier, there's not much difference to them from a regular human.

A human-descended race that live on Terra 102. They have both psychic powers and photokinesis, but are blind and more fragile than humans. They can interbreed with Terrans, but the child will be sterile (unless the child is a Gifted).

Average looking Terrans/Solaris with a Meta implanted into them. This Meta will eventually take over the Terran, altering their mind and eventually destroying the physical body.
Advertisement:
World Tropes
Wildlife and Vegetation Tropes
General:

Not the sunflower that's found on Earth. These are flowers with strange organs- they photosynthesize much faster than most plants, absorbing light in the day and store it as energy in a specialized root. During the night, they let out the energy by causing their flowers to shine brightly.

Small creatures that scamper around eating grass at the bottom of the food chain. They also have venomous claws toxic enough to kill Terrans. Yes, even the rabbit-analogues will kill you! Even still, these are kept as pets as long as they're de-clawed and neutered.

Wolf-like lizards that travel in packs, can leap high, and they shred metal robots and forcefields to bits. Thankfully they're only active in the night. Shredders are similar, except bigger. These are the reason why the people don't colonize the ground below- these will kill them at night.

Insects that very quickly adapted to use the Mana given out by Gifted. Before their adaptation, they were known as Forest Skippers.

Pteranodon-like creatures that fly low and spit fireballs. Thankfully most of them don't fly to the city levels.

A giant subterranean worm with psionic Deflector Shields, extremely tough armor, extremely sharp teeth, extremely fast speed, and an extremely bad temper. The reason why the terrans don't dig down past the surface.

Cnidarians that live in the warmer seas of Terra 102. They have powerful shock organs and an ability to emanate an electrical pulse. One of the reasons why the Terrans don't send in machines to explore the oceans.
Faction Tropes

The planetary army of Terra 102, led by Planetary Commander Starwind. Capable of defending the planet from threats within and threats without. Their base of operations is a cluster of Space Stations orbiting the planet's Equator. They're part of the Galactic Federation.

A group of people developed after the populace learned the existence of Gifted. They want to destroy all the Gifted and magic from the world as they feel that the Gifted are a threat to humans and the tech society. Known as the Knights of Planetary Science to the citizens.

A group of Gifted who believe that it is their destiny to rule the planet and enslave the humans as soulfood. Turns out it's part of their nature passed down from their parents.
Storyline Tropes
Individual character tropes. Spoilers abound.

AC
The male protagonist of the story. AC is a young male who's assigned to be Calia's bodyguard. He mixes around with her as well as the other Gifted while he's not fighting terrorists alongside them.
Calia Rayfer and Chris 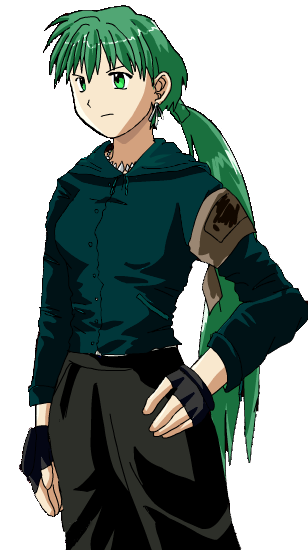 "This is my planet. You follow my rules here."

A young woman Gifted working as an officer of Terra 102's Gifted army division, and the female protagonist of the story. She joined the army to protect her planet from terrorists trying to incite strife between Humans and Gifted.

A crystalline eagle-ray like creature. She's actually the Guardian/Arcane half of Calia, and is usually absorbed inside her. Cal can also allow Chris to absorb her and transform into a larger, much stronger form of Chris, however, she doesn't have full control over it. 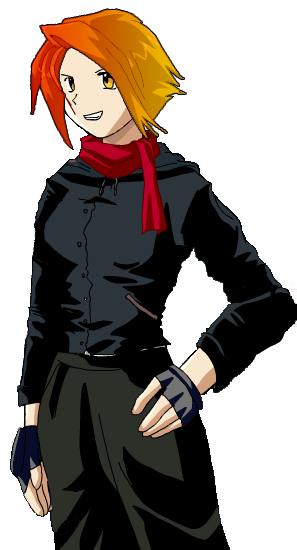 "You look ready for a fight. Let's do this!"

A young woman Gifted working as an officer of Terra 102's Gifted army division. She's the child of Planetary Commander Starwind and is trained to fight since young and is very experienced at combat.

A swirling mass of flame that likes taking on the form of a flaming bird. She's the Guardian/Arcane half of Amber, and is usually absorbed inside her. Amber can also allow Firewhirl to absorb her and transform into a larger, much stronger form of Firewhirl, however, she also doesn't have full control over it.
Melanie Irving and Abyss 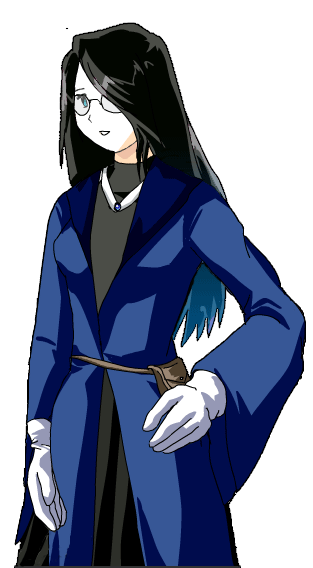 A young woman Gifted working whose recently deceased father was the head of Terra 102's infrastructure. She seems to live alone in her house, but it seems that she isn't really alone. She eventually signs on an officer of Terra 102's Gifted army division. Generally a nice person, but it's not advisable to push her too much lest she snap...

A shifting mass of dark liquid. She's actually the Guardian/Arcane half of Melanie , and is usually absorbed inside her.
Rae Solaris and Corona 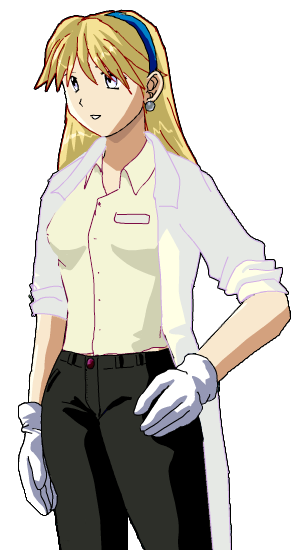 Hi there! I'd love to be your friend! =D
Daughter of the head of Terra 102's technology and innovation. Being a Solaris she has natural Psychic Powers, but is blind although she can "see" via sensing light. Her Gifted powers only enhance them even more.

A large ball of electricity and light. She's actually the Guardian of Rae, and is usually absorbed inside her. Rae can also allow Corona to absorb her and transform into a larger, much stronger form of Corona, however, she doesn't have full control over it.
Kaiden Masterson and Nocturnal 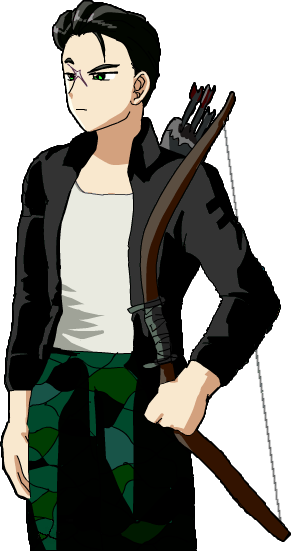 A Gifted officer in Terra 102's army and a close colleague of Amber. He has powers that allow him to analyze both entities and situations, allowing him to find the nature and purpose of anything, as well as slight Combat Clairvoyance.

Kaiden's Guardian, an owl-like being. He'd functions in battle by striking at enemies with aerial attacks, as well as surveying an area and getting information.
Soldier B

A human soldier in the Planetary Army. He uses a flag with a spearhead as his weapon.

President Maximilian Rayfer
The world president of one of the planets governed by the Universal Federation. Very protective of his daughter Calia, he is reluctant to let her take on a dangerous job, but goes on with it in the end (it helps that she's immortal).
Planetary Commander Starwind

"You want to invade us? Then you'll have to go through me."

The military system on Terra 102 is different- there's one huge planetary army, each of which have their own divisions with their own officers. This is the guy in charge of all of them.
CEO of Infrastructure Irving

"Daughter, let me handle this. You may not see me again, but I will always be with you..."

The guy in charge of the planet's city infrastructure. He knows the truth about Melanie's mother and his daughter, and will do his best to protect them.
CEO of Research and IT Raina Solaris
"You are the shining Ray of hope for Terra's scientific advancement"
Gifted Instructor Serion Meis

A male Gifted with the ability based around power manipulation. He acts as a trainer for Gifted to hone their powers, and usually does not fight otherwise.
Tim Smith and Ul Ateblack

"The world is my forge"

"As long as it can happen, I can make it happen."
Theme: The Black Case

Calia's childhood friend. When they were both children, they had a crush on each other, and they did their First Kiss. Little did they know that one kiss would seal their love life together.

A hollow armor-like being who is actually the Guardian of Felix, and is usually absorbed inside him. Felix can summon Destin onto himself as a armor of sorts, greatly increasing his physical capabilities.
Sara
A cute little girl Gifted that the AC and Calia save from the Xenobreakers. She then becomes friends with them. She has two Gifted parents and a sister, and is one of the first children of such a union.

An imposing male member of the Xenobreakers. He used to bully AC when both of them were kids. He loves his big guns and mechs.
(Xenobreakers' Dark Chick, codenamed AM-FEAR)
The Xenobreakers' interrogator. A lady in a Powered Armor with a sadistic streak of using Electric Torture on Gifted to squeeze information out of them, before killing them.
Xilus the Inquisitor
The Xenobreakers' Mysterious Employer. He's actually a Meta tasked to remove Arcanes and their Gifted "spawn".

Dr Alter
Felix's dad. After working with the Gifted Children and finding out about their secrets, he kidnaps Calia, Amber, Melanie and Rae along with a group of Terran children for experimentation.

"My child... let me show you your true destiny"

Calia's mother, who took on human form to marry President Rayfer before leaving him. She can manipulate solids just like her daughter.*
Aestus
" Husband, is that you?"Amber's mother. She can manipulate gas and flame. She met up with Planetary Commander Starwind when he saved her from an arctic tundra. The next day, she came to Starwind and offered to marry him and bear his child as thanks and also as part of her plan.
Aphotis

"Child, let me tell you our story and teach you what you are..."

Melanie's mother. She can manipulate liquids and darkness. Unlike the other Arcane beings, she decided to stay on Terra 102 as she didn't agree with their beliefs.
Arcus

"Don't listen to your mother anymore. Let me guide you, Rae"

Rae's father. He can manipulate the electromagnetic spectrum. Unlike her mother, he is very nice and caring... enough to let Rae pull a Face-Heel Turn and join the Arcane beings.
Aeternus
The mother of Adamas, Aestus, Aphotis and Arcus. She plans to seed worlds with Gifted so that the Gifted will take over, and eventually shed their mortal coil and turn into more Arcane beings.

Stormer: "Hey, you're that woman we saw at that battle! You're the President's Daughter, right?"
Chiharu: "I wouldn't have expected to see you down in a place like this. It's too dangerous here for someone like you."

A pair of the game's bonus bosses, fought at the end of The Altered Realm. They are Stormer's primary OC's and serve as the POV characters of their series, Unchained Lightning. This only covers tropes unique to their appearance in this game. For more tropes related to these characters, please see their dedicated tropes page Here.
?????

The supposed Domain leader of the Domain of Anti-Logic, a place where everything runs on Insane Troll Logic and can only be defeated by such. He's also related to ??? and is implied to be a similar being.