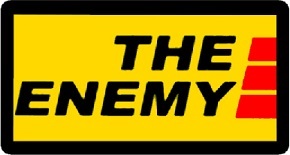 ...yup, this is one of those cases.
In the ''A Real American Hero" universe and it's spin-offs the term "Cobra" is meant to refer to every organization G. I. Joe has to face. Hence, the "Ruthless terrorist organization determined to rule the world" is a conglomerate of several factions consisting in legitimate corporations, military contractors and allies alike.
Advertisement:
open/close all folders
Cobra Commander

"The GI JOE team has no chance against us. What do they stand for... fairness... honor? Euphemisms for weakness!"
Click here to see his battle helmet 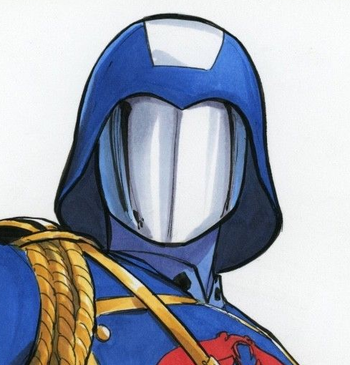 The Big Bad of the franchise. Sometimes a scion from some bizarre ancient civilization, a used car salesman who lost everything and became insane, a renegade European ex-soldier/scientist, "Adam DeCobray" or the Baroness' younger brother. Whatever the case, Cobra Commander lusts for world domination above all else. He is hatred and terror personified (...except in the 80s cartoon), and really hates G.I. Joe.

"I must admit I'm impressed by your will to live, but it's a losing battle!"
Cobra High Command

COOOOOBRAAAAA!!!
Lurking under the facade of a legitimate corporation called "Arb.Co.", Cobra is an outlaw syndicate seeking to garner power through subterfuge, terrorism, and extortion; Cobra serves as the Arch-Enemy of the G.I. Joe team.

The Cobra Emperor, created by Dr. Mindbender combining the DNA of history's greatest generals. In the TV series, he was created explicitly to overthrow Cobra Commander, while the comic version's creation was mandated by Cobra Commander himself as a general, but Serpentor arranged the deaths of Cobra Commander and Destro (they got better) to take command.

"What are you staring at? We are not animals! We do not go mewling home at the site of first blood."
"How can the troops respect me if I don't share their danger?"
"For I am Serpentor! AND THIS, I COMMAND!"

Tomax and Xamot were former circus acrobats, diamond smugglers in some continuities and plainly members of "The Corsican Brotherhood" mafia in others. Now these twins are in charge of all Cobra's finances and of his personal "Praetorian Guard", The Crimson Guardsmen.

"...all games end today!"
Voiced By: Keone Young (G.I. Joe: A Real American Hero, Sunbow series), Scott McNeil (G.I. Joe: A Real American Hero, DiC series), Ty Olsson (Reel FX films), Tom Wayland (G.I. Joe: Sigma 6), Eric Bauza (G.I. Joe: Resolute), Andrew Kishino (G.I. Joe: Renegades), Sean Crisden (G.I. Joe: Operation Blackout)
Portrayed By: Byung-hun Lee (G. I. Joe: Rise Of Cobra and G. I. Joe: Retaliation), Andrew Koji (Snake Eyes: G.I. Joe Origins)
Master of the Arashikage ninja clan, trained under his uncles Hard Master and Soft Master. During his training, he was Snake-Eyes' Sword Brother. After a Cobra agent killed Hard Master framing Storm Shadow in the process, his own clan disowned him so he joined Cobra as Cobra Commander's personal bodyguard under the Commander's promise of telling him someday the identity of the real murderer.
Hard Master: "...this, you can already do... and it is a terrible thing! The seventh step is death! Passing that knowledge to anyone... even my own blood is a huge and treacherous step."

A former ASIS note Australian Secret Intelligence Service - the Australian equivalent of the British SAS operative who became a mercenary after he was discharged. Wanted for numerous war crimes, he joins Cobra in exchange for sanctuary.

One of the top experts in explosives around the world. Sometimes Cobra contracts him for sabotage missions.

A former dentist who tried to find a way to stop dental pain via brainwave manipulation. When he tested his idea on himself, the alteration caused to his mind made him become a madman. He soon became Cobra's main scientist after the death of his predecessor Dr. Venom, given his proficiencies with brainwashing and genetics.

"Bring me the toughest contender G.I. JOE has to offer - I'll show them what real fighting is!"
Cobra combat trainer. He wears boxing gloves and has a punching bag with the word "Joe" written on it.

"I've got nothing against my brother at all-even if he did have an unfair advantage and probably cheated to get on the G. I. JOE team. I forgive him. Really."
Barrell Roll and Bombstrike's brother. Blackout washed out of the G.I. Joe team, and subsequently joined Cobra, becoming a sniper for The Plague. 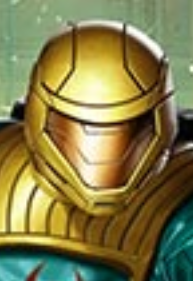 "Manufacturers pay me to haul the stuff away and dispose of it, I make it worse and sell the stuff as a weapon. Not only is it legal; I get a tax abatement for it."
Voiced By: Terry Klassen (G.I. Joe: A Real American Hero, DiC series)

Driver of the Water Moccasin boat. He would later become the De Facto leader of the Python Patrol.

Gung-Ho: "Sure. I know the type. They're all around the Gulf Coast. Trash. Drifters. They can drive a swamp buggy like the devil himself, rebuild a V-8 with a coat hanger and spit, fight all night and raise cain 'til the cock crows. They got a heart fulla gimme and a mouth full o' much obliged."

The Up to Eleven successor of the original. 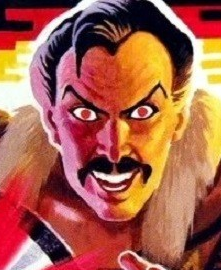 A creepy, mystic advisor to the leaders of Cobra who claims to have psychic powers.

"Man or woman, ninja or neophyte, my Flying Dragon will be your demise!"
Voiced by: Scott McNeil (G.I. Joe: A Real American Hero, DiC series)

A former Night-Creeper expelled for his utmost brutality and lack of finesse, now working for Cobra as muscle-for-hire.

"Of course I could simply hurt them until they talk, but it's too much more amusing to twist their minds until all they want to do is tell me every single secret they know."

A psychological warfare expert with a mysterious past, the Interrogator is a frequent member of the Plague, the Cobra equivalent of a black-ops commando team.

The mysterious leader of the "Night Creepers", a syndicate of mercenary hi-tech ninjas employed by Cobra at times.

"Of course I have feelings. They may be enhanced digitally... but they're still feelings."
Voiced by: Dale Wilson (G.I. Joe: A Real American Hero, DiC series), Colin Murdock (Valor vs. Venom), Maddie Blaustein (G.I. Joe: Sigma 6)

"Victory goes to the leader with the most indispensable warriors."

A former Cobra officer who seeks to take over Cobra... and its expanded treasury. He has built a power base among troops who are dissatisfied with Cobra's senior leadership. 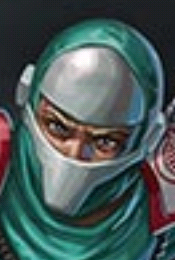 Captain of the Medi-Viper Corps.

"So... the mighty Destro thinks he's gonna fix my wagon, huh? Well, I got something for him!"

A Cobra officer who acts as a Courier. 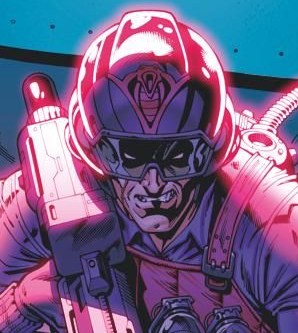 "I fear no mortal man in face-to-face combat, but my sword cuts easiest from behind."
Voiced by: Don Brown (G.I. Joe: A Real American Hero, DiC series), Kevan Ohtsji (Valor vs. Venom)

A "brutally efficient" renegade member of the Arashikage ninja clan, under contract for Cobra on a regular basis. 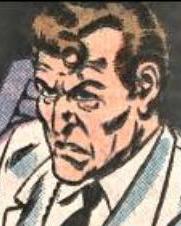 "Cross my path and I'll poison your body and your mind."

Cobra's original science officer, and creator of the Brainwave Scanner.

"She looks small and slight, but she drives like she's in a monster truck show."

Driver of the Rattler 4-WD jeep and intelligence courier.

"There's just no place where you can run or hide when I'm flying above you."
Voiced By: Pat Fraley (G.I. Joe: A Real American Hero, Sunbow series), Trevor Devall (Valor vs. Venom)

A ground support pilot who has developed a Red Baron like reputation within the Cobra ranks. Though he can fly any of Cobra's fighters, he generally favors the Rattler VTOL Tanksmasher.

Wild Weasel: The easiest way to navigate at this altitude is to follow the highways. This way, I can get my maps at gas stations-
Baroness: Look where you're going! The overpass!
Wild Weasel: I don't have to look where I'm going.
Iron Grenadiers

"...making the world a better place to strife!"
The armed wing of what is rightfully known as "M.A.R.S." (Military Armaments Research Society). A corporate that started as an illegal arms sales ring and dates back to the English Civil War. 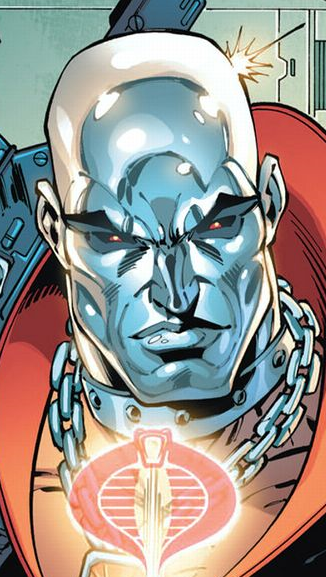 The current CEO of the Military Armaments Research Syndicate and the latest in a long line of weapon dealers — his main client is Cobra. He wears his title and metal mask as a family tradition.

"I cannot shake the feeling that I may have just sold out the human race."
"Militarily speaking, it is only fair to say that Cobra Commander is a world class... BUFFOON!"

"Completely unhindered by ideology or ethics, Darklon is motivated purely by greed. His telephone solicitors have been known to drum up business for his mercenary army by offering 'reasonable hourly rates' and cash rebates!"

A distant cousin of Destro, Darklon is an eccentric warlord who has carved up his own fiefdom in the Carpathian mountains. He frequently provides asylum for Cobra, in exchange for them helping him stamp out the Resistance groups that occasionally challenge him.

The Iron Grenadiers' anti-tank expert. He invented a backpack mounted anti-armor system, then gave it to M.A.R.S. with only one condition; that he be given the first production model to use in battle. 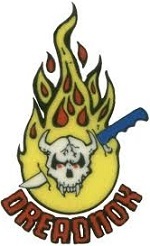 "Rock Hard, Raid Free!"
Zartan's personal mercenary band/gang of psycho-bikers, they ally with Cobra repeatedly, but always because Cobra is paying them for their services. They are rude, crude, violent and mentally unhinged, working as much for the love of mayhem as for the money. Their numbers change and swell depending on the continuity. For example, in the 80s cartoon, only Buzzer, Torch and Ripper appeared in the first season, with the second season adding newcomers Monkeywrench and Thrasher, and Zartan's siblings Zandar and Zarana. Series two added Gnawgahyde and Road Pig to the group. The comics and toyline, meanwhile, included all of the aforementioned and more, including Zartan's daughter Zanya, Burn Out, Chop Shop, Crusher, Death Metal, Demolisher, the Dreadheads, Heartwrencher, Machete, Rugrat, Storm Rider and Zanzibar. 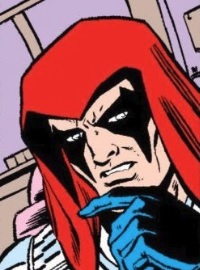 A master of disguises who can even change his skin color to blend with his environment. He leads a biker gang called the Dreadnoks. He's the Hard Master's real killer. 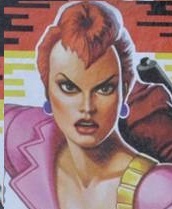 Zartan's sister and de-facto second-in-command of the gang. 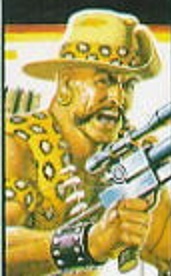 "...he greases himself in rancid hog-fat and eats only what he can trap and shoot in the wild so that the chemical additives of processed food won't alter his body chemistry and scare off his game with too human a scent."
Voiced By: Ian James Corlett (G.I. Joe: A Real American Hero, DiC series)

A nasty and evil person who chose the path of the poacher to make his living. 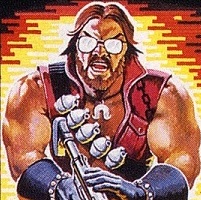 "I like to add a bit o' fireworks to my explosives, ya' know? Sparkles, roman candles and stuff. Gives it a personal touch and adds a bit o' colour for onlookers."
Voiced By: Neil Ross (G.I. Joe: A Real American Hero, Sunbow series)

Former employ of several terrorist factions, his expertise manufacturing bombs gave him a place amongst this biker gang's ranks.

"What did you expect, sportsmanship?"

An absolute anti-social. One of the three original Dreadnoks.

The hulking main muscle of the Dreadnoks, and surprisingly, also his most intelligent member.

The last but not the least original member of the Dreadnoks.

The Belgian creator and driver of the Dreadnoks BFG, The Thunder Machine.

A former globe-trotting rouge, now flying the Dreadnoks' own Swampfire and sailing on their Air-Skiff.