A rogue militia with mysterious motives, the Red Shadows have become a serious threat due to their mixture of fanatically devoted troops, powerful sophisticated weaponry, and mastery of unique cutting edge technologies. 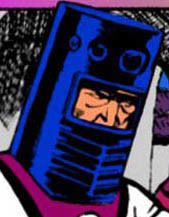 Founder of the Red Shadows and enemy of Action Force. In the Battle Action Force continuity, he betrays his own organization and eventually becomes Cobra Commander. A different version appeared in Hasbro Comic Universe as an enemy of the Revolutionaries, eventually leading an effort to wipe out the Cybertronian race in First Strike. 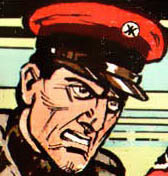 "Wipe out the Americans! Raise the Black Flag. No quarter, and no prisoners!"
The Red Shadows primary field commander and tactician. Originally a Royal Marine attached to the Special Boat Service, Major Shepherd was kidnapped by Baron Ironblood and brainwashed into a dedicated and ruthless follower.

A technology major from Tokyo University who was corrupted by dreams of power shown to him by Baron Ironblood, Red Laser serves as the Artillery expert for the Red Shadows. 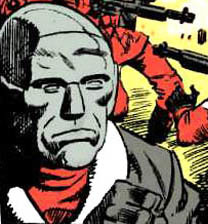 A Latvian defector who eventually joined Z-Force. During an engagement with the Red Shadows, Nobokov received life-threatening injuries and was presumed killed. Baron Ironblood recovered Nobokov's broken body and had him converted into his cybernetic enforcer, Red Jackal.

Leader of the Red Shadows in the DDP comics. His purpose is to finish the established government he sees as corrupt.

A ruthless female member of the Red Shadows.

A feared enforcer and assassin.