The primary cast of the various Kirby games, including Kirby and his closest companions

open/close all folders
Advertisement:
The Main Cast in General 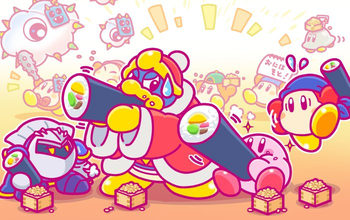 The main characters of the series. Kirby is our plucky hero, while the roles of his friends vary greatly from game to game. Generally speaking, however, these are the guys who are trying to save the day. 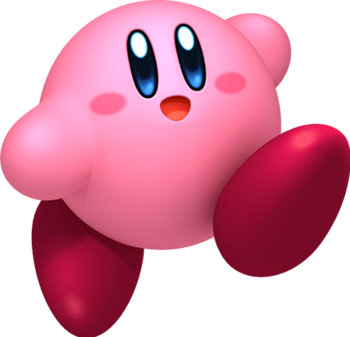 The Pink Demon. The Super Tuff Pink Puff. The Star Warrior of Infinite Power. The pint-sized puffball who literally eats danger for breakfast, and becomes anything the situation calls for. The judge, jury and executioner of Eldritch Abominations everywhere, and the Sole Survivor of Galeem's assault.

Kirby is a young, pink alien from the Planet Popstar. Cheerful and carefree, he lives by his basic instincts, eating whenever he is hungry and sleeping as soon as he gets tired. However this childlike nature hides surprising strength and bravery that shows itself whenever his home is threatened. With a stretchy mouth and vacuum breath, he can consume anything including his enemies and he can absorb the abilities of certain things he has eaten. 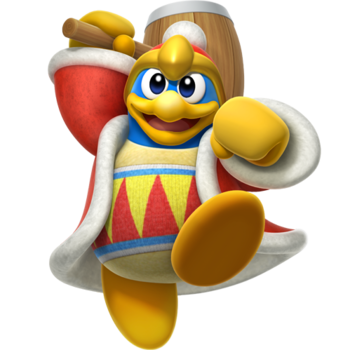 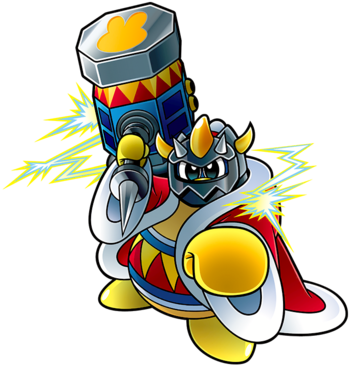 Hammer-wielding penguin (possibly) and self-proclaimed ruler of Dream Land, though he never really does anything related to administration. Usually ends up as the villain through Greed or Demonic Possession. 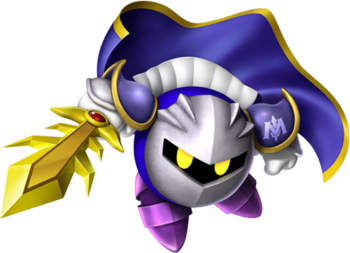 "My one wish is to become stronger. So I wish to fight... the greatest warrior in the galaxy!"

A masked swordsman that travels Dream Land searching for worthy opponents to hone his strength. He follows his own personal code of honor, a rarity among the residents of Dream Land, and commands his own army from his flying battleship the Halberd. His cape can transform into bat wings allowing him to fly, and he wields the legendary blade Galaxia with incredible skill and speed. While his morality is highly ambiguous, he generally seems to be an Anti-Hero, and while he resembles Kirby without the mask, his exact relationship with Kirby remains a mystery. 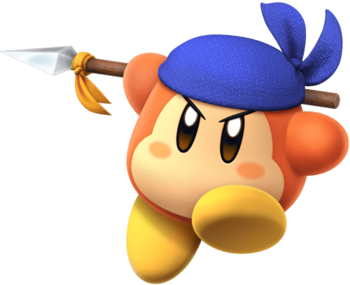 A seemingly high-ranking Waddle Dee in King Dedede's army. Distinguished by his blue bandana, which sets him apart from other Waddle Dees. He often acts as King Dedede's sidekick, despite also helping out Kirby from time to time. While initially a minor antagonist, later games feature him as one of Kirby's best friends, as well as being much stronger.