Introduced in Beyond Castle Wolfenstein

Introduced in Wolfenstein 3D and Spear of Destiny

The bullies in brown go down easy but there's a lot of 'em.
—From the Wolfenstein 3D manual.

These are the most common enemies that BJ will encounter. They're rather slow on the draw and can't take much before dying.
Killer Dogs

These German shepherds go right for your throat.
—From the Wolfenstein 3D manual.

Attack dogs that guard installations. They're barely a threat, even without ammo, as each attack dog is a One-Hit-Point Wonder.
SS Soldiers

Members of the Schutzstaffel, they wear blue uniforms, bulletproof vests, and sadistic grins.
—From the Wolfenstein 3D manual.

Elite mooks with much better protection than most guards, and who carry automatic weaponry. Up close, one isn't much on his own due to your ability to stun them with your guns or even your knife, but watch out when they've got backup to distract you while they aim and fire their weaponry, or if you're caught out in the open at a far distance.
Advertisement:
Mutant

Hideous human experiments of the evil Dr. Schabbs, these three-armed beasties are killing machines.
—From the Wolfenstein 3D manual.

These experiments with reanimation were brought back to life with "corpsokinetic reanimation serum" and given third arms for their hand guns. They don't have an aiming state before they fire, making it a major hazard to be in their line of sight. They can be one of the most dangerous mooks in the game, but thankfully are rare with the exception of "Episode 2: Operation Eisenfaust" where they are noticably more frequent.
Officer

Quick and surprisingly durable Nazi Officers. Their quick speed can make them a serious threat due to their ability to quickly sneak up on a player in tight maze-like hallways.
Fake Hitler 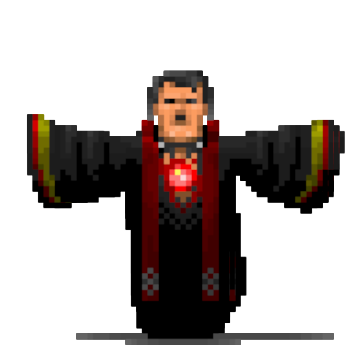 "Tod', Hund!"
Unique enemies * Some versions of Wolf-3D have these fakes on E3L10 too. found only in E3L9 where Hitler himself waits to fight BJ. These decoys are actually suspended by wires and have flamethrower-type weapons installed in their chests to intimidate intruders. 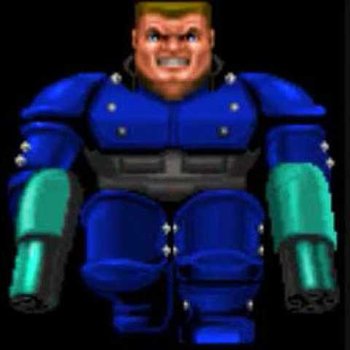 A large Nazi enforcer wearing a blue powered armor who is fought at the entrance of Wolfenstein castle. Later, in secret levels, B.J. encounters his "clones", other power-armored enforcers. He is the final boss of Episode 1, "Escape from Wolfenstein." 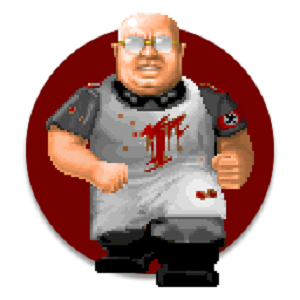 An evil Nazi scientist responsible for the creation of the mutants (undead, surgically-modified soldiers). He is the final boss of Episode 2, "Operation Eisenfaust." 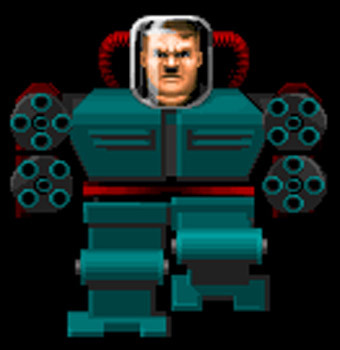 The Führer himself, and the final (at least, chronologically) boss of the original Wolfenstein 3D game. Encountered in the last level of the third episode, which is appropriately titled "Die, Führer, Die!". ID Software later released three more prequel episodes, so Hitler is not the last nor the hardest of bosses, but certainly the most memorable. He is protected by "Fake Hitlers", moving automatons equipped with flamethrowers. A Nazi officer and a scientist responsible for chemical warfare. He is the boss of the fourth episode (one of three "prequel episodes"), "A Dark Secret." 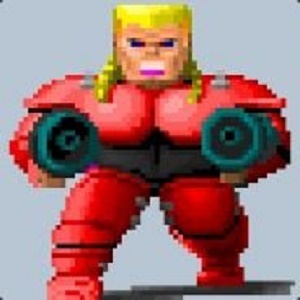 The sister of Hans Grosse, Gretel is a female Nazi enforcer, tasked with guarding chemical warfare plans. She appears similar to her brother, only wearing a pink powered armor. She's the boss of the fifth episode, "Trail of the Madman." 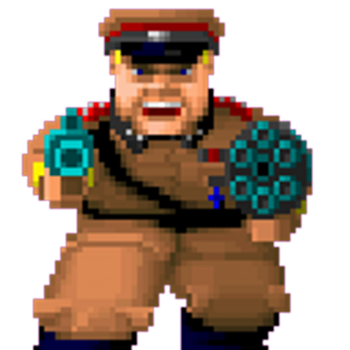 The final boss of the original Wolfenstein 3D (in episode six, after an update - originally, game had only three episodes with Hitler as final boss). The general plans to start chemical war and must be assassinated. You fight him at the end of the final episode, "Confrontation." 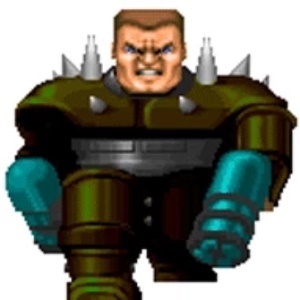 A large Nazi enforcer wearing a green armor and another member of the Grosse family, the oldest one of the siblings. He is the first boss of the Spear of Destiny stand-alone expansion. Since Spear of Destiny is the prequel, he is chronologically the first Nazi boss to die by B.J. hands. 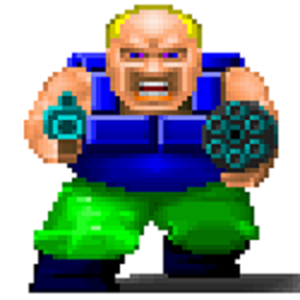 The second boss of Spear of Destiny, he is... a Nazi officer... or enforcer? Little is stated about him, besides his stage being called "Barnacle Will the Jailer". 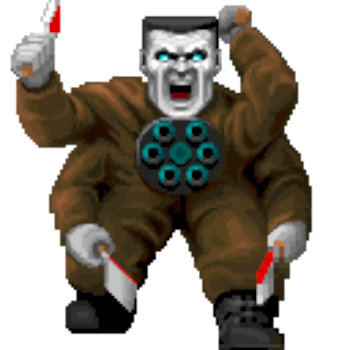 The Übermutant is Dr. Schabbs' ultimate creation. While basic mutants are undead people with rifles grafted into their stomachs, this monstrosity looks like large, four-armed man with a meat cleaver in each hand and with a minigun implanted into his chest. "Prove your worth, human!"

To end Spear of Destiny, you have to kill this infernal demon (or angel?) who trapped you in his nightmarish dimension filled with lost souls in order to test your might in combat.

A demonic warlord that makes a pact with Adolf Hitler, who seeks knowledge of all the secrets of war. He also sends the Devil Incarnate to protect the Spear of Destiny during the events of The Ultimate Challenge.

Introduced in Return to Castle Wolfenstein 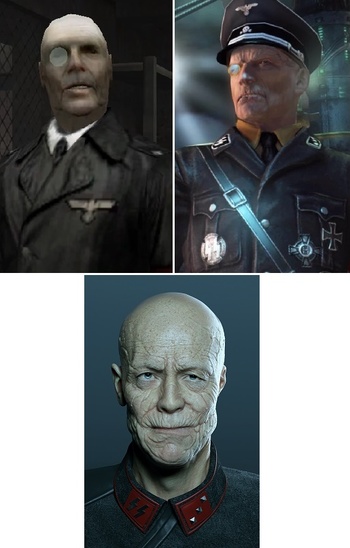 A Nazi scientist and SS-Oberst-Gruppenführer, catalogued as "the single most dangerous figure in the entire Third Reich". He's apt at getting away with all sorts of atrocities.

Deathshead's first line of experimentation in cyborg technology, the Lopers were a failure, but ultimately served as the basis for the Super-Soldier experiment. They consist of mutilated, oversized human upper torsos, with a Tesla generator unit replacing their legs. Fueled by a noxious cocktail of drugs, they are surprisingly fast and agile, but their uncontrollable savagery has caused them to be dismissed. 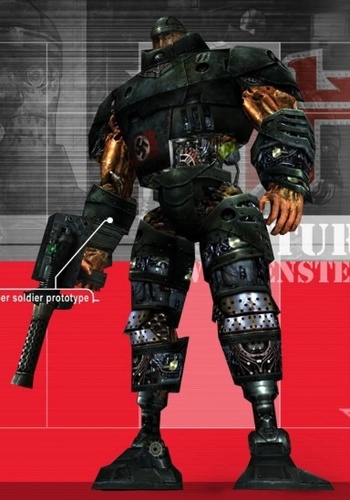 Deathshead's experiments in cybernetically-enhanced soldiers, an attempt to create elite troopers that would possess tank-like durability and firepower, but human mobility and speed. Proto-Soldiers (Protosoldats in German) were a success in that part, but they are incomplete and under-equipped compared to their fully perfected counterparts. 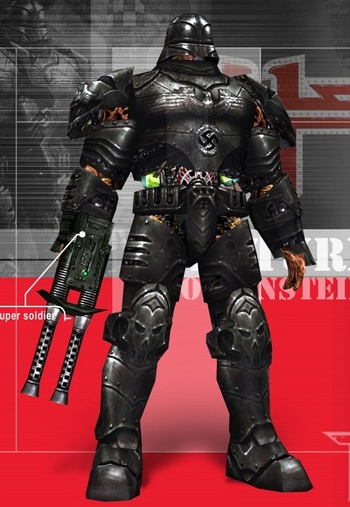 The Super-Soldier (Übersoldat in German) is the ultimate creation of Deathshead. Like its Proto-Soldier predecessors, it's a drugged up hulking cyborg, outfitted with heavy armor and experimental heavy weapons, turning it into a walking tank. Different iterations of the Super-Soldier have gone on to appear in different games. 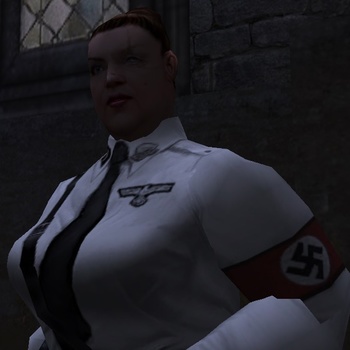 A high-ranking member of the SS Paranormal Division who's in charge of the garrison at Wulfburg. 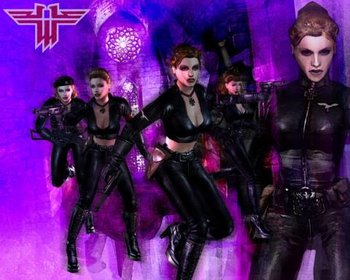 An all-female elite unit of the SS Paranormal Division, created and trained by Helga Von Bulow. 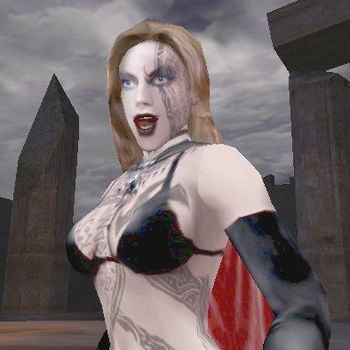 High Priestess SS-Oberführer Marianna Blavatsky is the woman in charge of Operation Resurrection. She tutored Oberführer Helga Von Bulow in the ways of the occult and oversees the awakening of Heinrich I. The Reichsführer-SS himself. He created the SS Paranormal division to use ancient occult and black magic secrets as weapons during the war.

Human corpses raised from the grave by the uncontrolled magic of the SS Paranormal Division, who blindly seek to kill everything that lives. 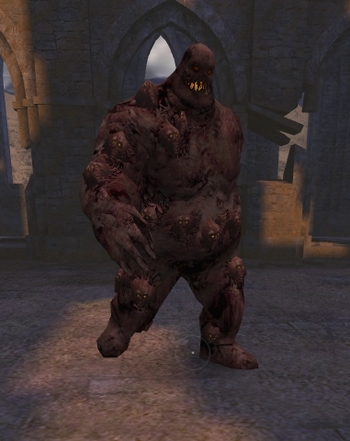 A leading figure in Thulian lore and the creator of the Dagger of Warding which possesses mystical powers. He was buried in a tomb next to a church in the village of Wulfburg and the dagger was placed on a pedestal in his mausoleum. Helga von Bulow accidentally releases him and gets dismembered alive for her troubles. He is the first boss of the game. 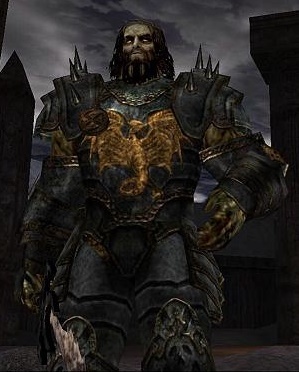 A warlord who launched a bloody campaign of conquest in Medieval Europe. He had studied the black arts and used them to his advantage by raising an army of undead warriors, the Dark Knights. In 943 AD, a benevolent wizard by the name of Simon the Wanderer confronted Heinrich, seeking to end his reign of terror. After a brief battle, the mystic realized he couldn't destroy Heinrich, so he instead magically sealed the tyrant in limbo.

A thousand years later, in 1943, the SS Paranormal Division seeks to awaken him...

Voiced in English by: Kyle Hebert (Wolfenstein 2009)
Voiced in Russian by: Vladimir Antonik

Voiced in English by: Jack Angel
Voiced in Russian by: Alexander Gruzdev

Introduced in Wolfenstein: The New Order 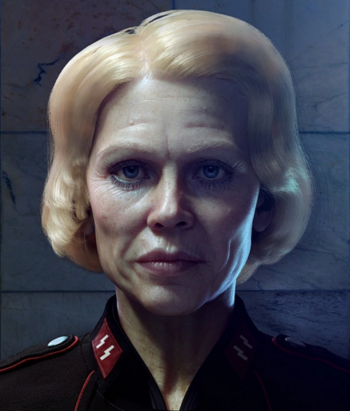 "For your crime... you will die like vermin. I will hunt you down. At the end of the earth, I will find you. Your skin charred, and your fats rendered. Your kind exterminated. In the end, I will feed your flesh... to the furnace." 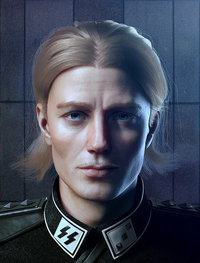 Introduced in Wolfenstein: The Old Blood 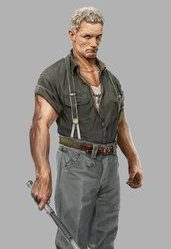 The corpses of various Nazis and civilians animated by the toxic reanimating gas leaking from a hidden vault below Wulfburg. They glow from within due to some side-effect of the chemical; the more ravaged by this internal flame they are, the faster they can move. They mostly attack in melee, but they can also spray bullets wildly at their enemies. 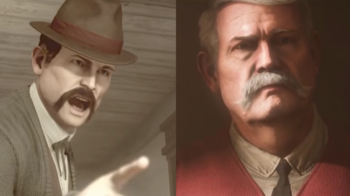 "When the Nazis took over, things got a lot better. You play by their rules, and you can do very well for yourself."

Voiced in English by: Glenn Morshower
Voiced in Latin American Spanish by: René García
Voiced in Japanese by: Kousuke Goto
Voiced in Russian by: Igor Abramovich 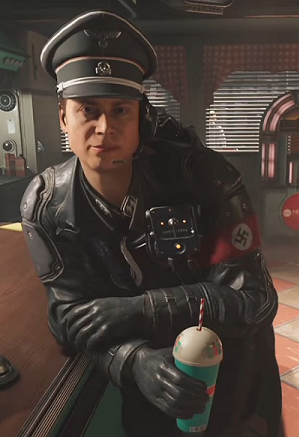 A Nazi Commander B.J. encounters in Roswell, whom just happens to be Failed a Spot Check personified. 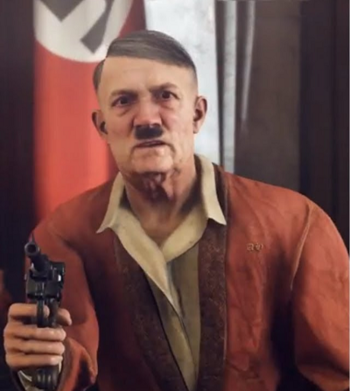 Yep, after spending most of The Old Blood and The New Order as The Ghost, Hitler's back, and he's gotten a little worse since we last saw him. He shows up in The New Colossus as the producer of a film that the Nazi High Command are making about "Terror-Billy", to celebrate their "killing" of him, and is just as insane and delusional as you would imagine an elderly Hitler to be.

Helene Winter
A film director based on Leni Riefenstahl. She's a fairly prominent film director in the Nazi-controlled world, making movies for the Nazi war machine such as America: The New Order. She also serves as Hitler's favorite film instructor, and reluctant caretaker.
Roderick Metze

Voiced in English by: Dwight Schultz
Voiced in Russian by: Andrey Lysenko

Übercommandant Roderick Metze, born into an old Confederate family and the son of a preacher and Grand Dragon of the KKK, had already gained a reputation in his dentistry practice for being a sadistic bigot, but when the Nazis took over, he saw an opportunity to help reclaim America for his ancestors. Now the commander of Illinois, he devotes himself to overseeing gruesome eugenics experiments on captured former athletes. He was introduced in The Freedom Chronicles.

Lothar Brandt
The Nazi General that was formerly in command of the occupation of Paris before the events of the game. After attempting to launch a coup against the power structure in Berlin in order to start a Fourth Reich, he was deposed by the Nazi High Command and is presumed to be long dead. It turns out he's very much alive, having infiltrated the French Resistance along with his wife Julie a.k.a. Juju, in order to manipulate them into achieving his objectives for him.
Julie Brandt
A French aristocrat who sided with the Nazis at the beginning of World War 2, eventually marrying General Lothar Brandt after the end of the war. She turns out to be Juju, the leader of the French resistance.
General Winkler
The Nazi General sent by Berlin to replace the deposed General Lothar Brandt as the leader of the Paris occupation. He's the first target of the Blazkowicz Twins upon their arrival in Paris.