Here you can find all the characters from Servamp, as well as the tropes associated with them. Proceed with caution, out there be spoilers! 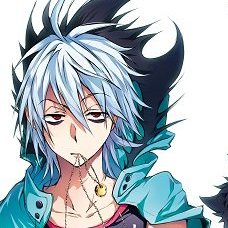 The stray cat Mahiru took in who turned out to be a very lazy vampire - the oldest and strongest of the Servamps, the Servamp of Sloth. He hates going outside or having to do anything at all (he'd rather spend his days napping or playing video games), but he will defend Mahiru at all costs.

The second Servamp, the Servamp of Pride. Hugh looks like a child in a vampire costume, but his manners and behavior show that he's much older and essentially a gentleman in a child's body (most of the time, anyway). He's always trying to appear as vampirelike as possible and is very happy to have found an Eve like Tetsu.

The third of the Servamps, the Servamp of Envy, Jeje is a loner who talks little but can get pretty violent when angered (usually by Mikuni). Little is known about him, even his face is a secret; he can transform into a snake and wields several guns during fights.

The fourth Servamp, the Servamp of Wrath. She always looks like she's about to kill someone, but surprisingly enough she's usually rather calm (which doesn't keep Lily from being terrified of her). Her current name and Eve have yet to be revealed. With her previous Eve dead, she offers Tsurugi to take her as a Servamp. Which unfortunately didn't work out. But she did find herself a new Eve, Izuna Nobel.

The fifth Servamp, the Servamp of Greed, he is known for picking celebrities as his Eves and killing them as soon as he gets tired of them. Cheerful and energetic in nature, he doesn't get along with his current Eve, Licht. Acting is his passion and he is very prone to quoting Shakespeare at every opportunity.

World End
World End/Ildio
Voiced by: Junichi Suwabe (Drama CD)
The sixth of the Servamps, the Servamp of Gluttony. Brash and hot-tempered as he is, he's still a decent guy on the inside who follows a strong code of who to hurt and not hurt. His name and Eve are still a mystery for the longest time until chapter 82 introduced his Eve and his name.

The youngest of the original Servamps, the Servamp of Lust. Lily has been serving the Alicein family for generations and is currently bound to Misono. He is friendly and charming and prone to stripping in public. Lily is a magic user who can create illusions and alter people's memories. 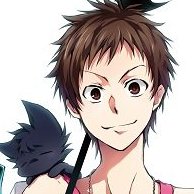 The Protagonist of the series, a boy in his first year of high school. He lost his mother many years ago and now lives with his uncle, who is rarely home because of work. Mahiru is a kind, pragmatic boy who likes simple things and dislikes complicated ones.

The first Eve Mahiru meets, Misono is a first year in high school and the Eve of the Servamp of Lust, Snow Lily. He is a rather proud, very intelligent boy who has trouble showing his real emotions. He has lots of vampire children, Lily's subclass, staying at his house.

Misono's older brother and Eve of the Servamp of Envy, Mikuni is an eccentric young man who likes to mess with people, especially Jeje. He is a mentor to Mahiru and affiliated with C3; sometimes it's hard to say whose side he's on.

A boy Mahiru met at a street festival and the Eve of the Servamp of Pride, Hugh. Or so it appears to be at first. Tetsu is a straightforward, simple-minded boy and absurdly strong. He sees the whole vampire business rather calmly and is never upset by anything. His family owns an onsen.

Eve of the Servamp of Greed, Licht is a young piano prodigy and already quite famous for his age. He likes to refer to himself as an angel and seems to be aloof at first, but he is a firm believer in hard work and the power of dreams. He and Lawless can't stand each other.

The only named female C3 member so far, Tinker is a friendly and slightly ditzy young woman who likes creating different gadgets. Aside from that, very little is known about her. She's the new Eve of Wrath.

Niccolo
Niccolo Carpediem
Voiced by: Kengo Kawanishi (Drama CD)
The previously unseen Eve of Gluttony who is The Don of the Carpediem mafia family.

Tsubaki and his Subclass

The main antagonist of the series. He is the eighth Servamp, the Servamp of Melancholy, who the original Servamps didn't know existed. For some reason or other he wants to start a war against his "older siblings"; he seems to have an ulterior motive but it has yet to be revealed.

Mahiru's best friend and classmate. Sakuya is known for being a joker, and he knows a lot of rumors about vampires in the area and likes to tell his friends about them with a scary face for maximum effect. In fact, Sakuya is a vampire himself and part of Tsubaki's team. He is torn between his loyalty towards Tsubaki and his friendship with Mahiru.

The first member of Tsubaki's team that Mahiru and Kuro run into, Berukia is a very hammy, over-the-top vampire. Most of the time he acts like either a stage magician or the host of a game show on TV.

The only female member of Tsubaki's team. Not much is known about her, but she is quiet and calm, as well as a capable fighter. She fights using puppets and she can even turn people into puppets or tie them up with her strings.

Tsubaki's loyal servant who acts as his butler and always calls him "Young Master." Little is known about him, except that according to Mahiru, he might be a foreigner.

Tsubaki's strongest subclass and essentially the ace up his sleeve when it comes to fighting. He calls himself an artist and occasionally speaks in haiku form.

One of Tsubaki's many weaker subclass, but extremely loyal to him and willing to do almost anything for his sake. He's shy and not very brave but trying his hardest.

The first member of C3 to be introduced as one, as well as the first one to approach Mahiru and the one trying to convince him to cooperate with them when they hold him and Kuro captive. He has very, very bad luck but is prepared for any mishap that may happen to him, no matter how unlikely.

The strongest fighter at C3, Tsurugi has quite the reputation among vampires for being a reckless and nigh-unbeatable vampire hunter. He's also fairly silly and easygoing and can be bought very easily. He and Mikuni used to be partners, but now they hate each other.

Nicknamed "Jun," Junichirou is Tsurugi and Yumikage's teammate and childhood friend and the most mature one of the three. He hasn't worked for several years as he was busy raising his son, who is now three years old.

Nicknamed "Yumi," Yumikage is the second strongest member of C3 after Tsurugi and his and Jun's teammate. He's short-tempered and grumpy most of the time, but he does care about his friends a lot.

Mahiru's uncle and the one who took him in after his mother's death. He's often away because of work, but Mahiru looks up to him a lot and aspires to become an adult like him one day.

Licht's manager, a friendly young man from France who's in charge of keeping an eye on the temperamental pianist. He knows about the existence of vampires and the nature of Licht and Lawless's contract.

Lawless's subclass and servant and someone who's been taking care of him for centuries. Currently he's traveling the world with Licht and Lawless, posing as the pianist's mascot while wearing a whale costume.

A princess and one of Lawless's former Eves who lived several centuries ago. Lawless loved her, but she ended up in an arranged marriage with an enemy kingdom to preserve the peace - something she failed at, and eventually she gave her own life to keep the peace. Lawless never got over her death or the fact that he failed to save her.

Mahiru's friends since elementary school at the very least. Koyuki is friendly and a bit of a worry-wart while Ryuusei is rather brash and a little hot-tempered. They remain happily oblivious to their friend's involvement in the war of the Servamps.

Misono and Mikuni's father and current head of the Alicein family, Mikado is rarely at home because of work. He's hiding the fact that Misono and Mikuni are half-brothers from his younger son for fear of making him feel guilty about the catastrophe his birth caused.

Two of Lily's subclass kids living at Misono's, Julie and Marie are twins, as well as the ones to pick up Mahiru to first meet Misono. They work as messengers several more times, often of their own accord.

Mikado's secretary, a young woman in her twenties. She was rescued by Lily as a kid and was one of the children who didn't have to be turned into subclass and grow up normally.

An acquaintance of Mikuni's, an eccentric scientist who researches vampires, especially the Servamps.

The mysterious creator of the Servamps. Their identity remains unknown.