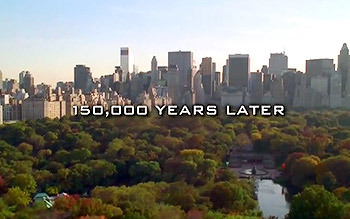 "August 29, 1997, came and went. Nothing much happened. Michael Jackson turned 40. There was no Judgment Day. People went to work as they always do. Laughed, complained, watched TV, made love. I wanted to run through the street yelling to grab them all and say, 'Every day from this day on is a gift. Use it well.' Instead, I got drunk. That was 30 years ago. But the dark future which never came still exists for me. And it always will, like the traces of a dream. John fights the way differently than it was foretold. Here, on the battlefield of the Senate his weapons are common sense and hope."
— Sarah Connor, Terminator 2: Judgment Day
Advertisement:

A series finale or epilogue where we're shown what happens to the characters, places and/or the setting. Usually takes place many years after the proper ending of the plot. Intervening events may be depicted via Flash Back.

If the series gets a sequel that picks up after the finale, it becomes a Time Skip.

Differs from "Where Are They Now?" Epilogue in that it's a full scene that shows interaction between characters and most likely dialogue. See also Deadly Distant Finale (when the Distant Finale shows how the entire cast dies), Fast Forward to Reunion (when a Distant Finale is used to reunite characters who separated at the end of a series) and Distant Sequel (when a work with a Distant Finale recieves a sequel). Might suffer from Modern Stasis. If the distance is long enough, you can expect Babies Ever After. Contrast (of course) Distant Prologue.

This is an Ending Trope. As such, it contains massive spoilers.