Characters / League Of Legends A

This page contains all champions beginning with the letter A. 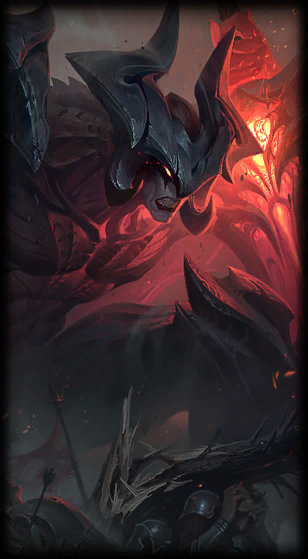 "Now, hear the silence of annihilation!"

“I must destroy even hope…”

Once honored defenders of Shurima against the Void, Aatrox and his brethren would eventually become an even greater threat to Runeterra, and were defeated only by cunning mortal sorcery. But after centuries of imprisonment, Aatrox was the first to find freedom once more, corrupting and transforming those foolish enough to try and wield the magical weapon that contained his essence. Now, with stolen flesh, he walks Runeterra in a brutal approximation of his previous form, seeking an apocalyptic and long overdue vengeance.

Aatrox is a Juggernaut champion who relies on his strong self-sustain to keep him alive in the middle of the fray as he ruthlessly butchers one enemy after another.

In season 1 of Teamfight Tactics, Aatrox is a tier 3 Demon Blademaster. His ability, The Darkin Blade, has him slam his sword into the ground, dealing damage to all enemies in a circle-shaped area. In season 2 his skin was changed to Justicar Aatrox, but he otherwise remained mostly unchanged apart from his origin changing to Light and his ability being renamed The Arclight Blade.
Ahri, the Nine-Tailed Fox 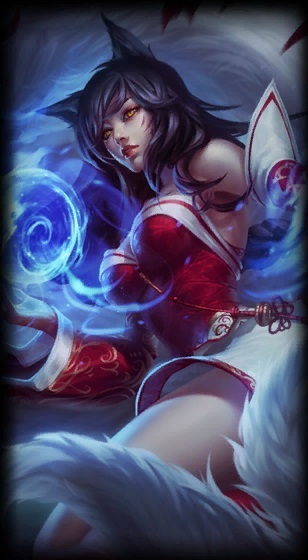 Don't you trust me?

"Human emotions can be even more volatile than the deepest magic.”

Innately connected to the latent power of Runeterra, Ahri is a vastaya who can reshape magic into orbs of raw energy. She revels in toying with her prey by manipulating their emotions before devouring their life essence. Despite her predatory nature, Ahri retains a sense of empathy as she receives flashes of memory from each soul she consumes.

Ahri is a Burst Mage champion who uses her high mobility to dance around her opponents, drawing out key targets and diving in for the kill before retreating back to safety.

In season 1 of Teamfight Tactics, Ahri is a Tier 2 Wild Sorcerer. Her ability, Orb of Deception, fires her orb in a straight line and calls it back, damaging enemies on both passes. She was removed in season 2. She returns in season 3 largely the same, except with Wild replaced by Star Guardian.
Akali, the Rogue Assassin 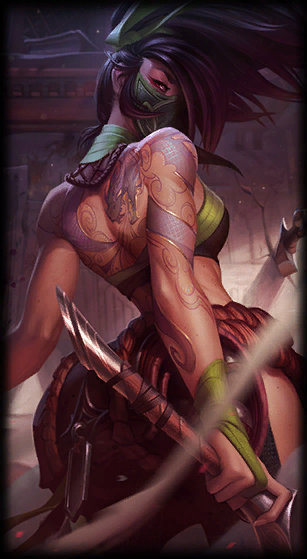 "Fear the assassin with no master."

"If you look dangerous, you better be dangerous."

Abandoning the Kinkou Order and her title of the Fist of Shadow, Akali now strikes alone, ready to be the deadly weapon her people need. Though she holds onto all she learned from her master Shen, she has pledged to defend Ionia from its enemies, one kill at a time. Akali may strike in silence, but her message will be heard loud and clear: fear the assassin with no master.

Akali is an Assassin champion who employs stealthy hit-and-run tactics to take down her targets while evading retaliation. She uses a fixed Energy meter as a resource instead of mana.

In season 1 of Teamfight Tactics, Akali is a Tier 4 Ninja Assassin. Her Five Point Strike ability throws kunai in a cone-shaped area, damaging all foes with a chance of dealing a critical hit. She was removed in season 2.
Alistar, the Minotaur 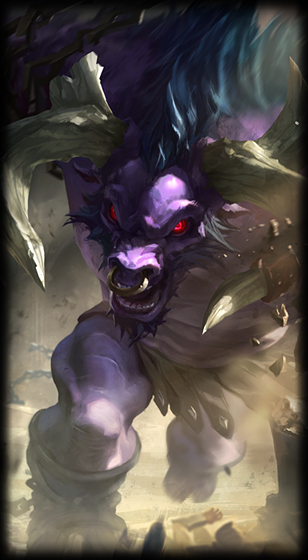 Nothing can hold me back!

Always a mighty warrior with a fearsome reputation, Alistar seeks revenge for the death of his clan at the hands of the Noxian empire. Though he was enslaved and forced into the life of a gladiator, his unbreakable will was what kept him from truly becoming a beast. Now, free of the chains of his former masters, he fights in the name of the downtrodden and the disadvantaged, his rage as much a weapon as his horns, hooves and fists.

Alistar is a Vanguard champion who uses crowd control to protect his allies and disrupt his enemies while stubbornly enduring all punishment thrown his way. 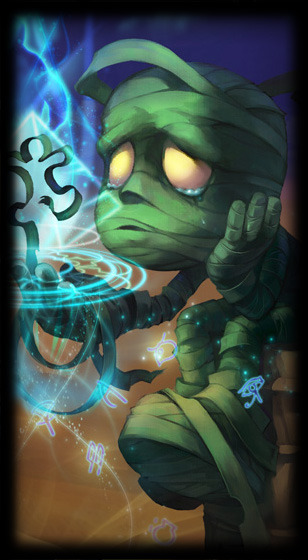 I thought you'd never pick me.

"Solitude can be lonelier than death."

Legend claims that Amumu is a lonely and melancholy soul from ancient Shurima, roaming the world in search of a friend. Doomed by an ancient curse to remain alone forever, his touch is death, his affection ruin. Those who claim to have seen him describe a living cadaver, small in stature and wrapped in creeping bandages. Amumu has inspired myths, songs, and folklore told and retold for generations—such that it is impossible to separate truth from fiction.

Amumu is a Vanguard champion that is feared for his initiation and ability to disable entire teams at once while unleashing a constant stream of area-of-effect damage.

, Infernal Amumu, and Hextech Amumu.
In Teamfight Tactics, Amumu was added in Season 2 as Tier 5 Inferno Warden, using his Infernal Amumu skin. His ability is Curse of the Sad Mummy, which damages and stuns all enemies in a wide area around him. 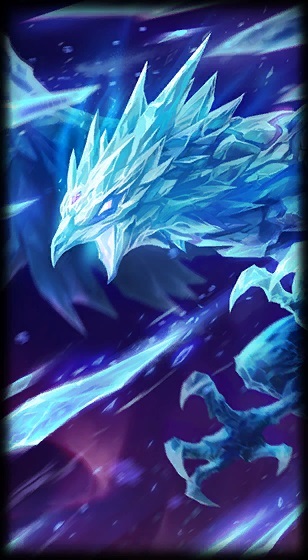 "I am the fury of the blizzard, the bite of the wind, and the cold of the ice. I am the Freljord."

Anivia is a benevolent winged spirit who endures endless cycles of life, death, and rebirth to protect the Freljord. A demigod born of unforgiving ice and bitter winds, she wields those elemental powers to thwart any who dare disturb her homeland. Anivia guides and protects the tribes of the harsh north, who revere her as a symbol of hope, and a portent of great change. She fights with every ounce of her being, knowing that through her sacrifice, her memory will endure, and she will be reborn into a new tomorrow.

Anivia is a Battle Mage champion who excels at controlling and denying areas of the battlefield with ice and freezing winds, while inflicting powerful burst damage on her enemies.

In season 1 of Teamfight Tactics, Anivia is a Tier 5 Glacial Elementalist. Her ability is Glacial Storm, which creates a long-lasting hailstorm that constantly damages enemies and reduces their attack speed. She was removed in season 2.
Annie, the Dark Child 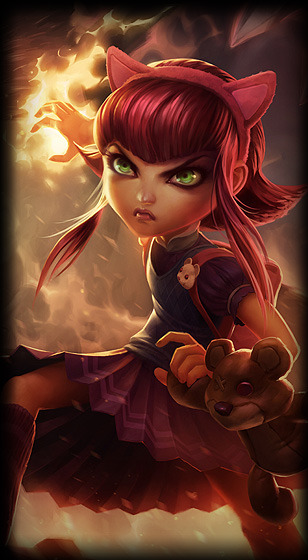 You wanna play too? It'll be fun!

"Ashes, ashes, they all fall down."

Dangerous, yet disarmingly precocious, Annie is a child mage with immense pyromantic power. Even in the shadows of the mountains north of Noxus, she is a magical outlier. Her natural affinity for fire manifested early in life through unpredictable, emotional outbursts, though she eventually learned to control these “playful tricks.” Her favorite includes the summoning of her beloved teddy bear, Tibbers, as a fiery protector. Lost in the perpetual innocence of childhood, Annie wanders the dark forests, always looking for someone to play with.

Annie is a Burst Mage champion with simple yet devastating abilities that grant her powerful burst damage and crowd control against both single targets and multiple foes at the same time.

In season 2 of Teamfight Tactics, Annie is a Tier 4 Inferno Summoner. Her ability is Tibbers!, which summons Tibbers as a giant minion near a target, damaging all enemies nearby and letting him fight for the rest of the round or until killed. She returns in season 3 as a 2 cost Mech Pilot Sorcerer, with Tibbers replaced by her Molten Shield.
Aphelios, the Weapon of the Faithful 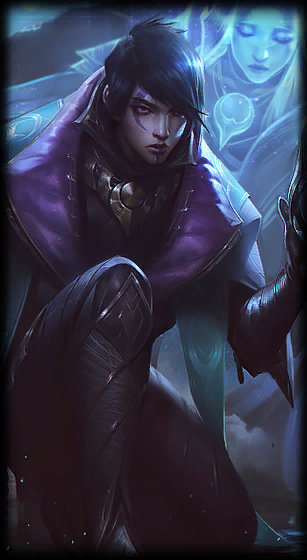 "Summon your weapons, Aphelios. The deadliest is your faith."

“Our faith is proven fate each time we deny it.”
— Alune

Emerging from moonlight’s shadow with weapons drawn, Aphelios kills the enemies of his faith in brooding silence—speaking only through the certainty of his aim, and the firing of each gun. Though fueled by a poison that renders him mute, he is guided by his sister Alune in her distant temple sanctuary from where she pushes an arsenal of moonstone weapons into his hands. For as long as the moon shines overhead, Aphelios will never be alone.

Aphelios is a very unique Marksman champion whose complex and highly demanding kit rewards skill, precision and timing with unparalelled versatily. His ability structure and layout act unlike those of any other champion in the game. 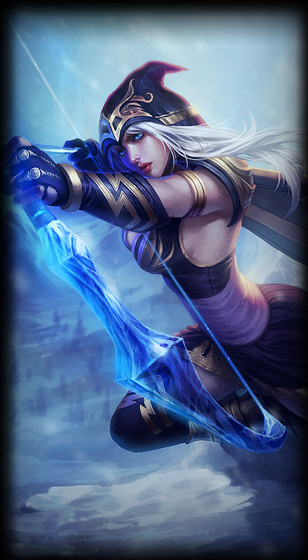 All the world on one arrow.

"One tribe, one people, one Freljord."

Iceborn warmother of the Avarosan tribe, Ashe commands the most populous horde in the north. Stoic, intelligent, and idealistic, yet uncomfortable with her role as leader, she taps into the ancestral magics of her lineage to wield a bow of True Ice. With her people’s belief that she is the mythological hero Avarosa reincarnated, Ashe hopes to unify the Freljord once more by retaking their ancient, tribal lands.

Ashe is a Marksman champion that exchanges lower overall damage for very high utility, with powerful crowd control effects and the ability to grant vision around the map.

In season 1 of Teamfight Tactics, Ashe is a Tier 3 Glacial Ranger. Her ability, Enchanted Crystal Arrow, fires an ice arrow that damages and stuns the first enemy hit, with the stun duration based an distance traveled by arrow. In season 2 her skin was changed to Amethyst Ashe, she was changed to a Tier 4 Crystal Ranger, and her ability was changed to Ranger's Focus, which gives her bonus attack speed for 5 seconds and causes her attacks to fire a flurry of shots each doing a percentage of her attack damage. In season 3 she is changed to a 3 cost Celestial Sniper with her PROJECT: Ashe skin and Enchanted Crystal Arrow returning as her ability.
Aurelion Sol, the Star Forger 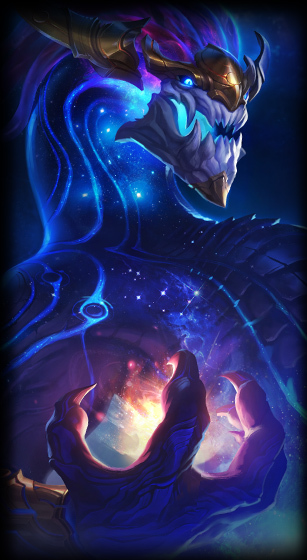 "Cower. Worship. Marvel. They are all appropriate responses."

Aurelion Sol once graced the vast emptiness of the cosmos with celestial wonders of his own devising. Now, he is forced to wield his awesome power at the behest of a space-faring empire that tricked him into servitude. Desiring a return to his star-forging ways, Aurelion Sol will drag the very stars from the sky, if he must, in order to regain his freedom.

In season 1 of Teamfight Tactics, Aurelion Sol is a Tier 4 Dragon Sorcerer. His ability is Voice of Light, which sends a wave of starfire that damages all enemies in a straight line. He was removed in season 2. He returns in season 3 as a 5 cost Rebel with the unique Starship buff which launches fighters that fly out to random enemies, deal magic damage, and then return.

Azir, the Emperor of the Sands 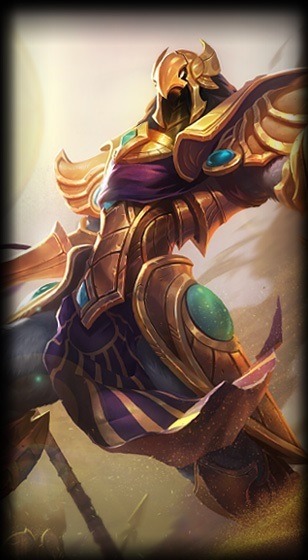 Shurima! Your emperor has returned!

“Shurima was once the glory of Runeterra. I will make it so again.”

Azir was a mortal emperor of Shurima in a far distant age, a proud man who stood at the cusp of immortality. His hubris saw him betrayed and murdered at the moment of his greatest triumph, but now, millennia later, he has been reborn as an Ascended being of immense power. With his buried city risen from the sand, Azir seeks to restore Shurima to its former glory.

Azir is a Specialist champion that summons and manipulates ancient Shuriman soldiers to fight for him, using them to control the battlefield and establish shifting zones of power.

In season 2 of Teamfight Tactics, Azir is a Tier 2 Desert Summoner. His ability is Arise!, summoning a Sand Soldier near an enemy that lasts for a few seconds and attacks whenever Azir does, hitting enemies in a line.