Characters / League of Legends: I to J

This page contains all champions beginning with the letters I to J. 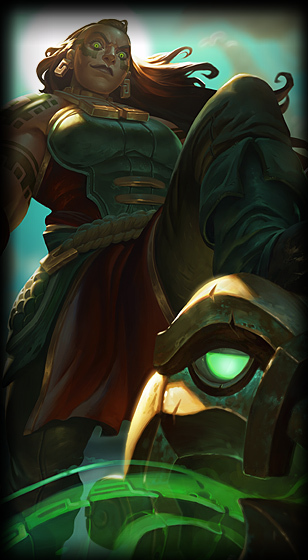 "Wisdom is frequently a kick in the head."

Illaoi’s powerful physique is dwarfed only by her indomitable faith. As the prophet of the Great Kraken, she uses a huge, golden idol to rip her foes’ spirits from their bodies and shatter their perception of reality. All who challenge the “Truth Bearer of Nagakabouros” soon discover Illaoi never battles alone—the god of the Serpent Isles fights by her side.

Illaoi is a Juggernaut champion who excels at hunkering down and establishing a zone of control at her current location, where fighting her becomes a fool's errand.

In season 3 of Teamfight Tactics, Illaoi was added in the Return to the Stars mid-set update using her Resistance Illaoi skin and is a 1 cost Battlecast Brawler. Her ability is Tentacle Smash, which slams a tentacle in a line in front of Illaoi, damaging all enemies hit and stealing a percentage of their armor and magic resistance.
Irelia, the Blade Dancer
note Irelia's was given a VGU. The folder for completely reworked champions can be found in the Others tab. 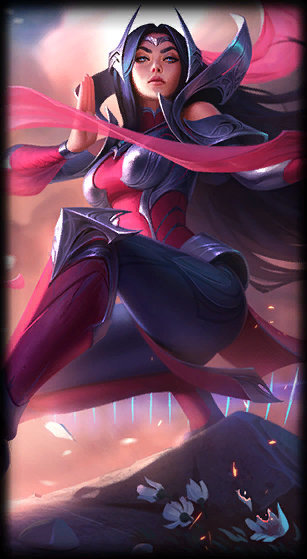 "Fight for the First Lands!"

"There was a time when I danced only for myself. Now, I dance for the First Lands."

The Noxian occupation of Ionia produced many heroes, none more unlikely than young Irelia of Navori. Trained in the ancient dances of her province, she adapted her art for war, using the graceful and carefully practiced movements to levitate a host of deadly blades. After proving herself as a fighter, she was thrust into the role of resistance leader and figurehead, and to this day remains dedicated to the preservation of her homeland.

Irelia is a Diver champion who gracefully dances through the battlefield, leaping from one enemy to another while eviscerating them in a whirl of telekinetic blades.

In season 3 of Teamfight Tactics, Irelia is a 4 cost Cybernetic Mana-Reaver Blademaster. With her Bladesurge ability, she darts to a champion, dealing a percentage of her Attack Damage as she passes through. If this kills the target, she casts again immediately at the enemy with the highest mana. 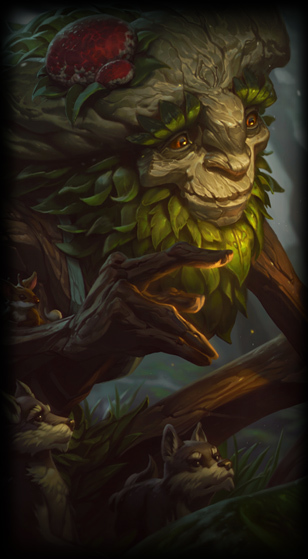 "My favorite color is spring."

"The cleverness of mushrooms always surprises me."

Ivern Bramblefoot, known to many as the Green Father, is a peculiar half man, half tree who roams Runeterra’s forests, cultivating life everywhere he goes. He knows the secrets of the natural world, and holds deep friendships with all things that grow, fly, and scuttle. Ivern wanders the wilderness, imparting strange wisdom to any he meets, enriching the forests, and occasionally entrusting loose-lipped butterflies with his secrets.

Ivern is a Catcher champion who is designed to be able to jungle without needing to fight its inhabitants, helping his allies from the jungle with his quirky set of abilities.

In season 2 of Teamfight Tactics, Ivern is a Tier 1 Woodland Druid. His ability is Triggerseed, which shields the lowest-health ally on his team. He was removed in season 3.
Janna, the Storm's Fury 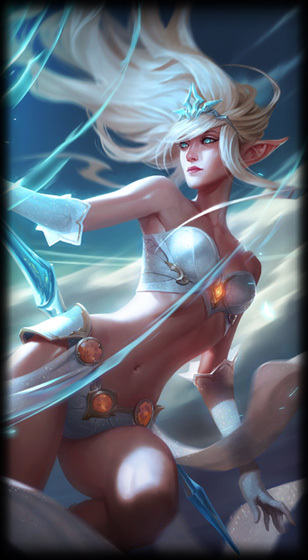 "The tempest is at your command."

"Do not fear the winds of change – they will always be at your back."

Armed with the power of Runeterra’s gales, Janna is a mysterious, elemental wind spirit who protects the dispossessed of Zaun. Some believe she was brought into existence by the pleas of Runeterra’s sailors who prayed for fair winds as they navigated treacherous waters and braved rough tempests. Her favor and protection has since been called into the depths of Zaun, where Janna has become a beacon of hope to those in need. No one knows where or when she will appear, but more often than not, she’s come to help.

Janna is an Enchanter champion who flits around the battlefield, using her wide array of disables and displacement abilities to keep enemies away from her allies.

In season 2 of Teamfight Tactics, Janna is a Tier 4 Cloud Mystic. Her ability is Monsoon, which knocks back and stuns all enemies near her and heals all allies within its area. She was initially removed in season 3, but returned in the Return to the Stars mid-set update using her Star Guardian Janna skin as a 5 cost Star Guardian Paragon, a class unique to her that converts all Star Guardian allies into dealing true damage with their basic attacks and other allies into dealing magic damage. Her ability was changed to Howling Gale, which sends forward 5 tornados in a cone that knock up and stun enemies hit while greatly increasing the attack speed of allies.
Jarvan IV, the Exemplar of Demacia 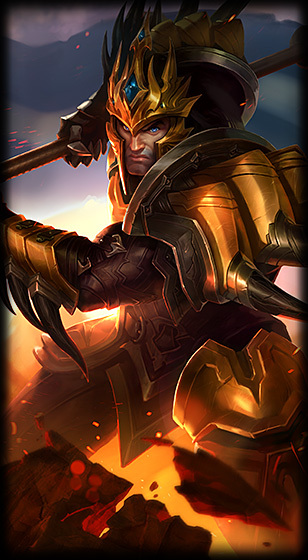 "By my will, this shall be finished!"

"Words may make a ruler, but only actions make history."

Prince Jarvan, scion of the Lightshield dynasty, is heir apparent to the throne of Demacia. Raised to be a paragon of his nation’s greatest virtues, he is forced to balance the heavy expectations placed upon him with his own desire to fight on the front lines. Jarvan inspires his troops with his fearsome courage and selfless determination, raising his family’s colors high and revealing his true strength as a future leader of his people.

Jarvan is a Diver champion who excels at initiating fights by jumping right in the middle of the enemy team, cutting enemies off from one another while he takes them down.

In season 3 of Teamfight Tactics, Jarvan is a 1 cost Dark Star Protector. With his Ageless Standard ability, he calls down a flag which grants his allies an attack speed bonus for 6 seconds. 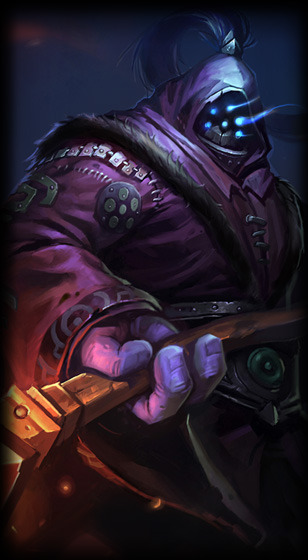 "Who wants a piece of the champ?"

Unmatched in both his skill with unique armaments and his biting sarcasm, Jax is the last known weapons master of Icathia. After his homeland was laid low by its own hubris in unleashing the Void, Jax and his kind vowed to protect what little remained. As magic now rises in the world, this slumbering threat stirs once more, and Jax roams Valoran, wielding the last light of Icathia and testing all warriors he meets to see if any are strong enough to stand beside him...

Jax is a Skirmisher champion with a simple set of abilities, dueling targets one on one and greatly increasing his damage the longer he is allowed to fight.

In season 2 of Teamfight Tactics, Jax uses his God Staff Jax skin, and is a Tier 2 Light Berserker. His ability is Counterstrike, which lets him dodge all enemy basic attacks for a few seconds then damaging and stunning all enemies around him. He was removed in season 3.
Jayce, the Defender of Tomorrow 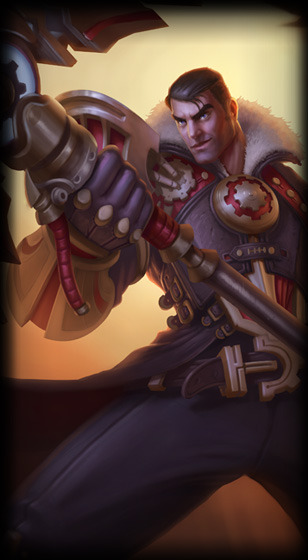 "I fight for a brighter tomorrow."

"Picking a fight with me is the dumbest thing you’ve done today – and that’s saying a lot."

Jayce is a brilliant inventor who has pledged his life to the defense of Piltover and its unyielding pursuit of progress. With his transforming hextech hammer in hand, Jayce uses his strength, courage, and considerable intelligence to protect his hometown. While revered throughout the city as a hero, he hasn’t taken well to the attention heroism brings. Still, Jayce’s heart is in the right place, and even those who envy his natural skills are grateful for his protection in the City of Progress.

Jayce is an Artillery Mage champion who deals with enemies both close and afar by switching his weapon between a short and long range form. He starts with a free rank of his ultimate ability, Transform, which allows Jayce to switch between the melee Mercury Hammer and the ranged Mercury Cannon. His ultimate is unique in that it cannot be ranked up, with his other abilities instead having six ranks rather than the standard five.

In season 1 of Teamfight Tactics, Jayce is a Tier 2 Hextech Shapeshiter. His Mercury Cannon ability damages and knocks back nearby enemy, then transforms his weapon into its ranged form, granting him temporary attack speed boost. He was removed in season 2. He returns in season 3 as a 3 cost Space Pirate Vangaurd bearing his To The Skies! ability, which deals magic damage to nearby enemies.
Jhin, the Virtuoso 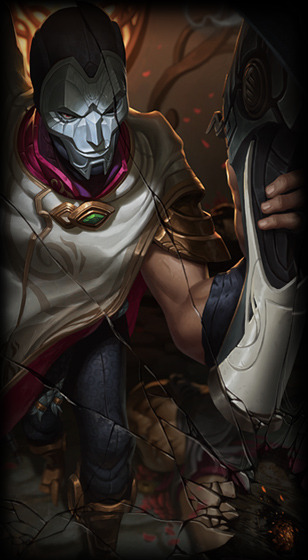 "In carnage I bloom, like a flower in the dawn."

Jhin is a meticulous criminal psychopath who believes murder is art. Once an Ionian prisoner, but freed by shadowy elements within Ionia’s ruling council, the serial killer now works as their cabal's assassin. Using his gun as his paintbrush, Jhin creates works of artistic brutality, horrifying victims and onlookers. He gains a cruel pleasure from putting on his gruesome theater, making him the ideal choice to send the most powerful of messages: terror.

Jhin is a Marksman/Catcher hybrid that excels at meticulously setting up his enemies' demise with long-range crowd control followed by powerful burst damage.

In season 3 of Teamfight Tactics, Jhin is a 4 cost Dark Star Sniper. With his Whisper ability, he converts each 1% of bonus attack speed he has into .8 attack damage. Every fourth shot also deals bonus % attack damage. 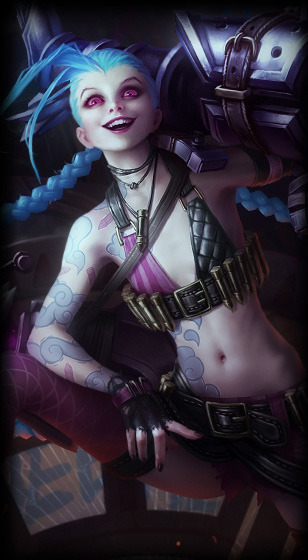 "Rules are made to be broken... like buildings! Or people!"

A manic and impulsive criminal from Zaun, Jinx lives to wreak havoc without care for the consequences. With an arsenal of deadly weapons, she unleashes the loudest blasts and brightest explosions to leave a trail of mayhem and panic in her wake. Jinx despises boredom, and gleefully brings her own chaotic brand of pandemonium wherever she goes.

Jinx is a Marksman champion who sacrifices mobility and defensive abilities for extremely high sustained and poke damage with her arsenal of various weapons.

In season 1 of Teamfight Tactics, Jinx is a Tier 4 Hextech Gunslinger. Her ability, Get Excited!, is a passive that triggers when she scores takedowns - the first one grants her increased attack speed, and the second switches her weapon to Fishbones, causing her attacks to deal splash damage. She was removed in season 2. She returns in season 3 with the same cost and ability, but was changed to use her Odyssey Jinx skin and reclassified as a Rebel Blaster.

In Legends of Runeterra, Jinx is a 4-mana 4/3 Piltover & Zaun Champion with Quick Attack. When he controller empties their hand while she's in play she levels up, gaining +1/+1, causing her controller to draw an extra card at the start of each round, and generating a Super Mega Death Rocket (a Fleeting 1-mana Slow spell that deals 4 damage to the enemy Nexus and 1 damage to all their other units) the first time each round she sees her controller empty their hand. Her signature spell is Jinx's Get Excited!