This page contains all champions beginning with the letter G to H. 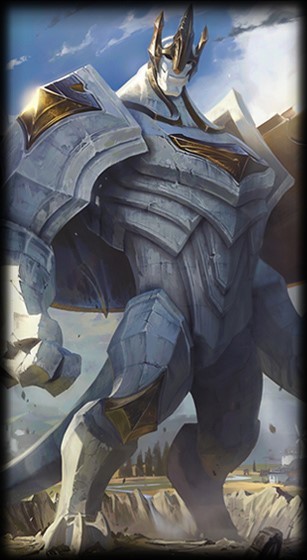 "Time to make an impact!"

"Get behind me, Demacian! You may not have noticed, but I’m very large."

Outside the gleaming city of Demacia, the stone colossus Galio keeps vigilant watch. Built as a bulwark against enemy mages, he often stands motionless for decades until the presence of powerful magic stirs him to life. Once activated, Galio makes the most of his time, savoring the thrill of a fight and the rare honor of defending his countrymen. But his triumphs are always bittersweet, for the magic he destroys is also his source of re-animation, and each victory leaves him dormant once again.

Galio is a Warden champion who excels at coming to his allies' rescue, defending them and forcing enemies to attack him, while also dealing substantial area-of-effect damage. 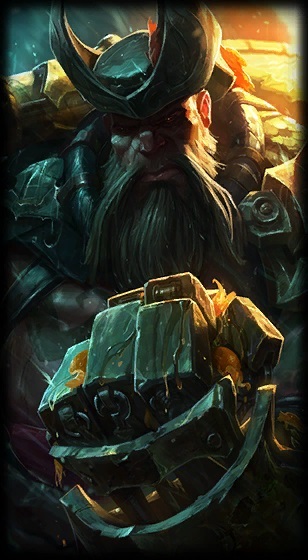 "Neither the flames nor the depths could claim me."

"I was cutting throats and sinking Noxian war galleys when you were still pissing your britches, boy. You don't want to take me on."

As unpredictable as he is brutal, the dethroned reaver king Gangplank is feared far and wide. Once, he ruled the port city of Bilgewater, and while his reign is over, there are those who believe this has only made him more dangerous. Gangplank would see Bilgewater bathed in blood once more before letting someone else take it—and now with pistol, cutlass, and barrels of gunpowder, he is determined to reclaim what he has lost.

Gangplank is a Specialist champion, charging in and out of combat and controlling areas with explosive barrels while growing in power the more loot he can plunder.

In season 1 of Teamfight Tactics, Gangplank is a Tier 3 Pirate with both Gunslinger and Blademaster classes. His ability, Powder Kegs, passively spawns untargetable barrels in random locations. Activating it detonates all barrels, dealing damage and applying on-hit effects to all nearby enemies. He was removed in season 2. He returns in season 3 as a 5 cost Space Pirate Mercenary Demolitionist, with his Powder Kegs replaced by his Cannon Barrage.

In Legends of Runeterra, Gangplank is a 5-mana 5/5 Bilgewater Champion with Overwhelm, who summons a Powder Keg when summoned. When his controller damages the enemy Nexus in 5 separate rounds he levels up, gaining +1/+1, passively summoning an additional Powder Keg at the start of every round, and casting the skill Powderful Explosion (which does 1 damage to all enemies, including the Nexus) every time he attacks. His signature spell is Gangplank's Parrrley.
Garen, the Might of Demacia 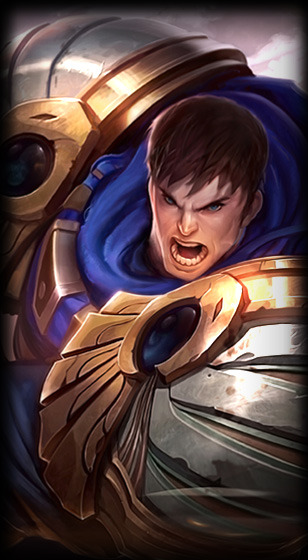 "My heart and sword, always for Demacia."

"This kingdom, and its people, have given me everything. What kind of man would I be if I gave any less in return?"

A proud and noble warrior, Garen fights as one of the Dauntless Vanguard. He is popular among his fellows, and respected well enough by his enemies—not least as a scion of the prestigious Crownguard family, entrusted with defending Demacia and its ideals. Clad in magic-resistant armor and bearing a mighty broadsword, Garen stands ready to confront mages and sorcerers on the field of battle, in a veritable whirlwind of righteous steel.

Garen is a Juggernaut champion with simple but effective abilities, recovering from damage and charging towards his foes to deliver punishment. He does not use mana or any other resources, with his abilities only being limited by cooldowns.

In season 1 of Teamfight Tactics, Garen is a Tier 1 Noble Knight. His ability Judgement, causes him to spin for several seconds, damaging all nearby enemies, and grants him temporary immunity to magic damage. He was removed in season 2. Though not a playable champ in season 3, Garen returns as the Mech-Pilot buff active, which combines three champs into a giant version of Mecha Kingdoms Garen sporting his Demacian Justice ability.

In Legends of Runeterra, Garen is a 5-mana 5/5 Demacia Champion with Regeneration. When he strikes anything twice he levels up, gaining +1/+1 and giving his controller a Rally at the start of each round, allowing them to attack during the enemy's round. His signature spell is Garen's Judgement.
Gnar, the Missing Link 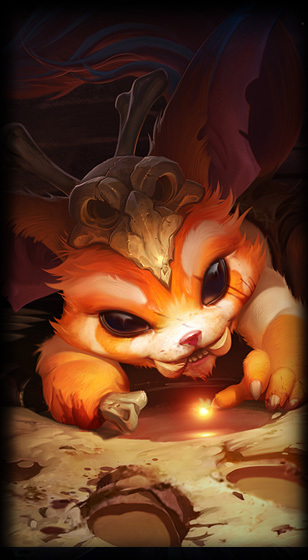 Gnar is an excitable yordle whose playful antics can erupt into a toddler’s outrage in an instant, transforming him into a massive beast bent on destruction. Frozen in True Ice for millennia, the curious creature broke free and now hops about a changed world he sees as exotic and wondrous. Delighted by danger, Gnar flings whatever he can at his enemies, be it his bonetooth boomerang... or an uprooted tree.

Gnar is a Specialist champion who shapeshifts from a squishy ranged form into a durable melee form without the player's control, forcing them to anticipate and play accordingly to his fits of rage. He does not use mana or any other resources, with his abilities only being limited by cooldowns.

In season 1 of Teamfight Tactics, Gnar is a Tier 4 Shapeshifter with both Wild and Yordle origins. His ability, GNAR!, transforms him into Mega Gnar, increasing his health and damage, then causes him to jump to the furthest enemy and shove every nearby enemy towards his team, damaging and stunning them. He was removed in season 2. He returns in season 3's Return to the Stars mid-set update with the same cost and ability, but was changed to use his Astronaut Gnar skin and reclassified as an Astro Brawler.
Gragas, the Rabble Rouser 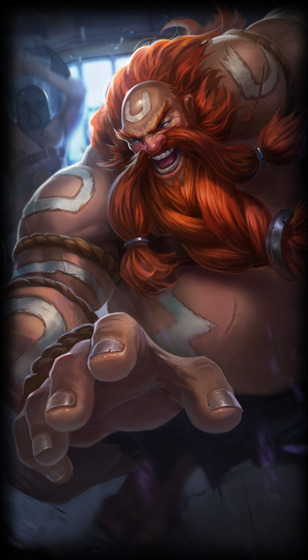 Equal parts jolly and imposing, Gragas is a massive, rowdy brewmaster on his own quest for the perfect pint of ale. Hailing from parts unknown, he now searches for rare ingredients among the unblemished wastes of the Freljord, trying each recipe as he goes. Often intoxicated and extremely impulsive, he is legendary for the brawls he starts, which often end in all-night parties and widespread property damage. Any appearance from Gragas must surely foreshadow drinking and destruction—in that order.

Gragas is a Vanguard champion who slams right into the enemy team, enduring incoming damage while throwing down powerful area-of-effect damage and crowd control. 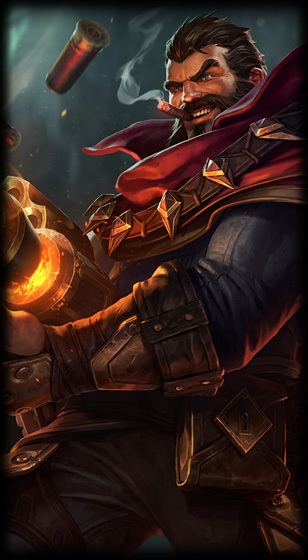 "We’re here for your gold, not your heads, so don’t nobody decide to be a hero."

Malcolm Graves is a renowned mercenary, gambler, and thief—a wanted man in every city and empire he has visited. Even though he has an explosive temper, he possesses a strict sense of criminal honor, often enforced at the business end of his double-barreled shotgun Destiny. In recent years, he has reconciled a troubled partnership with Twisted Fate, and together they have prospered once more in the turmoil of Bilgewater’s criminal underbelly.

Graves is a Specialist champion who is encouraged to fight up close and personal despite being ranged, unleashing powerful short range burst damage with his shotgun.

In season 1 of Teamfight Tactics, Graves is a Tier 1 Pirate Gunslinger. His Buckshot is a passive ability that causes his basic attacks to deal bonus damage and hit all enemies in a cone-shaped area. He was removed in season 2. He returns in season 3 as a 1 cost Space Pirate Blaster, sporting his Smoke Grenade ability which causes all champs to miss for 4 seconds.
Hecarim, the Shadow of War 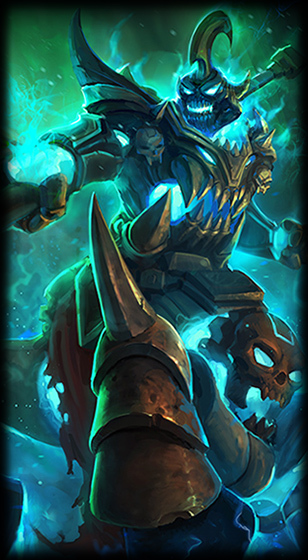 "Break their ranks and ride them down without mercy. Crush the living and feast on their terror."

Hecarim is a spectral fusion of man and beast, cursed to ride down the souls of the living for all eternity. When the Blessed Isles fell into shadow, this proud knight was obliterated by the destructive energies of the Ruination, along with all his cavalry and their mounts. Now, whenever the Black Mist reaches out across Runeterra, he leads their devastating charge, reveling in the slaughter and crushing the foe beneath his armored hooves.

Hecarim is a Diver champion adept at using his high speed to dive right into the enemy team, spreading chaos and mayhem while he hacks and slashes his way through.

In Legends of Runeterra, Hecarim is a 6-mana 5/5 Shadow Isles Champion with Overwhelm, who summons two attacking 2/2 Spectral Riders with Ephemeral whenever he attacks. When his controller attacks with 7 or more Ephemeral allies during a game he levels up, gaining +1/+/1 and passively giving all Ephemeral allies +3/+0. His signature spell is Hecarim's Onslaught of Shadows.
Heimerdinger, the Revered Inventor 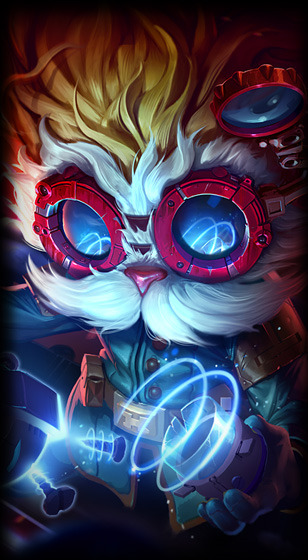 "Impossible, you say? Nonsense. Just wait till you see my calculations!"

A brilliant yet eccentric yordle scientist, Professor Cecil B. Heimerdinger is one of the most innovative and esteemed inventors Piltover has ever known. Relentless in his work to the point of neurotic obsession, he thrives on answering the universe’s most impenetrable questions. Though his theories often appear opaque and esoteric, Heimerdinger has crafted some of Piltover’s most miraculous—not to mention lethal—machinery, and constantly tinkers with his inventions to make them even more efficient.

Heimerdinger is a Specialist champion who uses his versatile inventions to deal with different situations, deploying significant sustained damage, burst and crowd control as needed.

In Legends of Runeterra, Heimerdinger is a 5-mana 1/3 Piltover & Zaun Champion. Whenever his controller casts any spell, he generates a Turret follower in his hand depending on its cost, each of which has Power equal to the mana cost of the spell that created it and 1 Health and a different ability, except for spells costing 8 or more which generate an 8/8 T-Hex. The Turrets are Fleeting when created, but cost 0 mana on the turn they're created (although if sent back to their controller's hand they aren't Fleeting and regain their usual cost). When Heimerdinger sees 12+ Power worth of his Turrets played he levels up, gaining +1/+1 and granting all further Turrets he creates +1/+1. His signature spell is Heimerdinger's Progress Day.