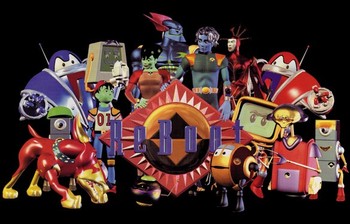 Characters that appear in ReBoot: 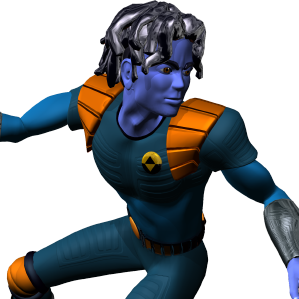 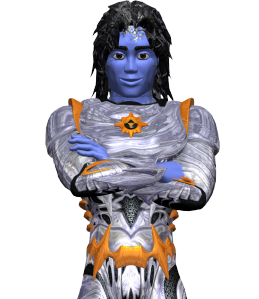 The Hero. Bob is a Guardian. The Guardians are the net's equivalent to a police force, based in the Super Computer. Their purpose is to mend and defend: repairing damage caused by tears and fighting viruses. Assisted by his Keytool Glitch, Bob has been assigned as the Guardian of the small system of Mainframe, defending the locals from their two resident viruses: Megabyte and Hexadecimal. In Mainframe, Bob is looked up as some sort of Super Hero, especially by young Enzo, who dreams of becoming a Guardian himself. Bob is more prone to the Indy Ploy in comparison to Dot's The Chessmaster approach. Had a Will They or Won't They? thing going with Dot, until they decided to get married. 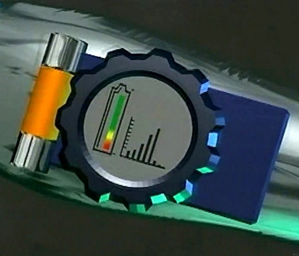 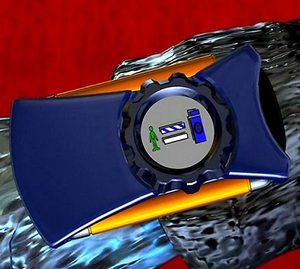 Glitch is Bob's Keytool. It has the ability to become any object on command, as well as other powers such as analyzing the rules of a game. The exact limitations of Glitch's Imagination-Based Superpower abilities: it can only do one thing at a time, it's implied it cannot duplicate some of the rarer weapons Bob requisitions from Phong, it doesn't seem capable of turning into a sophisticated or large vehicle (though it can manage a hang-glider or a helicoptery thing to pull Bob out of a fall), and it does not have unlimited energy. Glitch is sentient, though it seems only a Guardian can understand its beeping language. Glitch was damaged at the end of season 2, making it unable to morph and project energy but still capable of scanning anything and everything. Later it merged with Bob, and was later unmerged and upgraded into Glitch 2.0 (whose exact capabilities are unknown). 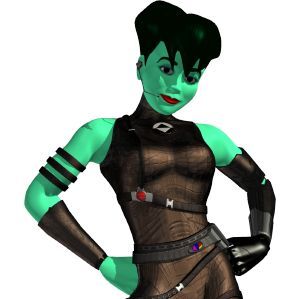 The leader of Mainframe (she took over the position from, according to Word of God, an unseen sprite whom Phong represented sometime between the end of season 2 and the end of season 3). Dot is for most of the series The Chick and Bob's main love interest. She owns Dot's Diner, a small diner that often served as headquarters to the heroes in the early seasons. Enzo is her little brother. Dot is known to be very organized and almost incapable of doing anything unless she has a plan. However, once she does have a plan, things usually go right. 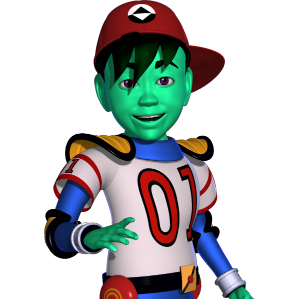 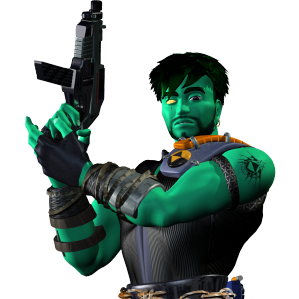 Originally Dot's Bratty Half-Pint brother. He hero-worshipped Bob. Later in the 3rd season, he underwent a Plot-Relevant Age-Up into a super strong badass with a short fuse, a hatred of viruses, and a homicidal hatred of Megabyte in particular. The adult Enzo has a copy of Bob's Guardian code, meaning that he has technically all the immunities a Guardian has to the web and viral infections, although he never had any Guardian training. The lack of training, however, does not make him any less dangerous (Heck, it probably makes him more dangerous). At the end of Season 3, Enzo accidentally left his icon in Game Sprite mode, causing the system to "re"-create him from an earlier backup(right after Bob "updated" him to a Guardian cadet just before the Web invasion). The original Enzo usually goes by the name "Matrix", which he picked up while traveling the games. 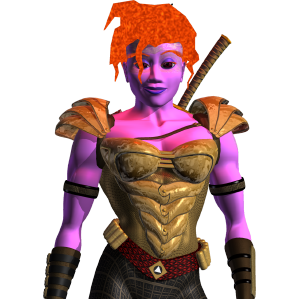 Mouse was first mentioned as an old "associate" of Bob's before showing up as a mercenary working for Megabyte. She was quick to join the heroes, however, after Megabyte double-crossed her. She managed to simultaneously be an Action Girl while mostly taking Dot's place as The Smart Girl. 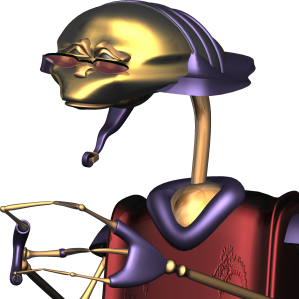 The oldest and wisest sprite in Mainframe, who lives in the Principal Office and oversees the system. A frequent target of Megabyte's schemes, nevertheless he does what he can in order to stop him with the help of the others. 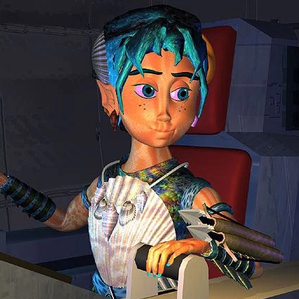 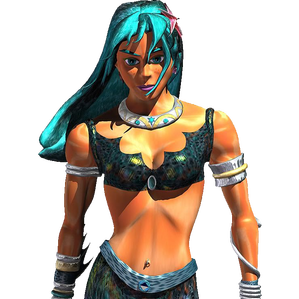 Originally a game sprite, AndrAIa met young Enzo in an aquatic game and they became friends. As the game ended, she attached a copy of her data to Enzo's icon so that said copy would leave the game with Enzo and could stay with him. Aged up along with Enzo, becoming an Action Girl and Love Interest. 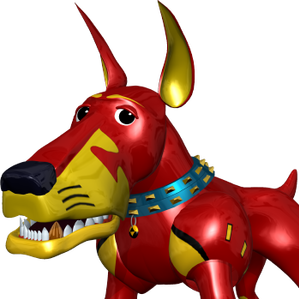 Enzo's dog. He has been known to chew tanks and growl at Bob. 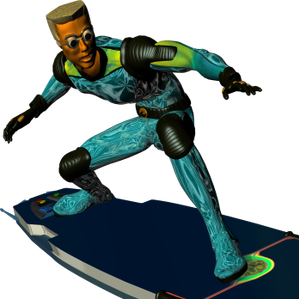 A type of enhanced Search Engine, Ray meets Matrix and AndrAIa in a desert system where he is being detained by the authorities. He ends up joining their group because he can guide them through the Web, although he simultaneously causes Matrix much grief by flirting with AndrAIa. But in the end, Matrix accepts him. Ray later becomes the love interest of Mouse. 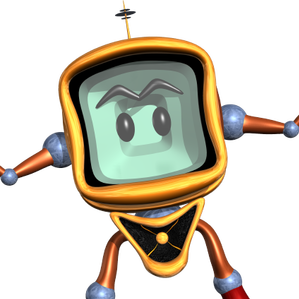 Mike is Bob's TV. Bob could never turn him off because the remote ran away. Mike talks a LOT. All the time. Usually reciting Stock Phrases, or advertisements he used to show. Around Mainframe, Mike is the closest thing to a news anchor, presenting news, narrating documentaries, and other such jobs in the visual media (including speaking with the drawl often associated with televangelists, while infected by Daemon). Mike has a great talent at annoying other characters (although the Supervirus Daemon seemed to enjoy his company). He's a coward who will constantly remind people that he's a personal friend of Bob. 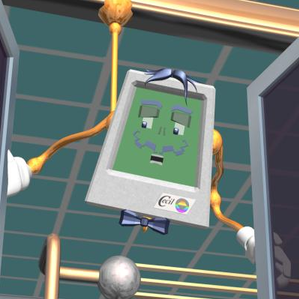 Cécil is a stereotypical French waiter at Dot's Diner. He is a video screen with arms and very French-looking facial features, although he has no legs. Instead he movies around on a pole attached to slide tracks in the ceiling. That is until the diner is destroyed and his pole gets attached to a zipboard, allowing him to move more freely. He tends to be rude but is nevertheless loyal to his boss Dot.

He resembles an old Macintosh computer, complete with a rainbow-colored icon. 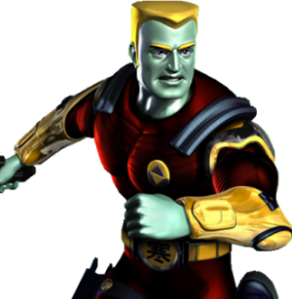 "The Crimson Binome" and the Saucy Mare Crew 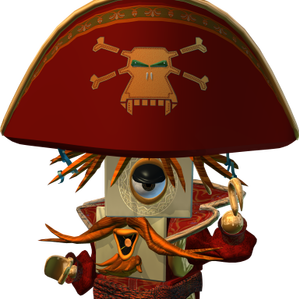 Captain Capacitor (Or, as he likes being called, "The Crimson Binome") is the captain of the Saucy Mare and its crew of pirates. He is a one binome and a fairly honorable man. Originally dealt in piracy, until Dot convinced him that legal business was more profitable (the damage done to his operation by kidnapping Bob, who subsequently escaped helped drive the point home). He later became an ally of Mainframe, especially Matrix, whom he helped search the web for Bob. His crew includes his nerdy accountant Mr. Christopher, and Princess Bula, an Amazonian giant one binome. 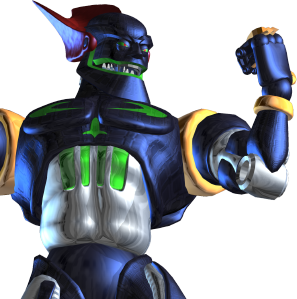 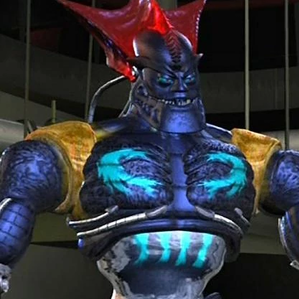 The Big Bad. A virus that styles himself after an Evil Overlord. He alternatively seeks to take over Mainframe or enter the Super Computer, where he could infect its vast resources to take over the entire Net. He is The Virus, having the ability to infect Binomes and turn them into his Mooks. He is very powerful, so much that only three people would dare face him one-on-one in direct combat: Bob, Matrix, and Hexadecimal. Oh, and speaking of Hexadecimal, she is his sister. 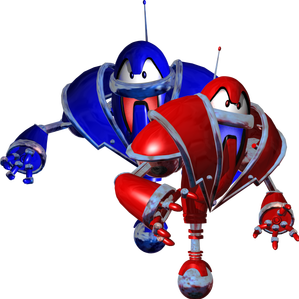 Megabyte's two bumbling henchmen who often screw up their given tasks. Both are rather fond of Bob despite being his enemy and have aided him on occasion. Not willing to cross the Moral Event Horizon by deleting a binome on Megabyte's orders (because Bob wasn't there to stop them, in their own words) or left for dead, they later join the side of good. Hack, the red one, has a higher-pitched voice (the voice of Rattrap, to be precise) and tends to be rather callous, while Slash, the blue one, has a deeper voice and is more sensitive and kind than Hack.

Tropes associated with Hack and Slash: 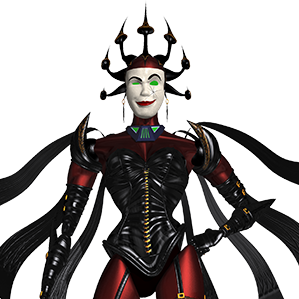 A benign virus and Megabyte's sister who lives in the ruins of Mainframe's former twin city, now known as Lost Angles. Essentially chaos incarnate, using the title of The Queen Of Chaos, with unpredictable mood swings and a flair for art and drama. Starts out rather villainous, but mellows out under Bob's influence, and in fact joins the heroes as a Sixth Ranger during season 4. Hexadecimal is powerful. REALLY powerful. As in she can single-handedly massacre Megabyte's entire forces on her own without breaking a sweat, and Megabyte knows better than to engage her in a straight-on fight. 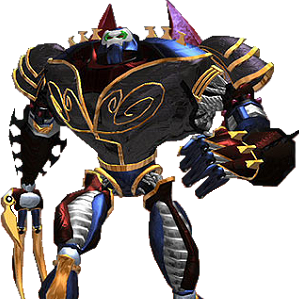 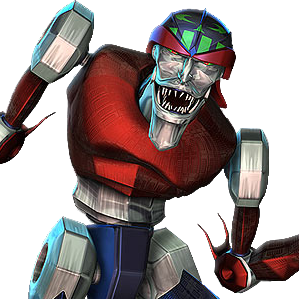 Gigabyte is the combined form of Megabyte and Hexadecimal forced together by the Web creature. When he first appeared, his only stated goal was to absorb energy and reach his full potential. It's revealed much later that Gigabyte came first, and an accident split him into Megabyte and Hexadecimal. Originally a virus named Killabyte who had failed to take over the supercomputer, he was set to be deleted before receiving a "viral upgrade" into the monster he is now. Dr. Matrix's experiment to contact other systems pulled Gigabyte into Mainframe, which had the effects of destroying the twin system into Lost Angles, and splitting him into his two composite pieces. 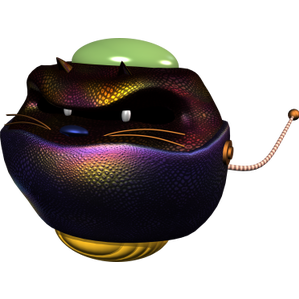 Scuzzy is Hexadecimal's familiar. He is a small, cat-like creature who lives with his mistress in her lair, and serves as her pet and spy. He has a domed view screen on top of his head that can record anything he has witnessed and is small enough to sneak into any area undetected (even Silicon Tor). He is very cunning, sly, and extremely loyal to Hex - although he isn't ignorant of the fact that she's crazy. 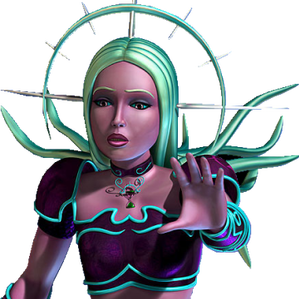 Daemon is by far the most powerful virus to ever hit the Net. She's a kind and gentle person when you talk to her, but she can enslave entire systems with a touch, will sacrifice any number of troops to achieve her goals, and is out to crash the entire Net.

Tropes associated with Daemon include:

The User is the owner of the computer that is Mainframe. He is He Who Must Not Be Seen because he's a human living in the real world, but he still plays a major role in the series, acting as an antagonist during the games. He is viewed by most of the inhabitants of Mainframe as some sort of god. Capable of both great evils (such as the sector-nullifying games) and goods (new files). The User is generally seen in game cubes under the guise of a Player Character which the inhabitants of Mainframe have to stop from winning.

Tropes associated with The User: