Damsel out of Distress
aka: Badass Damsel 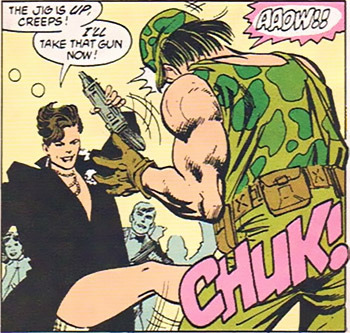 Lois Lane: Rescuing herself before Superman arrives since 1938.
"Harkye, miscreant, you have secured me, and I am your poor prisoner; but if you think I cannot take care of myself, you are very much mistaken. Now then, it's one to one, and let the best man win!"
— Dame Hannah, Ruddigore
Advertisement:

Rejecting the traditional Damsel in Distress routine, this damsel doesn't wait for a hero to rescue her. She can take care of herself, thank you very much. This trope occurs when the damsel escapes on her own or at least makes significant progress towards it before the hero can find her. Extra points if she manages to do it still bound; even more if she then helps the hero escape the danger he's putting himself into.

Compare with Play-Along Prisoner, Lady of War for a skillful and graceful fighter, Silk Hiding Steel is this trope's prim and proper relative, Xenafication for inexplicable badass leveling up, Deliberately Distressed Damsel who enjoys the damsel aspect, and Decoy Damsel who pretends to be a Damsel in Distress for her own benefit.

Contrast Damsel Scrappy and Too Dumb to Live. Should not be confused with Badass in Distress, but can overlap with it. Compare Defiant Captive, which is about a defiant mindset while captured.

The team goes on a mission to rescue the captured Dove, and find she's already made some progress toward rescuing herself.

The team goes on a mission to rescue the captured Dove, and find she's already made some progress toward rescuing herself.