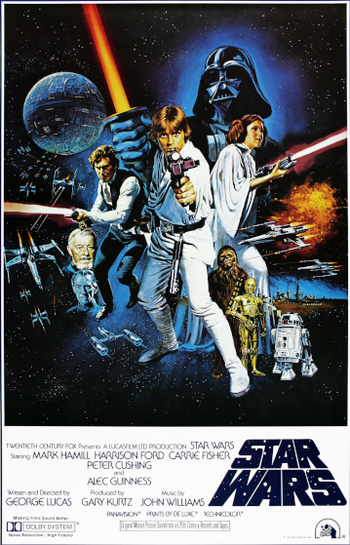 Obi-Wan: Remember, The Force will be with you, always.note Clockwise from top right: Darth Vader, Princess Leia, Chewbacca, C-3PO and R2-D2, Grand Moff Tarkin, Obi-Wan Kenobi, Han Solo, and Luke Skywalker.
It is a period of civil war. Rebel
spaceships, striking from a hidden
base, have won their first victory
against the evil Galactic Empire.

During the battle, Rebel spies managed
to steal secret plans to the Empire's
ultimate weapon, the DEATH STAR, an
armored space station with enough
power to destroy an entire planet.

Pursued by the Empire's sinister agents,
Princess Leia races home aboard her
starship, custodian of the stolen plans
that can save her people and restore
freedom to the galaxy....
Advertisement:

Star Wars (later retitled Star Wars: Episode IV — A New Hope) is a Space Opera film that marks the first chapter of the Star Wars saga and the beginning of the franchise, as well as the start of its enduring phenomenon in pop culture. It was written and directed by George Lucas, and released on May 25, 1977.

A New Hope tells the story of Luke Skywalker (Mark Hamill), a young Farm Boy on a desert planet at the far edge of the tyrannical Galactic Empire. Luke's quiet life is turned upside down when his family purchases a pair of used droids named R2-D2 and C-3PO (Kenny Baker and Anthony Daniels), who are secretly carrying classified Imperial documents: the schematics for a planet-destroying Doomsday Device known as "the Death Star".

With the aid of a wise, mystical hermit named Obi-Wan Kenobi (Alec Guinness) and a rakish smuggler named Han Solo (Harrison Ford), Luke sets out to rescue the droids' owner, the captive rebel princess Leia Organa (Carrie Fisher), and deliver the documents to the Rebellion before the Empire can unleash the Death Star on the galaxy and crush the fledgling revolution.

As an Episode of the "Skywalker Saga", the film is chronologically preceded by Revenge of the Sith and Star Wars Rebels and followed by The Empire Strikes Back. Solo functions as a distant prequel to Han Solo's and Chewbacca's situation in this film, Obi-Wan Kenobi serves as a distant prequel to Obi-Wan Kenobi's situation in this film and Rogue One is an immediate prequel detailing how the Rebels got their hands on the plans of the Death Star.

These are the tropes you are looking for:

open/close all folders
Tropes # to B
Tropes C to D
Tropes E to F
Tropes G to H
Tropes I to J
Tropes K to L
Tropes M to N
Tropes O to R
Tropes S to V
Tropes W to Z
"Great shot, kid! That was one in a million!"
Feedback