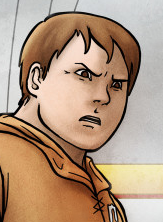 "We try things. Occasionally they even work."

The protagonist of this story, Parson was a geeky gamer, fat slob, and all-around loser on this little world called Earth. He expressed a major desire to live in game worlds and command a real battle. Coincidentally, certain forces on Erfworld decided they needed a perfect general, and cast a spell to summon one from any plane of existence. And thus, his story begins.

"Oh, for these I have wrecked and ruined more than you have."

The caster that summoned Parson. Wanda serves as Stanley's chief adviser, and frequently manipulates him into taking actions and risks that further her own goals. She heard several predictions in her youth that she has since striven to fulfill. When most of them come to pass, she becomes a strong believer in fate. She's a Croakamancer, but has skill with many magic disciplines. 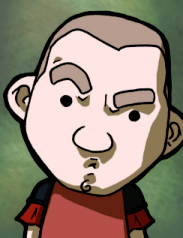 Click here to see him in his war paint 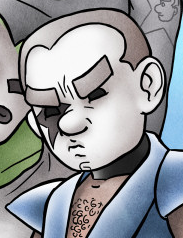 The leader of Gobwin Knob. Rose up from a simple pikeman to a Warlord. From there, he found the Arkenhammer, tamed dwagons, and (maybe) staged a coup to become Overlord of his side. The story begins with him in dire straits, leading Wanda to maneuver him into ordering the summoning of a perfect Warlord.

The second member of Gobwin Knob's casters. Sizemore's talents at Dirtamancy went relatively unused before Parson because few others saw the potential for traps and so on. He hates violence with a passion and thus struggles internally with the fact that his new commander uses his abilities to their fullest extent. While a talented Dirtamancer, he studies other magic disciplines out of genuine interest. Despite this, he has little skill with spells of any discipline other than Dirtamancy. 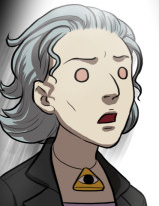 "We are called. We serve. Perhaps... we are never sure our cause is just. But we know the need is real. We know if we have done our duty."

Gobwin Knob's third caster, and Parson's closest confidante and advisor. She has a fairly reserved and pragmatic personality, though she shows hints of a good sense of humor. She has great personal belief in Parson's abilities, but this doesn't stop her from questioning some of his choices. As Gobwin Knob's Thinkamancer, she uses telepathy to oversee units and relay orders and information to/from Gobwin Knob.

"I'm afraid I don't understand, Lord. And also afraid that I do."

Rounding off Gobwin Knob's group of casters is Jack Snipe. Popped in the kingdom of Faq, Jack was originally the reason for its status as a hidden kingdom. He is a master-class Foolamancer, though this was not fully evident until halfway through Book One. Since the Battle of Gobwin Knob, Jack has taken a much more active role in the story as one of Parson's greatest subordinates. Unlike most other Erfworld units, he loves riddles, philosophy, and "lateral thinking," making him one of the few characters to fully embrace Parson's position as Chief Warlord.

"Croaking is an art, like everything else. I do it exceptionally well."

After the Battle for Gobwin Knob, Wanda decrypted nearly the entire first Royal Crown Coalition Army. In addition to Ansom, Gobwin Knob added Sylvia to its roster of high-level Warlords. She has taken to her new post with more alacrity than most, as she desires combat and destruction with little regard for "sides."

An Archon formerly in Charlie's service. She was decrypted at the Battle for Gobwin Knob and later captured by Jetstone so that Charlie could learn more about Decryption.

Formerly the Tower of Jenga in Jetstone, Jed was awakened by one of Parson's ideas, which involved mixing Dirtamancy, Thinkamancy and Dollamancy.

One of the Arkentools, said to have been used by the Titans to build Erfworld. Wanda attuned to it, giving her the power to create Decrypted. It is eventually awakened as part of a desperate experiment by the Great Minds, in an attempt to preserve their lives.

"By strength and by duty and by honour does Royalty lead all, in the Titans' path."

The most prominent antagonist of Book 1. Ansom is a Chief Warlord who leads the forces that threaten Gobwin Knob with complete annihilation. He is a competent strategist and, at level 10, a very powerful warrior. He holds that Royalty is a mandate from the Titans to rule for the entire first book. 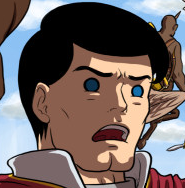 "But I am what I am. And so here I stand. I will make you and the Titans prove your claim."

Slately ordered a prince popped in Dhrystone as another heir to the Jetstone Royal Side. Jetstone's most spartan and militant Level Five City produced a suitably hardened and imposing warrior. The youngest of the three sons of Jetstone, Ossomer holds to the ideals of honor and Nobility even more than his elder, Ansom. He cares little for diplomacy, preferring instead to let his sword sue for "peace." At 9th level, it makes a very convincing argument.

The Jetstone Prince popped after Ansom and before Ossomer. He is weaker than both in fighting ability, but his mental faculties may be the greatest of the three. His strategy appears to be on par with or greater than Ansom's, but he also has a much greater understanding of psychology and diplomacy. He was never made heir because he doesn't live up to King Slately's Royal ideals. 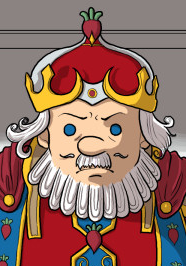 The Ruler of Jetstone for over three thousand turns. During his reign, Jetstone has remained the strongest side in Erfworld, mostly thanks to the competence of his sons and daughters. Slately holds to Royal tenets even more than Ansom, yet privately acknowledges that he doesn't live up to them in reality. He has only seen combat once.

The Dollamancer of Jetstone. He has a lot of friction with the other casters and warlords of the kingdom, as they wanted a plush Dollamancer, but he's focused more on accessories.

Second-in-command of Jetstone's field units, he has a minor discussion with his superior about philosophy. He's a scorist, meaning he believes units simply accumulate points that earn them placement in the afterlife, with no need to defend their actions before the Titans.

An Archer warlord in service to Jetstone, who was exiled to a distant city due to her inability to play politics. She was brought back to the capital when Gobwin Knob attacked.

Ansom's best friend and most trusted strategic advisor, though they hail from different sides. He is a powerful Warlord and a cunning and caring person. He is capable of independent flight and using Doombats for surveillance. 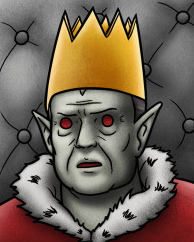 "Wolves, they made stronger than mice. Mice do not hunt wolves. That is not how the Titans created them."

The King of Transylvito. Hasn't left the capital since his inauguration tour, but can see through the eyes of bats with the help of his Thinkamancer.

Vinny's superior in the court of Transylvito, and appointed heir to the throne. 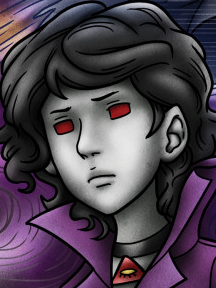 "That'll get your lip split in our neighborhood, mister."

Transylvito's Chief Caster and Moneymancer, as well as one of King Don's oldest friends. He spends much of his time glowering in the background about the money being spent.

Transylvito's newest warlord, popped only a few turns before book 4.

Bill
Transylvito's Dollamancer.
Prince Ponzie
Don King's heir, who was disbanded before the start of the story.

The Kingdom of Faq 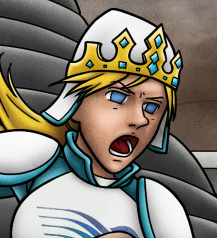 "Wanda, I think you're completely capable of wiping out every unit in this battlespace. Which is hot. But any time you talk about croaking me, you're full of crap."

The former Princess of Faq, Jillian was never the heir her father had hoped to pop, and in many ways prefers life as a barbarian. This doesn't stop her from detesting Stanley, her... interesting... relationship with his second-in-command notwithstanding.

Jillian's father and the ruler of Faq before her. He was ultimately betrayed and croaked by Wanda in order to fulfill her destiny.

The warlord of Jillian's renewed Faq.

Jillian's heir, popped at the request of Don King of Transylvito.

A face you know you can trust.
Click here to see his true face 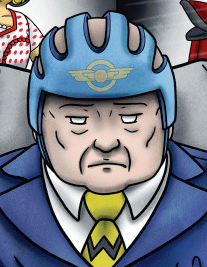 "We prefer to play games that don't even contain a losing outcome."

The ruler of a mysterious, mercenary side called Charlescomm. Charlie is one of the attuned wielders of an Arkentool. He displays extreme cunning in both tactics and diplomacy, and his services generally come at a steep price. He plays both sides of a conflict to give himself the best possible outcome.

Powerful and dangerous natural caster units in service to Charlie. Only a handful of other sides can pop Archons, and none of them as fast as Charlie. They are utterly devoted to Charlie and his ideals, engaging in the mercenary wheeling and dealing he so loves. In the first book and second books, they are allied with Jetstone and the Coalition, but play a more directly antagonistic role against Gobwin Knob in the third.

One of Charlie's highest-ranking Archons, she was designated AAA and was in charge of important aspects of Operation: Big Game. She was croaked and decrypted soon after she was introduced.

Formerly Comm Tower of Charlescomm, she was awakened into sapience by the Great Minds in a caster link. She refers to herself as a temple, however, not a tower. She treats Charlescomm units as her children.

The Overlady of Haffaton, which was the strongest side of its time.

The king of Haggar, who allies with Jetstone while planning to claim the kingdom once it falls to Stanley.

A warlord of Firstpost, imprisoned by Squashcourt while on a diplomatic mission

The King of Squashcourt, a supposedly childish king with a fondness for outlandish proclamations

An apparently taciturn and violent heir to the throne of Squashcourt.

The queen of Unaroyal, a respected side.

"'Striving for the impossible' doesn't mean 'toiling in vain.' It means growth."

Janis is one of the most influential Casters in the Magic Kingdom. Her origin is unknown, but her main motive is clear: to bring peace to Erfworld. She has revealed little about her scheming in that direction, but current information indicates that she may be running a conspiracy or two to that end. As her title implies, she's a practiced Hippiemancer, though she seems to specialize in Flower Power in particular. 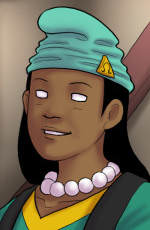 She just thought of something funny that happened tomorrow.
"Tsk. You wah supposed to be the smot one. Hate to see a dumb one."

A powerful Predictamancer with a founy accent. She was originally from Faq, but went to the Magic Kingdom after her side fell. So far, she has accurately predicted the fall of Faq and Wanda's attunement to an Arkentool, among other things. She's also the one who provided Wanda with the scroll needed to summon Parson. She is the de-facto leader of a conspiracy in the Magical Kingdom to bring peace to Erfworld and fulfil the Titans' great plan. 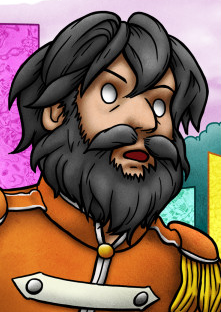 A Carnymancer formerly of Unaroyal, Jeftichew was made to pledge only to work for royal sides before being sent into the Magic Kingdom, after which Queen Bea ended Unaroyal. Little else is known about him, but he knows Janis and is the reason for Sylvia's Plot Armor. He also seems to be doing Charlie's bidding. 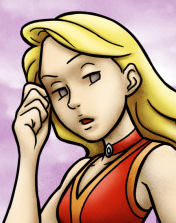 "You show me your Motion, and I'll show you mine?"

A Turnamancer formerly in service to Unaroyal, she now does work for Faq and serves as an agent of Charlescomm to avenge her former side against Gobwin Knob.

A Florist working for Haffaton, a side that existed long before the events of the main story. She serves as the Big Bad of the "Inner Peace (Through Superior Firepower)" prequels and seems to wield enormous personal authority within Haffaton.

The Great Minds That Think Alike

A club in the Magic Kingdom of the most powerful Thinkamancers in the world, who lead the other members of their discipline.