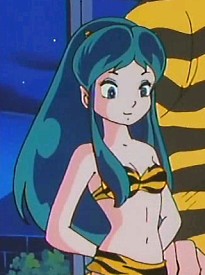 "Oh, my god! Lum is the greatest character I've ever seen in my life! She comes to invade Earth, because space is too cold, and she has just this tiny bikini to wear. She also can fly around and shoot electricity, but she's not a comic book superhero, she's part of a Romantic Comedy! Only instead of Reese Witherspoon we have Lum. And she calls her boyfriend "Darling", even though..."

Characters from Anime and Manga that are just that... totally... awesome.

got out the hospital, he returned to work, rebuilding everything that had been destroyed. He had said he didn't want to do it, especially cause he didn't want to put everyone in danger if the guy tried to attack him again, but when everyone who worked there came begging him, he couldn't say no. In Syal's backstory it mentions that due to Syal worrying about Elsa and the orphans, Zelik gave them his blood and promised to protect them. He said if he ever sold them out, or just plain sold them, he would let Syal kill him. While it's mostly a time in the story where it's hard to see his good side, it is still left in tiny hints, including Zelik promising to give Graham a discount since Graham keeps getting ripped off when buying from anyone else. In the main time for the manga, Zelik acts as an uncle to the main character, Ricalna, since he got attached watching him grow up. He is so sweet at times and is always looking out for absolutely everyone around him.