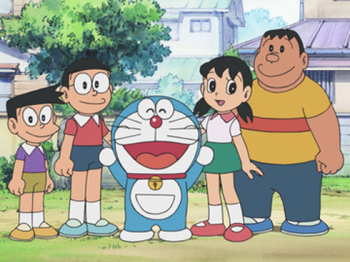 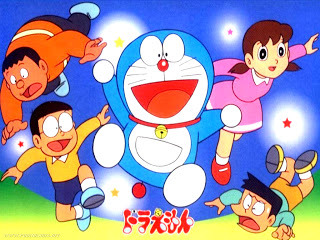 "Hey there! My name is Doraemon! I'm a super-sized, gizmo-ized, gadget cat from the future! I get sent back in time to take care of this guy, Noby, but he's a mess! And that's where I come in! To save the day with an amazing invention from my fourth-dimensional secret gadget pocket! But things never turn out as planned! Get ready, 'cause here we go again!"
— Doraemon explains the premise in the Doraemon: Gadget Cat from the Future opening
Advertisement:

Doraemon is one of the longest running anime series and the most successful work of Fujiko Fujio. The title character, Doraemon, is the quintessential example of the Robot Buddy: he is a robotic cat from the future sent back to help the socially inept Nobita Nobi through the use of futuristic technology (known as Dogu, Japanese for "tools", or gadget) produced from his Fourth Dimensional pocket. Typically, the devices are used to impress his love interest Shizuka Minamoto or humiliate the bullies Takeshi "Gian"note Referred as "Giant" in some translations Goda and Suneo Honekawa. Inevitably, there is some form of Phlebotinum Breakdown, and Nobita must sort through the root problem himself. The overused story arc is somewhat of an artefact of the series' origin during the 1970s, criticizing Japanese society's increasing over-reliance on superfluous technology.

The characters also go on epic adventures in Doraemon's Long Tales and the films based off of them. All of these stories ended up being so many in number, and just so dang popular, that Shogakugan had to make a magazine to give the manga a permanent place to stay— which ended up becoming kodomomuke manga haven CoroCoro Comic, with Doraemon himself serving as Series Mascot to this day.

After a brief and unpopular animated series in 1973 by Nippon Television, Doraemon remained fairly exclusive in manga form until 1979 when a newly formed animation studio, Shin-Ei Animation (which was eventually purchased by TV Asahi) produced an anime series of Doraemon. This series became incredibly popular and ended with 1,787 episodes on March 25, 2005. Celebrating the anniversary of the franchise, a new Doraemon series began airing on TV Asahi on April 15, 2005, with new voice actors and staff, and updated character designs.

Even though it's not really popular in certain western countries (such as the United States of America and Canada, which is significant as far as American-dominated websites like TV Tropes are concerned), Doraemon is a very influential series, particularly in the east and the non-English speaking west. For example, in 2002, Doraemon was featured along with Aung San Suu Kyi and Hamid Karzai as one of the 22 heroes featured in a special edition of Time Magazine on Asian Heroes. In a truly surreal moment, Doraemon has been designated by the Real Life Prime Minister of Japan as the Ambassador between the cartoon world and Japan, with the ceremony including a to-scale model of Doraemon.

In 2014, it was announced that Disney XD would air an English dub, licensed by Viz Media and produced by Bang Zoom! Entertainment, of Doraemon five days a week in the USA market as part of a block for elementary-aged children. And thus, Doraemon made a premiere on American televisionnote His first appearance at all was a limited screening of Doraemon: Nobita's Dinosaur 2006 after three decades of trying so. Despite achieving cult status, the dub's ratings massively declined and were put on indefinite hiatus after two seasons. Nevertheless, the American premiere of the franchise was a big deal in both Japan and the US - so much so that the edited American episodes were actually dubbed back into Japanese "as is" and aired on Japan's Disney Channel. A different English dub commissioned by LUK Internacional S.A. (who license Doraemon in Spain) - still using the American names for the characters, but with different voice actors from the US version, the original music intact and scripts closer to the originals - aired on Disney XD UK. In 2019, Disney Channel India began airing their own English dub that unfortunately wound up being short-lived.

open/close all folders
A-D
E-H
I-L
M-P
R-V
W-Z
Movies
"as long as you're here, you bring us happiness!"
— Ending line of the Japanese theme song of the 2005 anime.