One by one, the Nobles will come, only to discover the remains of those who worshiped them and paved the way for their arrival. But it is then their duty to pave the way for others. For those from the planets through the glass, whatever that means.

When John and company "scratched" their session at the end of Act 5, things changed. Their session and universe were subjected to a cosmic Reset Button, and the resulting rebooted universe wasn't quite like the old one.

Many things, both large and small, were different, presumably to enable mankind to have a better chance at winning Sburb. The most prominent change is that the original kids and their parents have switched places, and now it's the guardians-turned-kids who will tackle the new session. (In actuality, though, they're paving the way for the other kids to arrive.)

open/close all folders
The post-Scratch kids in general
Jane

Paradox Space Appearances: "Ace Sleuth Jane" | "A Fun Day for GCat" | "Secret Sufferer"
Though you guess that probably comes with the territory of being the HEIRESS APPARENT TO A BAKED GOODS EMPIRE. You don't suppose it hurts that you are said empire's NUMBER ONE FANGIRL, either! It should come as no surprise that you enjoy BAKING, but you also adore reading DETECTIVE STORIES. You fancy yourself a SKILLED PRANKSTRESS, if by no other measure than lineage. Though at times you feel it's tough to fill those shoes when you are SURROUNDED BY JOKERS. Seriously, the shenanigans perpetrated by your pals make your old school japes feel KIND OF PEDESTRIAN SOMETIMES, but oh well, you love them all anyway.

The post-Scratch iteration of Nanna Egbert, and John's post-Scratch counterpart, Jane is the heiress to the great Betty Crocker empire and the comedic legacy of her forefathers.

Her chumhandle is gutsyGumshoe. She is the Maid of Life of the Post-Scratch Human Session and is the leader of said session.

Her fetch modus is RECIPE, which allows her to view all the possible Alchemization combinations allowed to create the items she puts in it, as well as the grist cost for each combination, and her STRIFE SPECIBUS is allocated to the SPOONKIND ABSTRATUS, which can switch to the FORKKIND ABSTRATUS.

She speaks with proper grammar and capitalization, and uses a spot of old lingo.
HOWEVER, SHE USES ALL CAPS AND MULTIPLE EXCLAMATION MARKS WHEN EXCITED OR INFURIATED!!!
She also likes using bucktoothed emotes! :B
And she has a distinctive laugh. Hoo hoo!
Advertisement:
Roxy 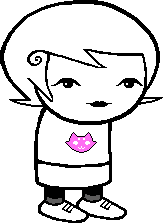 You wish and hope they are REAL, and that so too is their MAJYYKS AND STUFF. You enjoy writing FANPROSE FOR SAID MAGICAL MEN, but you think maybe it's NOT SO GREAT. You are however QUITE GREAT at the esoteric sciences, such as ECTOBIOLOGY, DARK FENESTROLOGY, and the delicate art of APPEARIFICATION. You have tended to accrue dead preserved SPECIMENS from your experiments, little to none of which AREN'T FELINE.

Her chumhandle is tipsyGnostalgic. She is the Rogue of Void of the Post-Scratch Human Session.

she types with no punctuation except for EMPHASIS or to make a point???
swears all the goddamn time and uses netspeak like lmao a lot
makes a lot of typosp when durnk and sometimes uses * to correct hreslef
* herself
Dirk 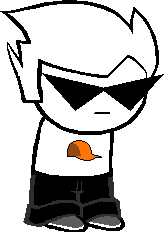 "If you weren't so DAMN ALOOF and actually let people GET A LOAD, you might get described all kindsa ways. Maybe tagged as a RENAISSANCE NINJA, PHILOSOPHER PRINCE, and FLASHSTEP PUPPETEER. Or perhaps a PANTHEONIC IRONICIST, GANGSTA LOGICIAN, LUCID WAKER and DERSITE SPY. Screw descriptors though, as if the shits you give ain't nil. You're cool with dabbling in the FINE SEQUENTIAL ARTS, and your work could be viewed by some as BORDERLINE PORNOGRAPHIC. And to those philistines you'll be heard wondering, what the fuck do you mean BORDERLINE?

The post-Scratch iteration of Bro Strider, and Dave's post-Scratch counterpart. He is a stoic and intelligent Polymath who looks out for his friends and builds robots...which then he proceeds to demolish in death matches. He also loves puppets and horses.

His chumhandle is timaeusTestified. He is the Prince of Heart of the Post-Scratch Human Session.

His STRIFE PORTFOLIO contains SPECIBI for BLADEKIND, which he considers his main SPECIBUS, and two Joke Weapons; PUPPETKIND, and FNCYSNTAKINDnote Fancysantakind—which is also a Call-Back to Problem Sleuth and a Running Gag. His fetch modus is TECH-HOP, a Mythology Gag to And It Don't Stop

◊. It's fairly complicated but is the best modus for hashrap enthusiasts.

Speaks with proper grammar, capitalization, and punctuation,
Except for when he breaks a sentence into two lines.
Is prone to very verbose and formal remarks, including sarcasm and extended metaphors.
Doesn't use emoticons. Sometimes uses Bro puns, such as Brobot or Brocurement.
Jake

Paradox Space Appearances: "Antiquated Japesterism" | "Secret Sufferer"
Not a gent of your PANACHE AND SWAGGER, qualities which you would BANDY WITH APLOMB on your globe-spanning adventures, HYPOTHETICALLY SPEAKING. You would love to travel around the world, toppling any SACRED URNS you encountered. You'd be tickled by the opportunity to defile HALLOWED TOMBS everywhere, raiding them of their treasures. And how you'd give your RIGHT LEG for a shot at desecrating THE SHIT out of some real life MYSTIC RUINS for their byzantine wares. Luckily for your limb, there is a dandy set of such ruins nearby, and you desecrate them quite frequently!

The post-Scratch incarnation of Grandpa Harley, and Jade's Post-Scratch counterpart. He is Jade's penpal, communicating with her across the two Earth universes, and he assisted in the creation of the cyborg bunny and provided its weapons.

His chumhandle is golgothasTerror. He is the Page of Hope of the post-Scratch Human Session.

His STRIFE SPECIBUS is allocated to the 2X PISTOLKIND ABSTRATUS. His fetch modus is PUZZLE, which can hold a truly absurd number of items as long as the pieces fit.

He starts with capitals and ends with punctuation but thats all he does!
He uses a mix of archaic slang and indubitably motherfucking virile profanity.
WHEN HE GETS ANGRY THOUGH IT IS A DADBLASTED FRIGGIN SIGHT TO BEHOLD! ALL HIS WORDS ARE RENDERED IN CAPS, AND EXCLAMATION POINTS ABOUND!!!!
He also sometimes uses role playing emotes like this. *adjusts glasses knowingly*
> Go Back
> Return to main page