Disciple
Paradox Space Appearances: "Headed for Stardom" | "Hunting Lesson" | "A Friend in Need" | "The Mortician" | "Secret Sufferer" | "Relation Shipping" | "Summerteen Romance"
You live in a CAVE that is also a HIVE, but still mostly just a CAVE. You like to engage in FRIENDLY ROLE PLAYING, but not the DANGEROUS KIND. Never the DANGEROUS KIND. It's TOO DANGEROUS! Too many of your good friends have gotten hurt that way. Your daily routine is dangerous enough as it is. You prowl the wilderness for GREAT BEASTS, and stalk them and take them down with nothing but your SHARP CLAWS AND TEETH! You take them back to your cave and EAT THEM, and from time to time, WEAR THEIR PELTS FOR FUN. You like to paint WALL COMICS using blood and soot and ash, depicting EXCITING TALES FROM THE HUNT! And other goofy stories about you and your numerous pals.

A cave-dwelling troll with an immense love of and fascination with the art of shipping, who maintains an extensive Shipping Wall. 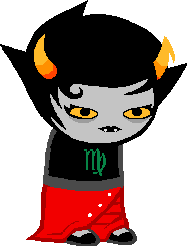 Fruitful
Paradox Space Appearances: "Her Pale Passions" | "Soul-Fraying Games" | "Lalondian Tourism" | "Garbage Day" | "A Friend in Need" | "The Mortician" | "Secret Sufferer" | "Lady Grimme and the Red Knight" | "Three out of Five Hats" | "Steward of Void" | "Summerteen Romance"
You are one of the few of your kind who can withstand the BLISTERING ALTERNIAN SUN, and perhaps the only who enjoys the feel of its rays. As such, you are one of the few of your kind who has taken a shining to LANDSCAPING. You have cultivated a lush oasis around your hive, and in particular, you have honed your craft through the art of TOPIARY, sculpting your trees to match the PUFFY ORACLES from your dreams. You have embraced the tool of this trade, which conveniently is the weapon of choice for those who would hunt the HEINOUS BROODS OF THE UNDEAD which crawl from the sand at sunrise to feast on the light and the living.

An unusual troll with a love of gardening and fashion, who lives in a hive and surrounding area eerily similar to that of Jade.

She has allocated her STRIFE SPECIBUS with the MAKEUPKIND ABSTRATUS. This means she's armed with a chainsaw.

Watcher
Paradox Space Appearances: "John's Birthday" | "Con Faire" | "Indemnity Double Reacharound" | "Night at the 100dseum" | "Soul-Fraying Games" | "Lalondian Tourism" | "Garbage Day" | "The Mortician" | "Secret Sufferer" | "Relation Shipping" | "Summerteen Romance"
You take an interest in justice, holding particular fascination for ORCHESTRATING THE DEMISE OF THE WICKED. You have taken up study of BRUTAL ALTERNIAN LAW, and surround yourself with legal books. You have no need for copies printed in TROLLBRAILLE, because you can SMELL AND TASTE THE WORDS. You hope one day to join the honorable ranks of the LEGISLACERATORS.

A blind troll law student who delights in being weird and messing with people; the only troll who is actually effective at trolling, she supplies the kids with hints on how to get ahead in Sburb, sometimes helpful, sometimes not.

She is the Seer of Mind. Her trolltag is "gallowsCalibrator".

Conqueror
Paradox Space Appearances: "Con Faire" | "Critical Miss" | "Secret Sufferer" | "Relation Shipping" | "Summerteen Romance" | "Vrisky Business"
You are a master of EXTREME ROLE PLAYING. You can't get enough of it, or really any game of high stakes and chance. You have persisted with the habit even in spite of your ACCIDENT. But then again, you don't have much choice. You are something of an APOCALYPSE BUFF, which is something you can be on Alternia. You are fascinated by end of the world scenarios, and enjoy constructing DOOMSDAY DEVICES for the hell of it. You are drawn to means of DARK PROGNOSTICATION and the advantages they offer, particularly in gaming scenarios. Your abilities in this department were hobbled with the loss of your VISION EIGHTFOLD, and you have since sought alternatives through various BLACK ORACLES. You consult with these ominous globes, but routinely destroy them in frustration over the PUZZLING GUARANTEED INACCURACY of their predictions. Breaking them has developed into a habit BORDERING ON FETISHISTIC, and with each you destroy, you add to an insurmountable stockpile of TERRIBLE LUCK. You have to stop. But addiction is a powerful thing.

A troll with a love of games of all kinds, particularly live-action roleplay and gambling, to such a sociopathic extreme that few trolls trust her.

For a brief period of time later in the story she became Jane's sprite, along with Tavros. Came Back Wrong applies heavily here. See that character's section for tropes pertaining to it.