During the course of a session, five Carapacians, Dersite or Prospitian, will be exiled by being sent through a Skaian portal. They land on the barren home of the players, and together rebuild a new society, while advising the players of the session via terminals that grew out of the meteors that destroyed the player's homes.

There are three known groups of Exiles: the desert wanderers of Pre-Scratch Earth, the violent gangsters of the Midnight Crew who advised the Troll Session, and the starving Dersites who pester Roxy on Post-Scratch Earth.

All Exiles are an example of:

open/close all folders
The Wanderers/Pre-Scratch Exiles

The Pre-Scratch Exiles are examples of

Years in the future, but not many, a WAYWARD VAGABOND records a stuttering step in the sun-bleached dust.

Exiled to the ruined Earth during the Reckoning, he plants suggestions in John's head using a mysterious terminal he finds in a bunker in a desert where Rose's house used to be. Prior to his exile, he was a simple WARWEARY VILLEIN attempting to eke out a living as a farmer on the battlefields of Skaia. He incited a revolution against the Black King, fulfilling his role as a game concept, but his army was slaughtered by Jack Noir. The fourth playable character introduced.

Minutes in the future, though perhaps not as few as implied by circumstance, a PEREGRINE MENDICANT trundles precious cargo beneath the gleam of the celestially ominous.

Like the Wayward Vagabond, a wandering soul living in the future who, while wheeling around a collection of mailboxes, stumbles across a Sburb capsule. Prior to the Reckoning, she was a simple PARCEL MISTRESS on a quest to deliver a very important package. The sixth playable character.

Years in the future, which is to say, THE PRESENT MOMENT PRECISELY, an AIMLESS RENEGADE prepares for company.

The third future wanderer, who is investigating the Frog Temple and is covered in yellow police tape. Prior to his exile, he was an AUTHORITY REGULATOR tasked with the enforcement of the law in the kingdom of Derse. The eighth playable character.

The fourth exile, who suddenly appeared out of an egg-shaped Sburbcraft. Communicated with Rose through her Sburb device. Prior to her exile, she was the WHITE QUEEN, adored sovereign of Prospit, who abdicated her throne in order to help PM on her quest. After PM becomes the Prospitian Monarch, she is appointed as her royal adviser. 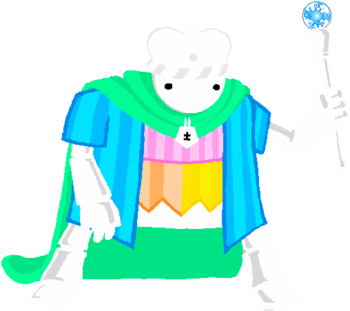 Soon the WRIT KEEPER will awaken and serve his new queen. It is then that her work may begin.

The former King of Prospit, who hid inside the time capsule in the Frog Temple to survive and become the Writ Keeper on the future Earth.

Sure are a lot of them today. They must be getting more desperate.

A bunch of "Exiles" taken from the Post-Scratch Session by the Condesce, to form the backbone of her new empire. They mostly live on floating cities that resemble chessboards, and according to Dirk they're essentially slums. Roxy lives in one of these cities, and was raised by them. On occasion some of the Carapacians sneak into her lab to hunt her cats. None of them have names or distinct appearances, with exception to one who led a hunting party into Roxy's lab, who is still nameless.

The Midnight Crew were originally non-canonical characters from Problem Sleuth, wherein they were Team Sleuth's Psycho Ranger counterparts, waging grand warfare against the protagonists through donation-funded commands. In the Homestuck universe, they were apparently so popular that the MS Paint Adventures site that the characters visit features a Midnight Crew adventure as the followup to Problem Sleuth, something which Andrew Hussie apparently considered in real life after abandoning the all-Flash version of Homestuck.

The Midnight Crew featured in an intermission between Acts 3 and 4 of Homestuck, wherein they invaded the mansion home of their rival gang The Felt with the aim of ending their gang war once and for all. They later out to be part of the Homestuck canon after all, existing in the distant post-apocalyptic future of Alternia (612 Alternian years in the future, to be exact) in much the same capacity as Earth's exiles, taking Mutually Fictional to Up to Eleven levels. 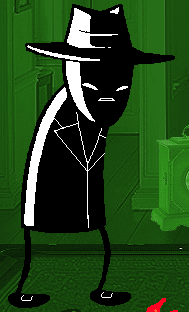 Your name is SPADES SLICK. You are the leader of a notoriously vicious gang of mobsters called the MIDNIGHT CREW. A rival gang known as THE FELT recently knocked over one of your favorite casinos. Your long quest of revenge has finally taken you through the front door of the mansion belonging to their loathsome boss, LORD ENGLISH.

The leader of the Midnight Crew. Armed, dangerous, and extremely violent. He and Diamonds Droog are probably the smartest members of the crew. Notably, Spades "made this town what it is." "Wasn't nothing but a bunch of dust and rocks before [he] got here." Long before the Midnight Crew, he was the Jack Noir present in the trolls' session, who allied with the trolls to overthrow and exile the Black Queen but was exiled himself in revenge. He wandered the post-apocalyptic Alternian desert for years as the Scurrilous Straggler before founding the Midnight Crew and returning civilization to the planet.

Though it seemed he died in the destruction of the Troll Universe, Andrew Hussie (in comic that is) swooped in and saved him. He was badly hurt and had to be turned into a cyborg 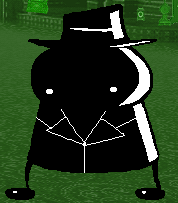 Everybody out of the god damn way. You got a hat full of bomb, a fist full of penis, and a head full of empty. 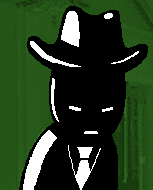 You suddenly remember you are Diamonds Droog. Whoever took your hat is about to discover he's the unluckiest man on earth. He better hope you find him dead. What you're gonna do to him will be much less painful that way. 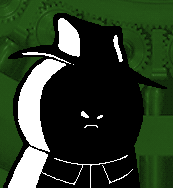 You stop not being Hearts Boxcars. You have made your way to the Felt's SECRET VAULT. It's bigger than you were expecting. You doubt you will be able to rely on your usual safe-cracking method, which is prying it from the wall with your bare hands. You'll have to think of something else.

Although not a member of the Midnight Crew, she is the fifth Exile of the Troll Session. See her own section for more details.
> Go Back
> Return to main page