Engineer
Paradox Space Appearances: "Headed for Stardom" | "John's Birthday" | "Hunting Lesson" | "Killswitch ENGAGED" | "Night at the 100dseum" | "Secret Sufferer" | "Steward of Void" | "Relation Shipping" | "Summerteen Romance" | "Vrisky Business"
You love being STRONG. You are so strong, you would surely be the class of the elite legion of RUFFIANNIHILATORS. And while such a calling would be quite honorable, you would prefer to join the ranks of the ARCHERADICATORS, perhaps the most noble echelon the imperial forces have to offer. Unfortunately, you SUCK AT ARCHERY. You have not successfully fired a SINGLE ARROW. Every time you try, you BREAK THE BOW. You are simply too strong. You have broken so many bows, it has developed into a habit BORDERING ON FETISHISTIC. You have to stop. But addiction is a powerful thing.

A traditionalist troll who staunchly believes in upholding the noble customs and beliefs attributed to his blood color.

Capricious
Paradox Space Appearances: "John's Birthday" | "Headed for Stardom" | "Hospitality" | "Secret Sufferer" | "Spritecon" | "Summerteen Romance"
You get pretty excited by CLOWNS OF A GRIM PERSUASION WHICH MAY NOT BE IN FULL POSSESSION OF THEIR MENTAL FACULTIES. You belong to a RATHER OBSCURE CULT, which foretells of a BAND OF ROWDY AND CAPRICIOUS MINSTRELS which will rise one day on a MYTHICAL PARADISE PLANET that does not exist yet. The beliefs of this cult are SOMEWHAT FROWNED UPON by those dwelling in more common lawnrings. But you don't care, you got to be going with what feels right at where your heart's up in, you know?

A rather spacy troll, perpetually high on sopor slime, who holds a deep and spiritual awe for all life's miracles, great and small. 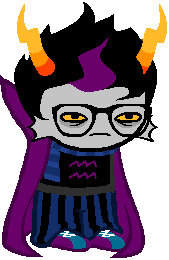 Zealous
Paradox Space Appearances: "Headed for Stardom" | "Critical Miss" | "Hospitality" | "Secret Sufferer" | "Relation Shipping" | "Summerteen Romance"
You have an overpowering GENOCIDE COMPLEX, and have made it your sworn duty to KILL ALL LAND DWELLERS. You have amassed resources and deadly weaponry from around the world for this ambition through many sweeps of EXTREME ROLE PLAYING, while pursuing a working DOOMSDAY DEVICE which will bring armageddon to all those on the surface. Haven't had much luck with that, but maybe tonight's your night.

A noble of the troll Nautical Aristocracy with a borderline-genocidal distaste for land dwellers which he's perfectly willing to overlook should it serve his purposes. 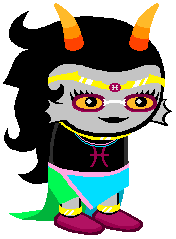 Cleric
Paradox Space Appearances: "Headed for Stardom" | "A Friend In Need" | "Secret Sufferer" | "Star of the Ocean" | "Spritecon" | "Relation Shipping" | "Summerteen Romance"
You would redefine what it means to be CULLED in troll society. Under your rule it would mean caring for the unfit and infirm rather than exterminating them, and you have put this idea into practice by CULLING THE FAUNA OF THE DEEP. You tend to wild and beautiful AQUATIC HOOFBEASTS, grooming and feeding them daily. You capture and cage CUTTLEFISH by the thousands for their own good, and also because they are funny and colorful and you love them. They often swim through the bars of their cages, but that is fine. You run your whole palace as a sort of WILDLIFE ADOPTION FACILITY, even if the wildlife's need for care is dubious at best, and the practice really just amounts to an elaborate ROLE PLAYING SCENARIO. It's still fun though.

The sea-dwelling heiress apparent to the throne of the Alternian Empire, she is determined to one day make a better life for trollkind.