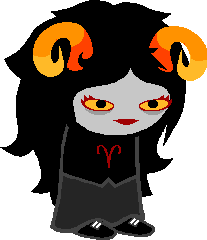 Excavator
Paradox Space Appearances: "A Friend In Need" | "Secret Sufferer" | "Star of the Ocean" | "Spritecon" | "Relation Shipping" | "Summerteen Romance"
You once had a number of INTERESTS, which in time you have LOST INTEREST IN. You seem to recollect once having a fondness for ARCHEOLOGY, though now have trouble recalling this passion. It nonetheless has led you to find your PRESENT CALLING, which came through the discovery of these MYSTIC RUINS on which you presently stand, and which you recently DESECRATED OUT OF BOREDOM.

A rather spooky female troll who organized the Troll session. Before the beginning of the story, she was murdered by Vriska, by means of a mind-controlled Sollux. However, prototyping her Kernelsprite with the head of a frog statue and her own ghost brought her back to life.

In life, she allocated her STRIFE SPECIBUS to WHIPKIND, quite like the human Indiana Jones. In death, she mostly relies on telekinesis to fight enemies.

When God Tier Aradia and a memory Aradiabot were in the same log, the Aradiabot used her old typing quirk and Equius' color to distinguish herself. The Aradiabot quickly abandoned the typing quirk, but kept the color.

Unfledged
Paradox Space Appearances: "Headed for Stardom" | "Secret Sufferer" | "Relation Shipping" | "Summerteen Romance"
You are known to be heavily arrested by FAIRY TALES AND FANTASY STORIES. You have an acute ability to COMMUNE WITH THE MANY CREATURES OF ALTERNIA, a skill you have utilized to CAPTURE AND TRAIN a great many. They are all your friends, as well as your warriors, which you pit in battle through a variety of related CARD AND ROLE PLAYING GAMES. You used to engage in various forms of MORE EXTREME ROLEPLAYING with some of your other friends before you had an accident.

A rather awkward troll with huge horns who is paralyzed from the waist down; he has a childish disposition and upbeat personality regardless.

For a brief period of time later in the story he became Jane's sprite, along with Vriska. Came Back Wrong applies heavily here. See that character's section for tropes applying to it.

Cynic
Paradox Space Appearances: "Killswitch ENGAGED" | "Secret Sufferer" | "Spritecon" | "Summerteen Romance"
You are apeshit bananas at computers, and you know ALL THE CODES. All of them. You are the unchallenged authority on APICULTURE NETWORKING. And though all your friends recognize your unparalleled achievements as a TOTALLY SICK HACKER, you feel like you could be better. It's one of a number of things you SORT OF BEAT YOURSELF UP ABOUT for NO VERY GOOD REASON during sporadic and debilitating BIPOLAR MOOD SWINGS. You have a penchant for BIFURCATION, in logic and in life. Your mutant mind is hounded by the psychic screams of the IMMINENTLY DECEASED.

A moody troll afflicted with bipolar mood swings with an incredible knack for hacking.

He has not allocated his STRIFE SPECIBUS with any KIND ABSTRATUS as, after all, a high-level psionic has no need for weapons.

Signless
Paradox Space Appearances: "John's Birthday" | "Con Faire" | "Her Pale Passions" | "Night at the 100dseum" | "Soul-Fraying Games" | "Garbage Day" | "The Mortician" | "Secret Sufferer" | "Three out of Five Hats" | "Spritecon" | "Summerteen Romance"
You have a passion for RIDICULOUSLY TERRIBLE ROMANTIC MOVIES AND ROMCOMS. You should really be EMBARRASSED for liking this DREADFUL CINEMA, but for some reason you are not. You like to program computers, but you are NOTORIOUSLY PRETTY AWFUL AT IT. Your programs invariably damage the machines on which they are executed, which is just as well, since you like to believe you specialize in COMPUTER VIRUSES. When you mature, you aspire to join the ranks of the most lethal members of your society, the THRESHECUTIONERS.

An ambitious, misanthropic young troll who is almost always angry at everyone, most especially at himself.

He is the Knight of Blood and is the leader of the Troll Session. His trolltag is "carcinoGeneticist".

He has allocated his STRIFE SPECIBUS with the SICKLEKIND ABSTRATUS. He was the first troll to be introduced, both visually and over Pesterchum, and is the "main" Troll protagonist.