The agents of Derse and Prospit and the royalty of those planets.

For the troll universe's version of Jack Noir, Draconian Dignitary, Courtyard Droll, Hegemonic Brute, see the Midnight Crew section in the Exiles pages. For their version of the Black Queen, see Snowman of the Felt.

For other notable Prospitan and Dersite characters, including post-Exile versions of the White Queen and White King, see the Exiles. 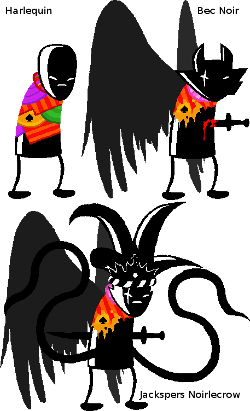 The three forms of Jack Noir note The wings are not naturally grey, but are lightened to show black on black details.
The Archagent of the Dark Kingdom of Derse, he watches events from his CUBICLE OF VIGILANCE. Within the game, he functions as a non-standard way to get rid of the Black Queen, and should players collaborate with him, they can avoid a tough fight at the end of the game, though they should also be cautious that he doesn't turn on them.

The trolls' iteration went on to become Spades Slick, leader of the Midnight Crew, after helping the Prospitian trolls exile the Black Queen. The post-scratch iteration also has his own subsection below.

The pre-scratch version was humiliated by the Black Queen by a succession of increasingly humiliating dress code changes. It didn't end well for her. Or for anyone else, for that matter.

All Iterations of Jack Noir

This time, he's taking a slightly more direct approach in fueling the Prospit-Derse war. He is subsequently incarcerated for his actions, until he gets a little something from a clown that makes him re-evaluate his situation.

Like post-scratch Jack, he assasinates Prospitians. He strikes a deal with Caliborn to kill Calliope.
Draconian Dignitary

An Agent of Derse, and considerably smarter and calmer than his superior Jack Noir. Best described by Dave as a "pretty cold blooded dude", he actually gets things done without being a raging homicidal maniac by employing stealth and actually thinking things through. He was directly responsible for creating Becquerel (at Vriska's suggestion) and thus contributed to Jack's rise to power. Later, he takes over the day-to-day operations of Derse while Jack is off killing everyone, and his nagging is pretty much the only thing keeping Jack from flipping his shit and completely destroying the Incipisphere. 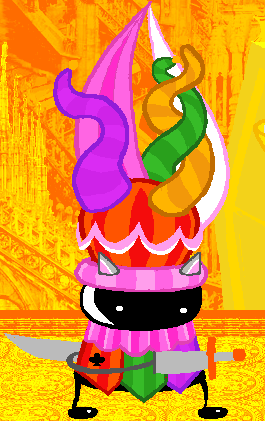 An Agent of Derse, in the service of Jack Noir. He tries to do important tasks involving stealth and theft, but he's not really all that good at what he does. 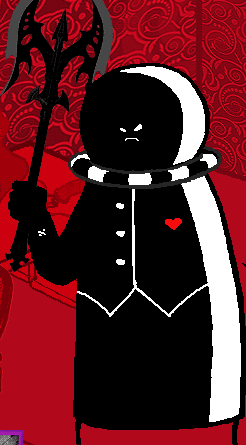 An Agent of Derse, reportedly one of the largest and strongest Agents the kingdom has.

The Troll's iteration went on to become Hearts Boxcars. In the kids' universe, both the pre-scratch and post-scratch iterations were unceremoniously killed off.

The Queen of Derse. She possesses a Ring of Power which changes her form to apply the prototyped aspects of the players' sprites when they enter the Medium. While her husband wages the war on the Battlefield, she's perfectly content to just sit around and harass the shit out of Jack Noir.

The Troll's version became the member of the Felt known as Snowman, and her tropes can be found here. The tropes here apply to the pre-scratch session's iteration, and the final iteration in the post-scratch session was replaced by a stronger Queen, who presumably killed her.

The Cherub session Black Queen served as the second to last boss of the conqueror path. Given what we know about Caliborn's rise to power, she's likely been killed offscreen.

The Queen of Prospit. She possesses a Ring of Power which changes her form to apply the prototyped aspects of the players' sprites when they enter the Medium. She's always a long-term planner, willing to concede defeat or sacrifice herself for the long-term goal. The kid's version abdicates the throne in order to aid PM?'s quest to deliver Jade's package. 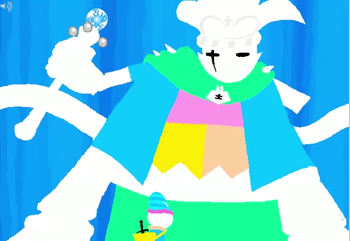 The King of Prospit, who wages war against Derse on the Battlefield at the heart of Skaia. He wields a scepter which confers upon him increased size and the prototyped aspects of the players' sprites when they enter the medium; the army of Derse seeks this scepter and, when captured, will use it to start the Reckoning, leaving the players just twenty-four hours to defeat the Black King, stop the Reckoning and win the game. The version from the kids' session later hides inside the time capsule in the Frog Temple to survive and become the Writ Keeper on the future Earth.
Black King 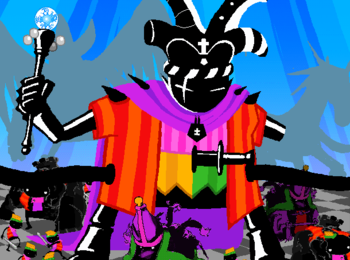 The King of Derse, who wages war against Prospit on the Battlefield at the heart of Skaia. He wields a scepter which confers upon him increased size and the prototyped aspects of the players' sprites when they enter the medium. Claiming this scepter is required to end the Reckoning after it starts and to win the game.
> Go Back
> Return to main page