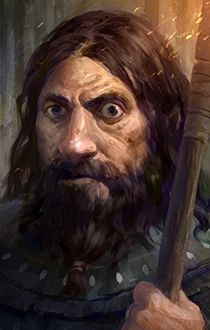 "Have you seen a man branded by flame? He remembers it always — in every waking moment. It is a lesson writ in the only ink and vellum that matters — blood and flesh."
Voiced by: Dave B. Mitchell

A human priest of Magran, Durance preaches the word of Magran to any who pass by Magran's Fork, complete with a flaming statue. Upon meeting the Watcher, he takes a particular interest in them, and more or less dragoons himself into your party to follow you around and "test" you and your worthiness. Beneath his very embittered, gruff exterior, however, it seems he might have somewhat deeper reasons for following you... 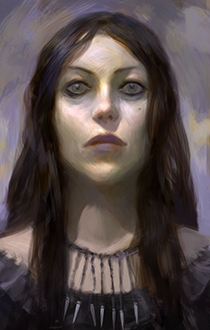 "You saw me where I hid. Whoever's hands have stilled the world... you shall see them, too."
Voiced by: Tara Platt

A human cipher. Formerly a midwife at the Birthing Bell, she's devoted her life and cipher powers to ending the Hollowborn curse by any means necessary. 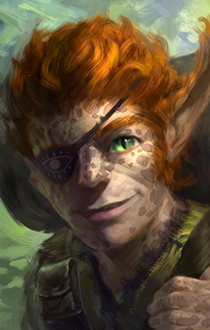 "Wael does not unravel, but he helps guide you to the path of learning for yourself. If he gave us answers, the resulting knowledge would be without value. And just once I'd like to meet a woman who goes into heat at the first whiff of stelgaer urine, but that's not going to happen either."

An orlan druid following Wael, he joins up with the Watcher in Stormwall Gorge so he has a group to travel with to visit the druids in Twin Elms. 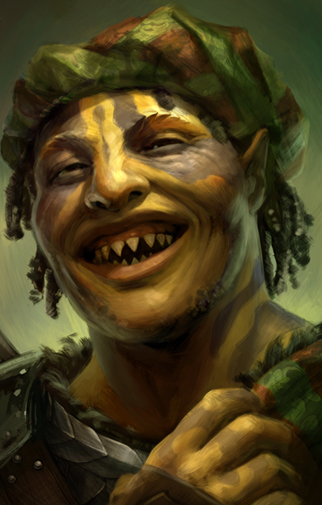 "There is a wealth of knowledge just within the walls of the college. And beyond it, more than I could learn in ten lifetimes. But I can try, all the same."
Voiced by: Patrick Seitz

An aumaua chanter hailing from Rautai, Kana Rua can first be encountered among the ruins of Caed Nua. Far away from home, he has embarked on a quest to recover a most sacred book revered among chanters, the Tanvii ora Toha, or Book of Virtues. Seeing as the Watcher is going to explore the ruins as well, he happily tags along. 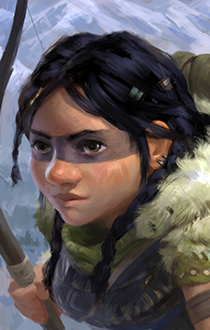 "Short version? I'm looking for a very, very old friend. I'm not sure what skin he's wearing now, but I'll know him when I see him."
Voiced by: Cindy Robinson

A boreal dwarf ranger, the Watcher encounters her, along with her companion Itumaak, on the crossroads into Defiance Bay. She is searching for the reincarnation of her Village Elder, Persoq, to tell his soul how the tribe is coming along. The journey has taken her five years, and she has grown despondent over time. When she the Watcher's abilities though, she finds herself tagging along so that she can finally finish her quest. 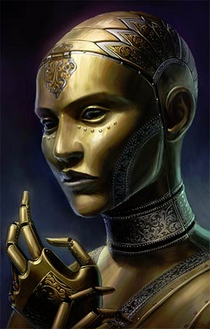 "Murder, tracking, and the best materials for kindling – those are more my area of expertise."

A construct rogue, the Devil of Caroc was once a villager in Cold Morn who sought revenge for her fellow villagers who were murdered during the Eothasian Purges. She was eventually caught and executed, but her soul was powerful enough not to pass on and now resides in a bronze golem. 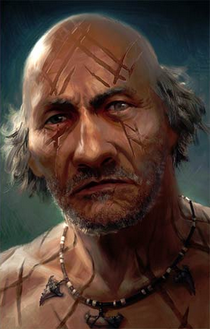 "A scar is a wound that heals. A living reminder of our power over suffering. They cause no pain, only the echo of pain which cannot hurt you. Show me a scarred man and I will show you a man who can overcome."
Voiced by: Jamieson Price

A human Monk, Zahua is the greatest of the Nalpazca, the warrior-monks that serve as the army of the Tacan people. The Nalpazca seek to distinguish between the physical and imaginary world. Zahua seeks to pursue to ideals of the Nalpazca in the hopes that it will make him become an unstoppable combatant. 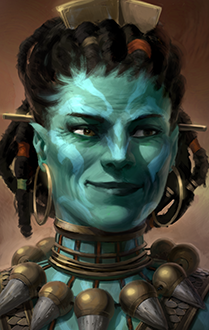 An aumaua barbarian who, like Kana, originally hails from Rautai. Unlike Kana, however, Maneha is quite the experienced traveler who has seen much of the world and been through a lot. A member of the Giftbearer order, she is currently searching for the mysterious Abbey of the Fallen Moon; a hunt that causes her to cross paths with the Watcher in Stalwart Village. 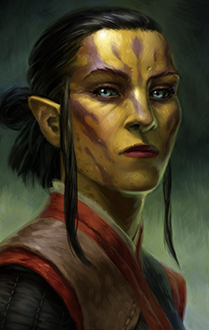 "Captain, I just wanted to say I enjoy these little moments where we negotiate with things that can eat us."
Voiced by: Marisha Ray

Maia Rua is an island aumaua ranger whose animal companion, Ishiza, is a bird of prey that can scout outdoor environments both in and out of combat. Like Kana, her brother, she's a loyal Rauataian of Huana ancestry. Her boldness and dedication have earned her an enviable position as a ship captain, which in turn has brought her to Deadfire as part of her country's mission to "civilize" the wild archipelago. 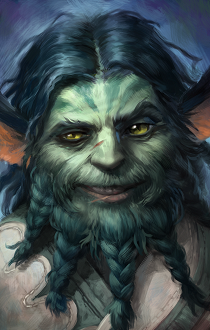 "You been at sea a while, your mind starts playing tricks on you, aye? Well, mine plays tricks on others, too."
Voiced by: Liam O'Brien

Serafen is an orlan cipher/barbarian and a member of the Príncipi sen Patrena, the dominant pirate organization in the region. He was born into slavery and put to work as a rigger and powder monkey since his small size made him ideal for scurrying around ships. During those years, he discovered his talents as a cipher and used them to lure his masters' ship into the path of the Príncipi. Impressed, the pirates offered him a position as one of their infamous "ship hunters", and he in turn found acceptance and freedom among his new comrades. He worries, however, that the growing schism in the Príncipi will destroy the community he has come to love. 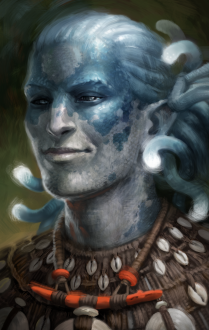 Tekēhu is the 7th and final companion, a aumaua marine godlike chanter/druid. He is one of the Huana, the native people of Deadfire and is a master of manipulating water for art. 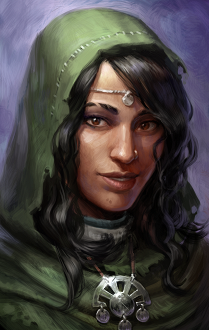 "This here's a final call for all souls! Last stop for the lost! Gather around now — I'll cut you loose and haul you into the light."
Voiced by: Laura Bailey

A savannah/meadow folk priest/monk and member of the children of the Dawnstars. When Xoti was a young girl, she was one of thousands of Readcerans who came to Deadfire fleeing the devastation that followed the vorlas blight and the Saint's War. Her family, like many others, established themselves as farmers, and she fell in love with the lush jungles and bright beaches of her adopted homeland. She is intrigued by the rumors of Eothas' manifestation, but she fears what that will mean for her fellow expatriates, many of whom followed his previous incarnation into war and defeat. 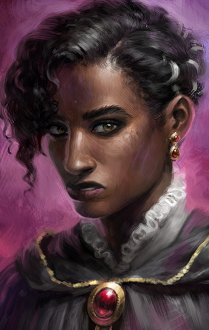 "Madiccho. I fought so hard to get here, but I won't miss a splinter of this place."
Voiced by: Julia Innocenti

An ocean folk wizard (who may multiclass as a chanter or druid), originally from the Vailian Republics, and the severely disgruntled apprentice of the legendary wizard Arkemyr, currently relegated to keeping the storefront of the Dark Cupboard, his magic shop in Neketaka. 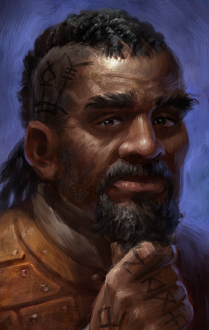 "The voice tricks people. They hear power in it, want to follow."
Voiced by: Bentley Kalu

A mountain dwarf chanter/barbarian working as a masseur at the Wild Mare in Nekataka, bored of his job and craving excitement. 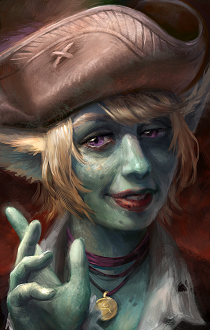 "Drink up, tars! To our better friendship!"
Voiced by: Bethanie Monroe

A perpetually-soused orlan raider, Mirke is wary of the growing factionalism in the Principi, and decides to join the Watcher's crew to get out from under it. She's a monk who can be dual-classed as either a fighter or a rogue. Turned into a sidekick after the initial release as part of the free Rum Runner DLC. 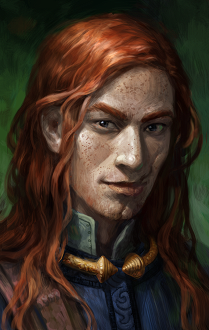 A warrior from across the sea, he does not speak any language known in the Eastern Reach or the Archipelago. He's one of the storm folk, a race of humans never before seen. His multiclass options are fighter, fighter/monk (brawler), and fighter/barbarian (brute). 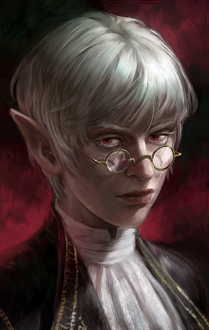 "I'd not experiment upon myself without relative certainty it would be a success."
Voiced by: Ashley Johnson

Ydwin is a pale elf fampyr mindstalker (rogue/cipher) with extensive training as an animancer. She was born in a remote, lawless settlement in the White that Wends, where she witnessed the cruelest extremes of both kith and nature. Her observations fueled a fascination with animancy, and she eventually made her way to the Vailian Republics to study. She's since become an accomplished master in the field, and advances with luminous adra in the Deadfire have drawn her to the archipelago. Originally a potential 8th companion, Ydwin is one of the potential recruitable sidekicks in Deadfire.

The Beast of Winter Sidekicks 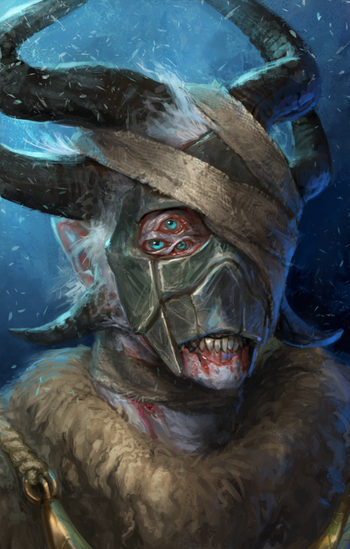 An endings godlike and priest of Rymrgand, and leader of the Harbingers of the Dusk. Vatnir was born to Glamfellen (pale elf) parents in the White that Wends, and grew up knowing it was his duty to shepherd and safeguard the clans. Now the High Harbinger, his small congregation encamped among the drifting icebergs known as the Dead Floe, he sends the Watcher an invitation to come feast with the Harbingers believe to be the Duskspeaker who will usher in the end of the world. First appears in The Beast of Winter. 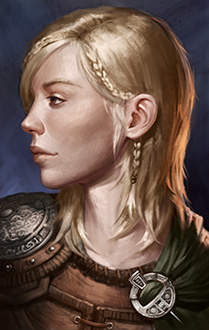 A mercenary originally from the Dyrwood who has been hired on as a guide and guard for the caravan the Watcher is travelling with in the intro. She is headed to Gilded Vale out of worry for the safety of her sister, Aufra, who is a resident of the village. 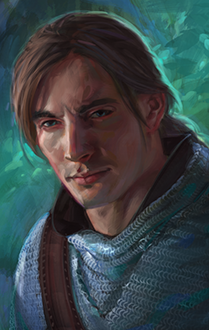 A merchant from the the Aedyr Empire who is travelling with the same caravan as the Watcher in the intro. Heodan has left home in the hopes of helping to expand his family's mercantile enterprise, which has been taken over by his brothers. 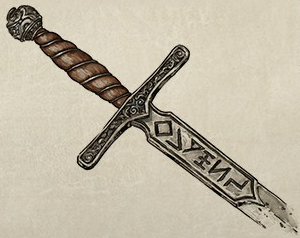 A sentient sword that the Watcher finds in the Old City beneath Neketaka. Modwyr is waiting for her owner - a great swordswoman - to return. With some convincing, she can be talked into soulbinding with the Watcher so they might use her until they find her mistress. 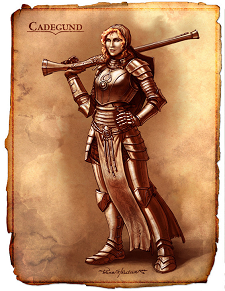 A priestess of Magran, goddess of war. Wields an arquebus and hammer, and wears Magran's emblem, a bomb, on her breastplate.