"No sleep for the Watcher."

The main protagonist of the story. Starting with a race, class, and background tailored to the player's choice, the Watcher is a newcomer to the Dyrwood, traveling with a caravan to Gilded Vale on the promise of cheap land and a place to settle. Due to unforeseen circumstances, the caravan is forced to stop for the night in a dangerous part of the woods, home to hostile natives who don't take kindly to interlopers.

The caravan is soon destroyed, and the PC, along with other survivors, manages to evade the tribesmen and enter the ruins of Cilant Lîs. Thereafter, they get involved in a supernatural event that will thrust them to the forefront of the main conflict, awakening their powers as a Watcher—a person who can see past lives, perceive souls, and manipulate them as they see fit. 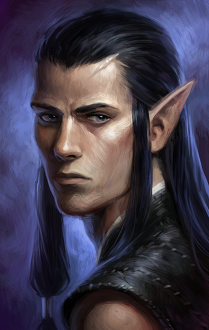 "It's hard to be comfortable in your own skin when you're sharing it with someone else."
Voiced by: Matthew Mercer

An elven wizard first encountered outside the Black Hound Inn in Gilded Vale. Being a foreign noble, and an elf to boot, he's had difficulty acclimating to the locals, who now want to kick his teeth in. The Watcher gets involved, and Aloth, grateful for the assistance, invites himself to the party. He returns as a companion in Deadfire. 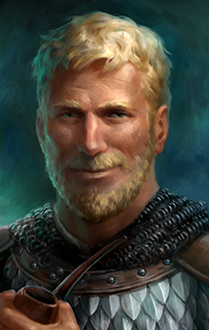 "Tough to walk very far without a soul. The Hollowborn, usually you'd have to stack 'em in a wheelbarrow and push 'em around."
Voiced by: Matthew Mercer

A human fighter and veteran of the Saint's War. Edér's not welcome in his hometown of Gilded Vale, for various reasons, chief among them being that he is a follower of Eothas. Seeing that his prospects in his hometown are dim, he decides to tag along with the Watcher. He returns as a companion in Deadfire. 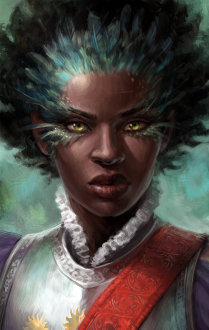 "The safety of the Republics is being decided here. If I do what needs to be done, there'll be time enough to beg forgiveness when the dust settles."
Voiced by: Mela Lee

An avian godlike paladin from the Vailian Republics, she's first encountered when the Watcher wanders into Ondra's Gift in Defiance Bay, and offers to join the party after the manager at the Vailian import/export warehouse is tended to first. She joins the Watcher in the hopes of serving the larger interests of the Vailian Republics, rather than the relatively short-sighted goals of the Council of Ducs. She returns as a companion in Deadfire.