Walking the Earth
aka: Walk The Earth 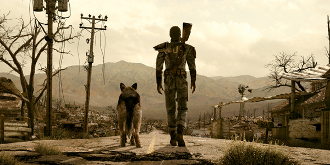 'Cause I'm a wanderer, yeah, a wanderer...
"I'm just going to walk the earth. ...You know, like Caine in Kung Fu. Walk from place to place, meet people, get in adventures."
— Jules Winnfield, Pulp Fiction
Advertisement:

Most of us would agree with Vincent Vega's response to Jules's quote above: "You're gonna become a bum! If you don't have a job, a home, and legal tender, that's all you'll be is a bum. Someone who picks in garbage cans and eats the stuff I throw away." Most people who go walking the earth by themselves are male (or disguised as male). Females generally belong to a nomadic group, mostly for defense purposes.

Some Walkers have some skills that they utilize to make a trade/earn a living while traveling, like hobos. (Roma are also traditionally known for this.) Some occupations, such as cobbler and tinker are traditionally nomadic because you would use up your customer base in a location and have to move on to the next only to circle back when your first customers had worn out their shoes or pots. The music business also sees a lot of these; touring musicians get at least a taste of this life, and those who want more work can always find it outside of their bands as fill-in musicians, tour managers, techs, and other "road jobs".

This trope is a very American one and is quite common in older Westerns. As far as big TV producing nations go, The U.S. of A. has the geography best suited to this form of adventure. Australia also has the tradition of the Walkabout, where young men would wander the land for months as a spiritual journey. However, this occurs in other countries as well, such as the Rōnin stories of Japan and the Chivalric Cycles of Europe and the U.K.

Compare Wandering Culture for when a whole society practices this trope.