The first and most iconic era of BIONICLE stars a team of six Toa destined to awaken the Great Spirit as they protect the villagers of the island of Mata Nui from the many threats unleashed by the Makuta.
open/close all folders
The Toa Mata / Toa Nuva 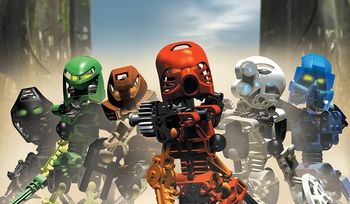 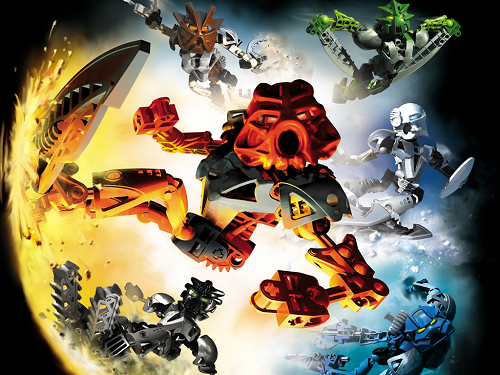 Unity
Great warriors with great power, drawn from the very elements themselves. Together, they were six heroes with one destiny: to defeat Makuta and save Mata Nui.

The Toa Mata were created to get Mata Nui back on his feet should anything ever happen to him, and they were put in hibernation until they were needed. After awakening, they eventually gained enhanced Toa Nuva forms, and even later on were given Adaptive Armor that can alter its abilities for any terrainnote The known configurations are the "Phantoka" Sky Form and the "Mistika" Swamp Form used in Karda Nui. 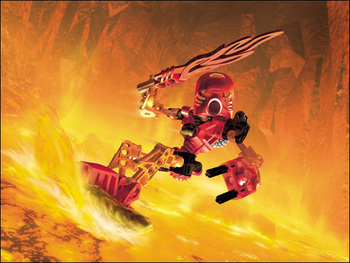 as a Toa Mata. 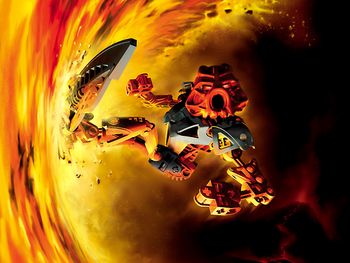 as a Toa Nuva.

"And I pledge to you that as Toa of Fire I will do all I can to keep you and our home safe from harm. Remember — your bravery, your wisdom, your spirit, make you as mighty as any Toa!"

Toa of Fire and the leader of the Toa Mata/Toa Nuva, Tahu is bold and aggressive to the point of recklessness; nonetheless, he is a fiercely noble and courageous hero who takes his leadership role very seriously. While initially very hot-headed, he has since grown more patient and open-minded. Tahu was last seen reverted back to his Mata form, so that he could use a set of golden armor (though he retains his Adaptive Armor as well). 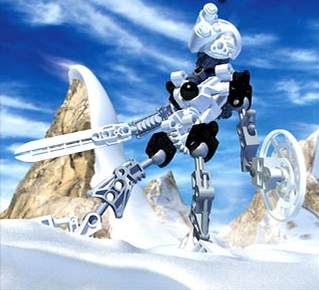 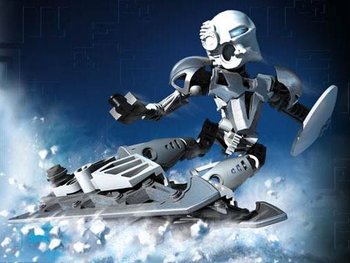 The Toa of Ice, Kopaka is cold and aloof Toa who prefers to work alone and often butted heads with Tahu early on. He has grown to understand the importance of Unity, even if he still isn't comfortable with it and simply leaves when he feels that he is no longer required. A skilled intellectual, his analytical mind has won many battles. 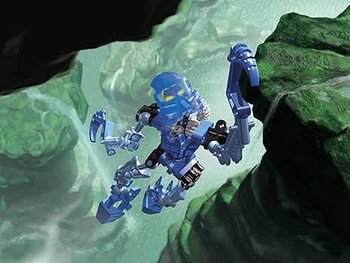 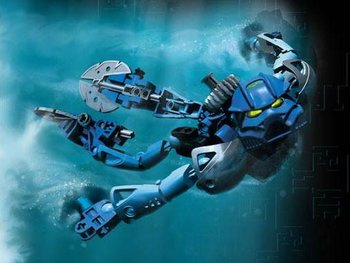 "For despite all our interesting elemental powers we may have, I expect that our best weapon is our minds."

The Toa of Water, Gali is as wise, warm, and gentle as the oceans she commands. Thus, she takes it upon herself to be the peacekeeper among the Toa. That said, she is also a formidable fighter and will not hesitate to use her awesome power in the defense of her people. 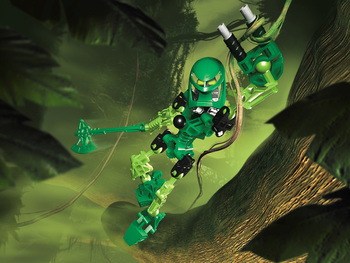 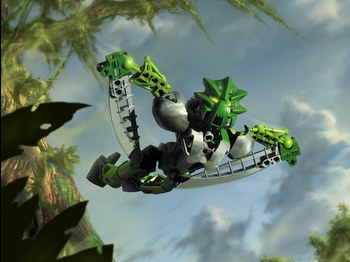 The Toa of Air, Lewa is wild, free-spirited, and always willing to help. Initially overconfident and preferring to go it alone, his experiences being unwillingly controlled by the Makuta and Bohrok have wisened him up. 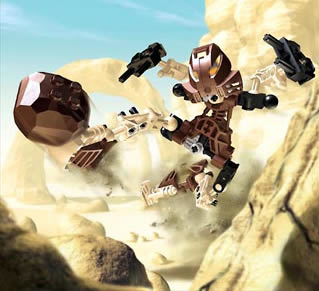 as a Toa Mata 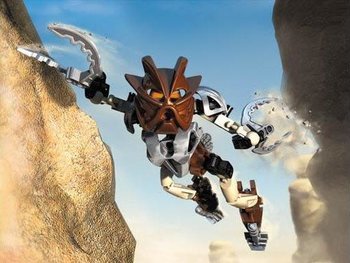 as a Toa Nuva
"Why not team up? It might make things easier."

The Toa of Stone, Pohatu is a friendly, easygoing sort. Dependable and brave, he is a reliable, personable ally who boosts morale among the team. 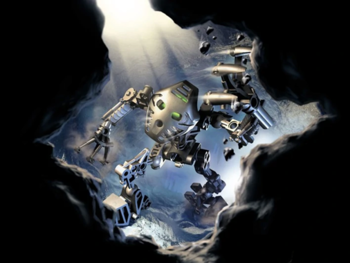 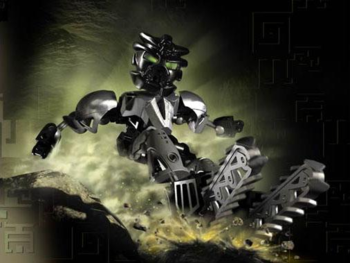 As a Toa Nuva
"I believe I've done what I had to do. I've taken the first step toward the future. No one ever said the trip would be an easy one."

The Toa of Earth, Onua is very wise and patient hero. A Toa of few words, he only speaks if the feels there is something necessary to be said. 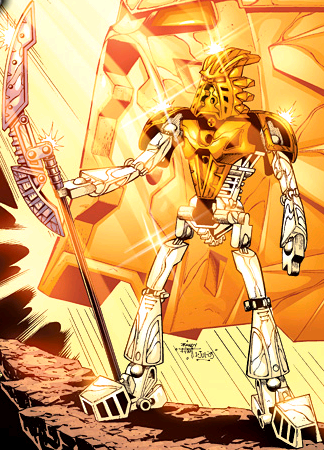 I am Takanuva, Toa of Light! 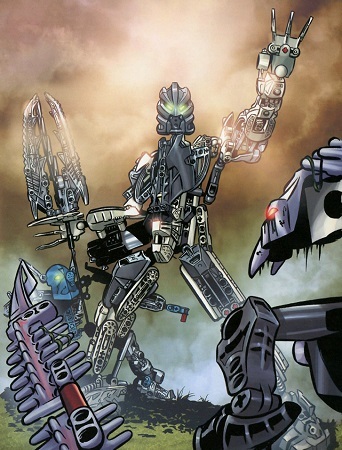 This was what you wanted, wasn't it? Toa consumed by darkness, Toa not hampered by things like mercy or morality. Well, now you can choke on it. 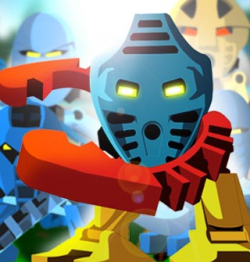 Even I get lucky sometimes.

You know me — always different!

Takua was an adventurous and eager Matoran who became Takanuva, the first and so far only Toa of Light. He's still unsure of himself in the role of a hero, but very willing to step up to the cause. Word of God says that he is the very first Matoran built by the Great Beings.

I am Onepu, High Commander of the Ussalry, Veteran of the Makuta Wars, Right Hand of Turaga Whenua, and Champion Kolhii Forward of Onu-Koro. At your service, my Lady.

He's the captain of the Ussalry, the military force of Onu-Koro. Rather haughty and quick to pawn off his labor to Taipu.

A group of Matoran whom Takua banded together to defend Kini-Nui from Rahi while the Toa fought Makuta. They've since reunited to help out the survivors of Teridax's reign, minus Kapura and Hafu, who are lost on Bota Magna.

It is as Vakama said. I practiced and became skilled. I now know the secret art of traveling great distances by moving very slowly. It is only a small matter for me to be wherever I am not. It is a useful skill.

The other Matoran never thought much of the slow-to-act Kapura, but Vakama knew how wise he truly was, and taught him the art traveling quickly by moving slowly.

It is good to be on an adventure with you again! I thought Nokama would keep me locked up in the village forever.

She's a talented girl with a thirst for adventure, who often snuck out of the village to slate said thirst and cavort with the apple of her eye, Hewkii.

Hafu is a Matoran of many skills, most prominently carving, as was very proud and boastful of that fact.

A long time ago many rocks fell on my head. That did not hurt much. Neither do these Rahi.

Taipu can be very gullible, but he's nontheless a loyal, hard-working sort with a big heart.

Highbranch home locked and protected. Downtree guard am I, set here because... I fly not.

A spirited yet clumsy Le-Matoran whose dream of flying is dashed by his fear of heights,

Only hardy Matoran can withstand the wind and ice of Ko-Koro. These Rahi will find me tough to overcome.

Kopeke was merely shy as opposed to the antisocial people of his village, but his talent as an ice carver is second to none. He is the the current Chronicler.

Legends of Mata Nui
Mata Nui was the Great Spirit who was sent by the Great Beings to look after the world, until he was put to sleep a thousand years ago by his brother Makuta. Mata Nui and the Great Beings were Minor Major Characters until their secrets were revealed in the Bara Magna saga, so go to that section for information on them.
Makuta 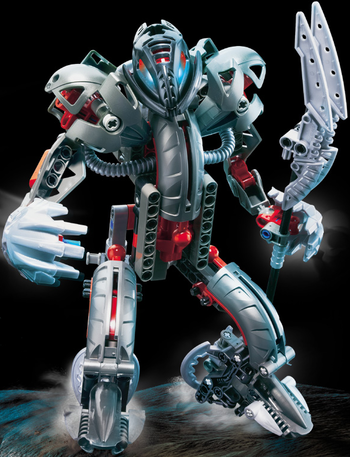 "Even my... setbacks... are planned for, and so I shall win in the end."
I am the shape in the shadows. I am the darkness in the heart of Mata Nui. I live in the dread stories told by the Turaga around the village fires. The dark creatures — the Manas, the Rahi — are my servants. I am Makuta.

The Big Bad. The Villain to end all villains. Described in legends as the brother of Mata Nui, he envied his reverence and executed a daring plan to wrest control of the universe away from the Great Spirit. His real name is Teridax, but he prefers to go by his title of "Makuta" (specified as "the Makuta of Metru Nui" when there's more than one Makuta around) to the point that few outside his brother Makuta know what his real name even is.

A strange reptilian Rahi that hunts by lurking beneath the water and ambushing with powerful punches. They are one of many Rahi species that Makuta controlled via Infected Masks to attack the Matoran of Mata Nui. Makuta also bred a stronger mutant specimen called the Tarakava Nui sometime prior to the enactment of his plan.

These irritable insects fly at high speeds attacking with wings, claws, and stingers. The Nui-Rama and Nui-Kopen are bitter enemies due to the fact that they share the same prey, but Makuta's Infected Masks will certainly make them cooperate against the island's do-gooders.

These vicious, hotheaded scorpions posess powerful stingers that can either shoot venom from afar or deliver a deadlier blow up close. Naturally, they were perfect for Makuta to enslave with his Infected Masks.

One might not think of tigers and bulls to be similar animals, but try telling that to these beasts. With lunging necks and powerful bites, Makuta enslaved them in his bought against the island of Mata Nui, often teaming them up despite them not naturally coexisting. Worse still, the rat-like Kuma-Nui is surprisingly larger and packs a similar bite.

These savage crab Rahi served as the guardians of Makuta's lair. Smarter than most Rahi and powered by heat, the Toa could only stand a chance against them by combining into the Toa Kaita. The Mana Ko, rumoured to be Mukata's ultimate guardian, could fire blasts of disintegrative power on top of all that.

This majestic, four-winged hummingbird Rahi are usually docile, yet highly effective defenders. After ages of difficulty, the Le-Matoran eventually managed to train these birds to serve as mounts for their military, the Gukko Force. There are three named subspecies of Gukko: the hawk-like Kahu (whose wings glow in flight), the vulture-like Kewa, and the duck-like Taku.

Strong, swift, and friendly, Ussal crabs are Matoran's best friend. They are often employed for cart-hauling, racing, and acting as mounts for Onu-Koro's military, the Ussalry. One Ussal named Pewku has grown a lot older and bigger than most, and has been passed down through many owners, such as Orkham and Takua. 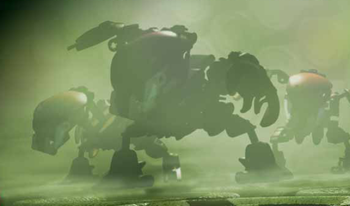 Bohrok are insectoid drones whose main purpose was to clean all matter from the island of Mata Nui. Unlike the other biomechanical races, they were mechanical drones driven by organic Krana parasites. Initially awakened by Makuta, the Bohrok swarms were defeated by the Toa Mata when the Toa trapped the Bohrok's twin Bahrag queens in a cage of solid Protodermis.

It was later revealed that their purpose is to ensure that the camouflage of flora on Mata Nui's face is gone in preparation for him returning to an upright position, and that they were awakened too early. The swarms were thusly reawakened by the Toa Nuva to resume their quest of destruction, and have since gone back to sleep when their mission was completed.

The Bohrok Va were robot drones that act as scouts and couriers for the Bohrok, replenishing any lost Krana. Unlike their bigger cousins, the Bohrok Va are not Krana-driven, and thus not as easily incapacitated. 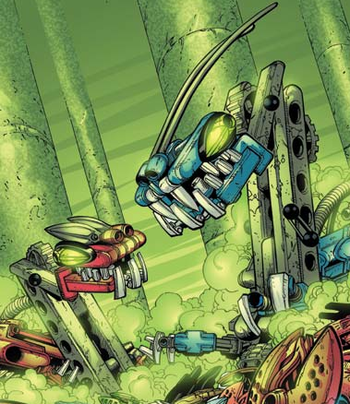 "You dared challenge the Bohrok swarms? You have no hope! — The mission will proceed!"
Now Mata Nui will be as it was in the Before-Time! All that does not belong will be removed... beginning with you! 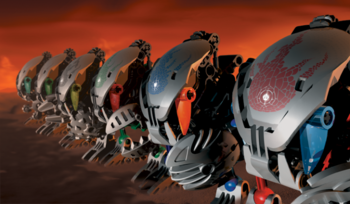 Restart the swarms
They are an elite squad of Bohrok born from an unknown mutagenic substance. Possessing unique Elemental Powers and indepenedently-minded Krana-Kal, their mission is to rescue the Bahrag should anything happen to incapacitate them.
The Rahkshi 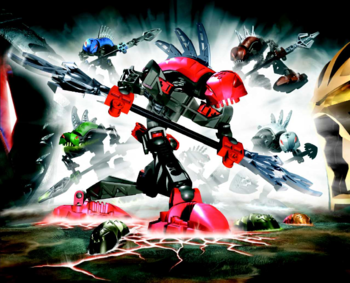 "Go my sons, use the shadows, and keep my brother asleep."
The Rahkshi are suits of armor operated by sluglike creatures called Kraata, which are spawned from the Makuta, earning the nickname "Sons of Makuta". They are used by the Brotherhood of Makuta as part of their army.