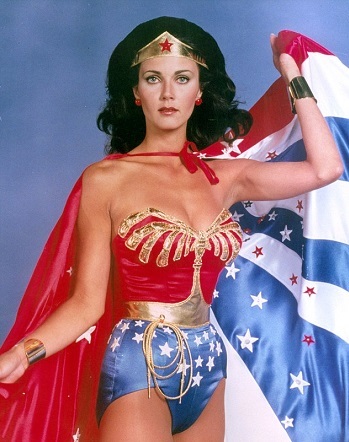 "Wonder Woman!
All the world's waiting for you
And the power you possess
In your satin tights
Fighting for your rights
And the old red, white, and blue!"
—Series theme
Advertisement:

Wonder Woman is an American live-action TV series that originally aired from 1975 to 1979, based on the comic book superhero Wonder Woman. It starred Lynda Carter as Wonder Woman and Lyle Waggoner as Steve Trevor.

The movie-length pilot episode and first season aired on ABC, and were set during World War II, inspired from the original comics by William Moulton Marston and Harry G. Peter. From the second season, the series moved to CBS, was retitled The New Adventures of Wonder Woman, and the setting moved to the present day (ie. The '70s). Wonder Woman, being an ageless Amazon, hadn't aged a day, while Lyle Waggoner switched to playing the remarkably familiar-looking Steve Trevor Jr.

An unrelated failed Pilot Movie was broadcast about a year earlier, Wonder Woman (1974), starring Cathy Lee Crosby as a non-powered Wonder Woman in a very loose adaptation (verging on In Name Only). Even earlier, in the mid-1960s, William Dozier (who produced Batman and The Green Hornet) produced a five-minute Wonder Woman screen test that leaned more heavily towards comedy, which portrayed Diana as living with her mother.

In 2011, David E. Kelley attempted to produce a pilot for a new Wonder Woman series starring Adrianne Palicki, best known for her role in Friday Night Lights, although the project was cancelled before the pilot had been completed. The unfinished pilot attracted poor reviews and has a page here.

In January of 2015, a digital comic continuation à la the Batman '66 comic kicked off under the title Wonder Woman '77, written by Marc Andreyko of Manhunter and Batwoman fame. Print anthologies are being released a couple of times a year. November 2016 saw the release of digital crossover miniseries Batman '66 Meets Wonder Woman '77, co-written by Andreyko and Batman '66 writer Jeff Parker, followed in December 2016 with another crossover mini, Wonder Woman '77 Meets Bionic Woman, written by Andy Mangels. This version also made a cameo appearance in the tie-in comic to the Arrowverse adaptation of Crisis on Infinite Earths; her Earth is designated as Earth-76.