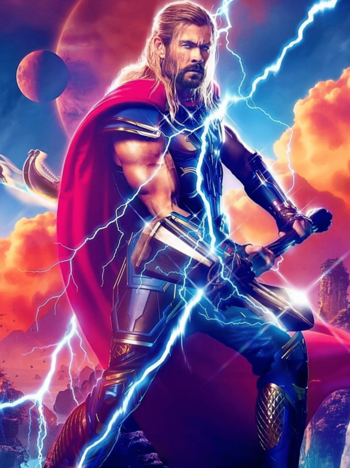 "I choose to run towards my problems, and not away from them. Because that's what heroes do."
Click here to see him before Thor: Ragnarok 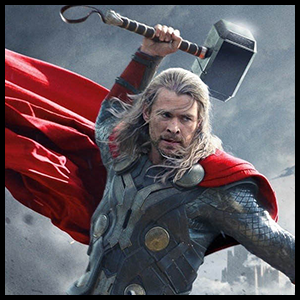 "You and I, we fight for the same cause, the protection of this world."
Click here to see him post Time-skip in Avengers: Endgame

"It's time for me to be who I am, rather than who I am supposed to be."

"Father, I cannot be king of Asgard. I will protect Asgard and all the realms with my last and every breath, but I cannot do so from that chair. Loki, for all his grave imbalance, understood rule as I know I never will. The brutality, the sacrifice... It changes you. I'd rather be a good man than a great king."

The Norse God of Thunder, son of Odin and Frigga, brother of Loki and Hela, and the heir to the Asgardian throne. He carries Mjölnir, the mythical hammer that only those deemed worthy may wield (or even lift), which grants him the powers of flight, storm-based Weather Manipulation, and armor that gives him Super Toughness and Super Strength much higher than the Asgardian norm.

To teach his son humility after Thor nearly reignites a war with another world, Odin exiled Thor to Earth, where the Asgardian met and began an on-again-off-again relationship with a scientist named Jane Foster. While Thor's visit to Earth helped teach him to rein in his more questionable impulses, he continues to be a bit of a Blood Knight and Glory Seeker, seeing his work protecting the Nine Realms and fighting with the Avengers as grand adventures.

Unfortunately, this boisterous attitude is harshly tested as the threats against him and his allies grow, culminating in a Trauma Conga Line that ends in the destruction of Asgard and the near-extinction of his people. Driven by vengeance, he seeks a way to destroy Thanos and his armies to avenge his race... and rather unsure what to do with himself in the aftermath. 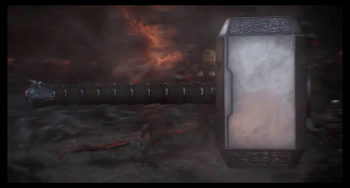 "Whosoever holds this hammer, if he be worthy, shall possess the power of Thor."
— Odin Borson's enchantment upon Mjölnir

The hammer of Thor Odinson, forged by the Dwarves of Nidavellir. 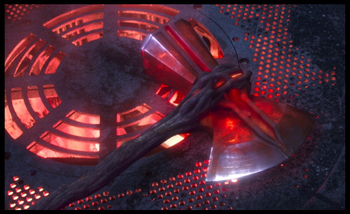 "A king's weapon. Meant to be the greatest in Asgard."
— Eitri, Avengers: Infinity War

Thor's new weapon, a hammer-axe forged in Nidavellir in the hope that it makes him powerful enough to kill Thanos. 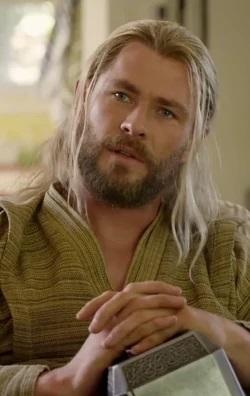 "Dear Steve Rogers. Do you remember when I goaded you into killing those prisoners, and you made me swear to not tell the other Avengers? If there's any other secrets that you need kept, just let me know. Because I'm not up to much, at the moment."

The Thor of Earth-16828, who after the events of Age of Ultron decided he needed some "me time" and moved in with Darryl Jacobson in Australia. 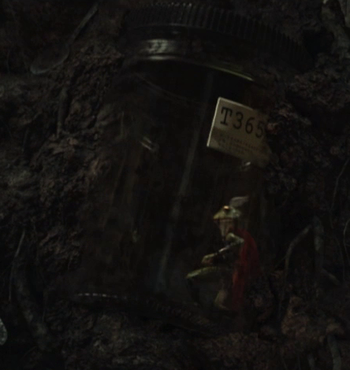 A Thor Variant residing in the Void, trapped underground in a jar.

On Earth-51825, Thor was shot and killed by Hawkeye while trying to retrieve Mjölnir from the crater. 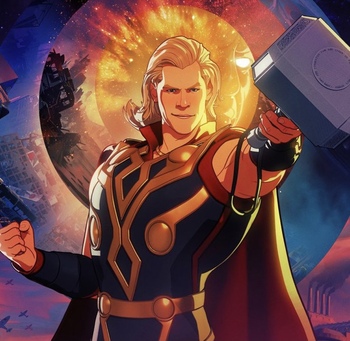 Affiliation(s): Asgard, Guardians of the Multiverse

On Earth-72124, Thor was never raised alongside Loki and remained an only child, eventually throwing an epic party on Earth. 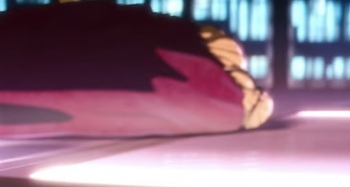 The Thor of Earth-29929, who was killed during Ultron's genocidal quest for peace.