Here is a list of villains from the Second Age.

To return to the main character index, click here.

A global organization of war profiteers and "death merchants". Its main goal is to profit from wars, and it does this by supplying warring countries with their weapons, then sitting back and watching as the countries tear each other apart. The problem is that it's extremely hard to dismantle - Black Ghost has facilities and agents everywhere, waiting for the right chance to stir things up until the situation devolves into full-out war. It is responsible for the creation of the 00-Cyborgs, wanting to produce a line of pony-machine hybrids... but fortunately for the world, it turns out to be one of their greatest mistakes, as the nine ponies who became 00-Cyborgs would escape and rebel against them by opposing their forces at every turn.
General
Advertisement:
Skull
The leader of Black Ghost, and the person responsible for creating the 00-Cyborgs.
Death Dealer
A Black Ghost commander who funded Neighpon's criminal underground, and served as the archenemy of Traveler and the Anti-High Tech Crimes Division.

Children of the Void

'Faction: Himself, Children of the Void (Former)

"This planet... this universe... I will destroy it all! Let's all go out with a BANG!"
Void Killer (his entry here

) is an "older brother" of Void Traveler, and a hedonistic, insane monster who loved the idea of death so much that he nearly succeeded in taking both Equus and the entire universe with him.
Advertisement:
Void Traveler

Faction: Church of the Void

"We were going to destroy ourselves eventually anyway, why not go out to the one thing that will live on? The Void calls and it's time to listen and disappear! Ciao!"
Void Traveler (his entry here

) is a member of the Church of the Void and is a nihilistic entity who seeks the destruction of all life.
Spoiler Character

Fegrð, the Author of Beautiful Ends

For his profile, see Codex Equus The Shadowed Ones.

"I am our cause. I am everything our Reich desires and embodies, distilled into a single vessel! I am the will of the glorious fatherland made flesh! I AM our ideology!"
Herrenvolk (His entry here

is a member of the Herrenhelden and later its successor Uberreich, and one of the strongest metabeings serving Reichist Germaney during the Second Great War. While appearance-wise he resembles a Pony of the 'Master Race' as idealized by the National Totalists, in reality he was something far worse: created through occultic means by the Reichists' occult organizations, he is in actuality a living Magical/Metamagnetic embodiment of Reichism/National Totalism itself. Unable to die so long as somepony somewhere believes in National Totalism or something similar, Herrenvolk would become a feared symbol of those who once sought to turn Tellus into a graveyard in the name of their twisted genocidal dogma, although his very nature would prove to be a curse as much as a blessing for not only the Reichists but even himself.
Kaiserin
"No matter who you fight, regardless of what causes you fight for, do not forget your duty, and never forsake your honour."
Panzerpferd (Panzer Pony)
Sturmbannführer (The Major)
Sturmtruppler (Storm Trooper)
Terrorgeist (Terror Mind)
Walküre (Valkyrie)

One of the many, many secret conspiracies both ancient and modern manipulating Pony civiliation and history during the 'Second Age' for various inscrutable agendas, Interregnum is the modern form of an ancient society founded by the Sole Survivor of the original Heroes of Virtue who defeated and sealed away the horrific Queen Dark Crystal, at the cost of most of their lives. Haunted by the deaths of his friends and Queen Dark Crystal's reign of terror, the original Scholar of Justice became a Knight Templar who believe any form of Magic is too dangerous to exist and be used/abused by any-pony, and would risk having Queen Dark Crystal return or another one like her emerging. To that end, he would dedicate his and his organization's existence to eradicating all magic and sorcery from the world for both good or ill.
General
Sir Shining Lance, the Eternal Knight

) is Bright Eye's fallen predecessor and the original Scholar of Justice who founded the Interregnum. As it turns out, he's still alive and returns to cause the Seven trouble.

) is Sir Shining Lance's right hoof mare and the orcastrator of The Masquerade as a whole.

Faction: Herself, the Sinful Seven

) is a model who became a supervillainess due to her growing obsession with beauty, and was Bon Bon's staunchest opponents before she turned a new leaf.
The Envious Eye
Lord Jubiter

Faction: Himself, the Sinful Seven

) was a member of the Sinful Seven, and a delusional criminal with a god complex.
War Rock, the Magic Stallion 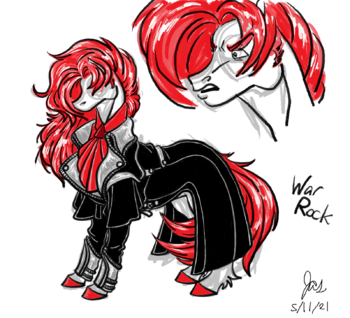 "Name's War Rock, thanks a lot,
I know you love the thing I've got!
You've never seen the likes of me,
Why, I'm the biggest thing since Great War III!"
War Rock (his entry here

) is another famous musician from the Second Age, yet one that eventually went down in history as a diabolical villain because of the atrocities he made in trying to preserve his own legacy.
Calculous, the Broken Cog

) is a phantom thief and general mischief-maker who also served as Patch's Arch-Enemy.

"All I am now is what I am!"
Cold Iron (her entry here

) is a cybernetic supervillain who has proven herself to be one of the most dangerous individuals Metamare has ever faced in her entire superhero career.

Cold Iron was originally a vain, petty and ultimately ordinary criminal named Merry Roses, who was crippled in a car accident while trying to escape from Metamare. After a trip to the hospital, she was manipulated into being converted into a cyborg codenamed C-0047 by the villainous Black Ghost organization. The power granted to her by her new cyborg form allowed her to become a dangerous supervillainess, but came at a tremendous cost to her Equinity. With tremendous strength, speed and a form that could depower/poison metamagnetically-empowered superheroes, she would sell her service and alliegances to those who could help maintain her body, so long as it gives her a chance at infamy, wealth... and revenge against those she hold a grudge against, such as Black Ghost, but ESPECIALLY Metamare.
Duplimare
The Great Ghostie
First mentioned in a Drabble

, the 'Great Ghostie' is a powerful Reality Warper in the form and alias of a ghost who has an interest in Metamare, preferring to mess with and play games with her with his phenomenal powers in order to get her attention and get her to date him.
Max Margins, CEO of Margins Multinational

EPOCH
EPOCH (Enhanced Pony Optimized for Conspiracy and Havoc) is an enemy of Silversmith who was originally enhanced by a villainous organization as a tool and weapon to advance its villainous goals, but became a much more dangerous supervillain in his own right.
Khan Genome
Precognita

The Cellist
A music-themed supervillain and one of the Trailblazer family's enemies.
Cerebral Commander
Master of Shadow
—-

General
Rita the Repulsive, the Witch From the Stars
Goldar the Grifforzer
Psycho Rangers (Overrangers)
The Psycho Rangers are an Evil Counterpart team of the Power Rangers, villainous where they are heroic and often come with additional enhancements that was meant to make them even stronger, smarter, faster, and generally better than their Good Counterpart, with varying levels of success. While over the course of Known History succeeding teams of Power Rangers would face their own Psycho Rangers groups, the first of all such incarnations appeared in the 'Second Age' in the form of the Overrangers, created by Overmare herself during the time she successfully subdued Neighjor and managed to partially reverse-engineer the Rangers' powers through studying him and his secrets. The Overrangers group would subsequently clash with the Power Rangers many times, holding the initial advantage at first in terms of capabilities, a gap which the Power Rangers would eventually bridge.

General
Queen Dark Crystal, the Grand Matron of All Witches

"It seems you pathetic ponies have forgotten what real magic is. Allow me to remind you..."
Queen Dark Crystal (her entries here

) is one of the vilest and most powerful witches known to sapientkind, and one of the most dangerous villains the Tales/Virtuous Seven group has ever faced in their younger years.
Crimson Warlock

General
Neighkus, the Overlord of the Second Dimension

Faction: Herself, Past Solutions Inc.

"THE PAST WILL BECOME THE FUTURE - AND TRAMPLE THE PRESENT UNDERFOOT!"
Ancient Abyss (her entry here

) is a villainous sapient Dinosaur and a supremacist who wanted to bring the "past" into the "future" - by turning everyone into sapient Dinosaurs.
Black Diamond, the Troll King

) is the most powerful troll to ever live, Evil Overlord of Rìoghachd Gràin, and Arch-Enemy of Majesty's line of succession.

"Never again would a force of nature bring untold destruction without our control or permission. No matter what it takes, I will bring the very earth itself to heel!"
Professor Dai Dee Yao (his entry here

) is a renegade geophysicist from Chineighese Republic who is widely cited as a quintessential example of a person who became a villain when motivated by tragedy and resentment, as he ended up terrorizing the world in his determination to control and end the menace of earthquakes after being badly affected by them.
Dame Moderatus, the Traitor Princess

Faction: Herself, the Order of the Blackguard, other factions

"Behold your perfect self: Is it not magnificent? Are you not magnificent? It could be you, and it will be you. Touch it, dear holder, and embrace the vision. Embrace your majesty..."
The Devil's Mirror (its entry here

) is an ancient, sapient artifact created by the Fallen Alicorn, Morning Star, and like its creator, it has corrupted many innocent people and spread evil wherever it went.
Gamemaster
High-Roller/Mr. Scratch, the Emperor of Corruption

) is the God of Selfishness, Corrupt Corporate Executives, and Corporations, and the Arch-Enemy of Prince Maestro and Prince Alpine Butterfly.

"Revere me. Give praise unto me. Me, the will of Coltalia made flesh! Me, intelligence and power given form! All shall bow down to the OVERMONARCH!"

) is a Neighponese supervillain known as the country's worst in the Second Age.
The Reichsfuhrer
Solemn Monday
Winter Kaiser
Supreme Greaser
A son of the Cellist who became a music-themed supervillain like his father.
Dr. Radiant Mind, the Demon Doctor

) is a leading nuclear physicist of the Second Age turned Mad Scientist and mass murderer in his pursuit of studying the effects of radiation on the pony body.