This is the page for characters introduced in the first BioShock game. For characters seen throughout the series, such as the Big Daddies, Little Sisters and Splicers, please see here. 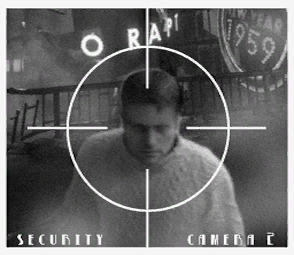 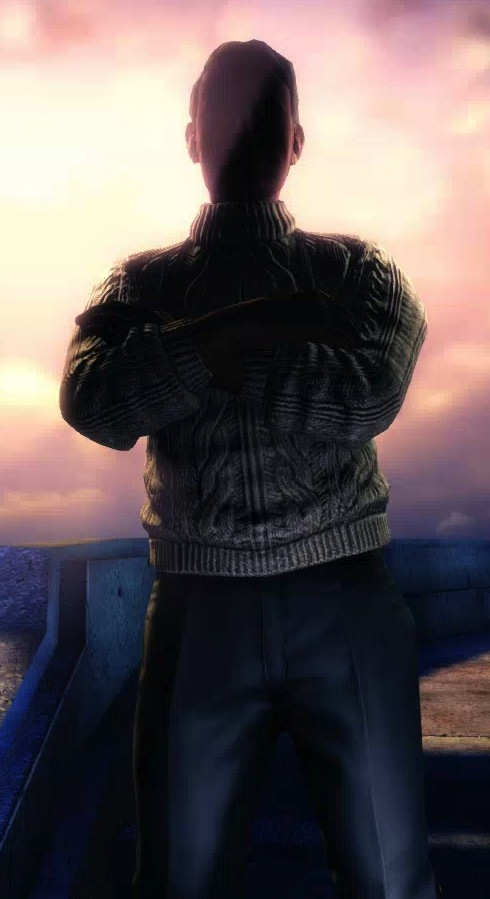 "When Mom and Dad put me on that plane to visit my cousins in England, they told me, 'Son, you're special, you were born to do great things.' You know what? They were right."

The protagonist of the first game, an American of rural origin who ended up in a plane crash over the Atlantic ocean and landed right next to Rapture's entrance in early 1960.

Andrew Ryan
Has its own page.
Atlas 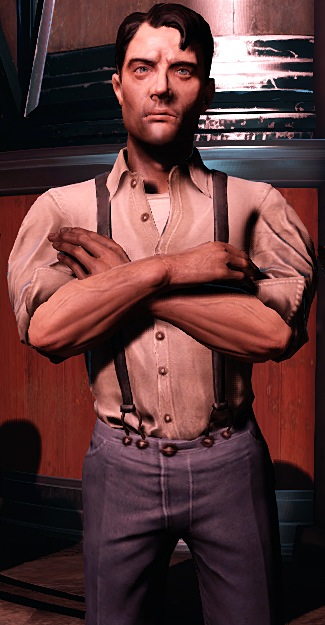 "I am not a liberator. Liberators do not exist. These people will liberate themselves."

An Irish fisherman who guides Jack over his shortwave radio. He brought his wife and son to Rapture in search of a better life, but is now desperately trying to get them out. He is gradually revealed to be the leader of the Anti-Ryan rebellion.

He serves as a major character in the second half of BioShock Infinite: Burial at Sea, demanding for Elizabeth's assistance in escaping from Fontaine's Department Store. 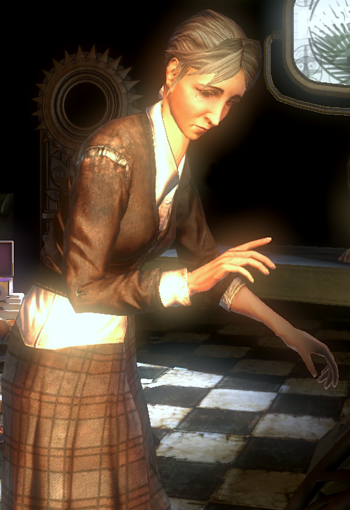 "What makes something like me? I look at genes all day long, and never do I see the blueprint of sin. I could blame the Germans, but in truth, I did not find tormentors in the Prison Camp, but kindred spirits. These children I brutalized have awoken something inside that for most is beautiful and natural, but in me, is an abomination... my maternal instinct."

A high ranking scientist of German-Jewish origin within Rapture, who mothered the Little Sister project and later came to view them as her surrogate children, in atonement for removing them from their parents and experimenting on them.

"Spent the morning jawing with that Kraut scientist. She's damaged goods, all right. Just like all those chumps they scraped out of them prison camps. But she's no crackpot... she's gonna make me the kinda scratch that'll have Ryan look like he's runnin' a paper route. She just needs some supplies to get the ball rolling... and a friend to watch her back."

An infamous New York con man and former business rival of Andrew Ryan's who rose to prominence and power through the sale of prohibited goods. His later discovery and marketing of plasmid technology was instrumental in bringing about Rapture's civil war and downfall. 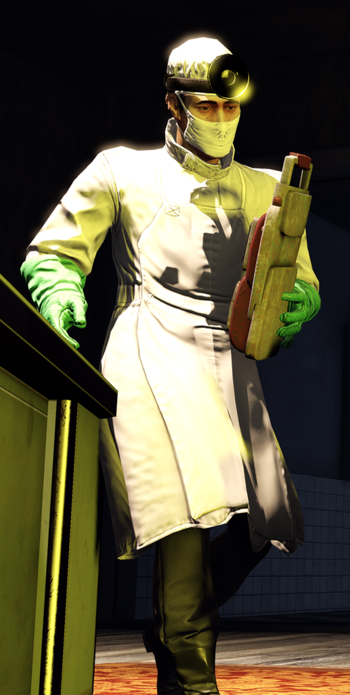 Dr. Yi Suchong was one of the leading scientists in Rapture, who worked for Fontaine on plasmid tests, as well as designing Little Sisters and the first of the Big Daddies. He and Dr. Tenenbaum were also responsible for creating Jack and the mental conditioning that would be used to control him.

Other Citizens of Rapture

"With genetic modifications, beauty is no longer a goal or even a virtue, it is a moral obligation. Do we force the healthy to live with the contagious? Do we mix the criminal with the law abiding? Then why are the plain allowed to mingle with the fair?!"

Before Rapture's societal collapse, J.S. Steinman was one of the city's most famous medical professionals; already a highly innovative plastic surgeon, he used ADAM to sculpt his patients to the highest possible standard of beauty. Unfortunately, he also tried a few of these new techniques himself. As such, by the time Jack meets him, Steinman has degenerated into a splicer, and now sees his patients as little more than human-shaped canvases on which to practice his skills as an artist-specifically, cubism.

"We all come down here, figured we'd all be part of Ryan's Great Chain. Turns out Ryan's chain is made of gold, and ours are the sort with the big iron ball around your ankle."

Initially just a worker in the Neptune's Bounty fisheries, Peach was drawn into becoming the leader of Fontaine's smuggling ring. As Fontaine started to take advantage of his employees and the Rapture Death Penalty was introduced, he found himself trapped between a rock and a hard place. He ultimately snitched Fontaine out to Ryan and became paranoid and reclusive, refusing to believe Fontaine was really dead.

"Today Arcadia was closed off to all but paying customers. The man hires me to build a forest at the bottom of the ocean, and then turns a walk in the woods into a luxury."

A renowned botanist who was recruited by Andrew Ryan to build an undersea forest that would provide oxygen to Rapture. She eagerly accepted and built the massive garden called Arcadia. She was angered by Ryan's increasing control over the garden as he began charging people to see and for the oxygen it provided, but continued working for him in order to continue her experiments with ADAM and plant life.

"I know why you've come, little moth. You've your own canvas. One you'll paint with the blood of a man I once loved. Yes. I'll send you to Ryan, but first, you must be part of my masterpiece. Go to the Atrium. Hurry now! My muse is a fickle bitch, with a very short attention span!"

Artist, writer, actor, director and composer, famous for writing Rapture's national anthem, "Rise, Rapture, Rise", as well as many other strange and eccentric works. Notably hostile towards those who question his art and/or closeness to Andrew Ryan. Jack first encounters him in Fort Frolic, after Cohen jams Atlas' radio transmission and blocks the exits; welcoming Jack as a fellow artist, he gives him the task of killing his former disciples and photographing their corpses.

Cohen makes an appearance in Burial At Sea, hosting a private party at his personal club before the New Year's Eve Riots.

"I thought Andrew Ryan was a great man. I was a fool."

Andrew Ryan's girlfriend, she was fanatically loyal to him and his views, and was kept secluded from the plight of many of Rapture's citizens. After she was injured in the New Year's Eve Riots and maimed by Dr. Steinman, Ryan replaced her as his mistress. She grew disillusioned with him and joined Atlas' rebels.

"I told Mr. Ryan when we were building this place; either you build her like a bathtub, or she's gonna turn into a sewer. "No, McDonagh," he said, "we're not gonna build no bathtub... we're gonna build Eden.""

A general contractor who was friends with Andrew Ryan and was recruited to help maintain Rapture, becoming a member of the Rapture City Council. He attempted to moderate Ryan's polices, but as Ryan lost control of the city due to Fontaine's actions and Atlas' rebellion, McDonagh resigned his position and attempted to kill Ryan. He failed and tried to flee the city with his wife and daughter. His family escaped, but McDonagh was captured and executed by Ryan.

"Hanging now, is it? That's what we've come to? Now look, I don't make the laws here, I just enforce them. But I didn't come to Rapture to string men up for running contraband. If Ryan and his crew have their law, then they can have my badge!"

Rapture's head of security. He quickly became disgusted by Andrew Ryan's policies as he cracked down on dissenters. He resigned after murdering Anna Culpepper on Ryan's orders after she offended him and Sander Cohen, and eventually committed suicide.

"Cohen's not a musician. He's Ryan's stable boy. Ryan's corrupt policies crap all over the place, and Cohen flutters around clearing it up. But instead of using a shovel, like you would with a proper mule, Cohen tidies with a catchy melody and a clever turn of phrase. But no matter how nicely it sounds, he can't really do anything about the smell..."

A popular musician in Rapture, who got on the bad side of Sander Cohen, and by extension Andrew Ryan, who has her murdered.