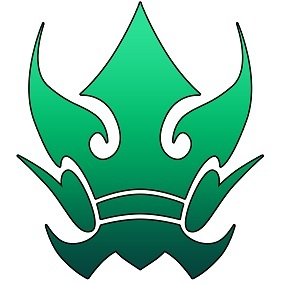 The Alvarez Empire is a colossal military superpower located on Alakitasia, the neighboring continent to Ishgal. Rising tensions with the nation following the destruction of the Magic Council's deterrent weapons have sparked worries of war, and for currently unknown reasons, the Empire seems hell-bent on capturing Lumen Histoire, Fairy Tail's ultimate treasure. A previous attempt at an invasion of Ishgal ended in failure due to the weapons of the Magic Council, but with the Council being killed and Face destroyed, war seems all but inevitable by the time of Fairy Tail reforms itself in X792.

See his entry on the Main Villains page as Zeref.
Yajeel 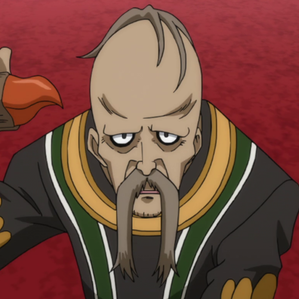 The High Minister of the Alvarez Empire, and grandfather of the Spriggan 12's Ajeel Raml.

The elite bodyguards and personal enforcers of Emperor Spriggan, the Spriggan 12 is also known as the Shields of Spriggan. Each of them is said to be so formidable, their magic power is well beyond Ishgal's Ten Wizard Saints. 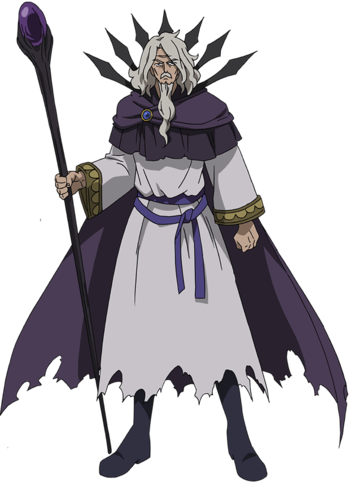 The leader and mightiest member of the Spriggan 12, and the secret son of Zeref and Mavis, though only he is aware of his own heritage. Gifted with tremendous magic power at birth, August can instantly copy any form of Caster-type magic he sees and add it to his ever-growing repertoire of spells, making him one of the most powerful wizards to walk the earth. 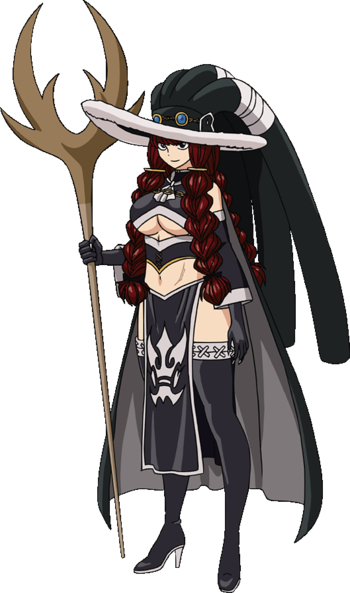 The strongest female wizard of the Spriggan 12, Irene is a High Enchanter who can infuse magic into anything and manipulate it however she wants, making her one of the few among the 12 who could be considered August's equal in terms of magical power. In her heyday, she was the queen of Dragnof and inventor of Dragon Slayer Magic, whose good intentions not only doomed dragonkind to near extinction, but resulted in her own transformation into a dragon. She is also Erza Scarlet's mother, but her deeply troubled history with her daughter has left Irene no more love to give her. 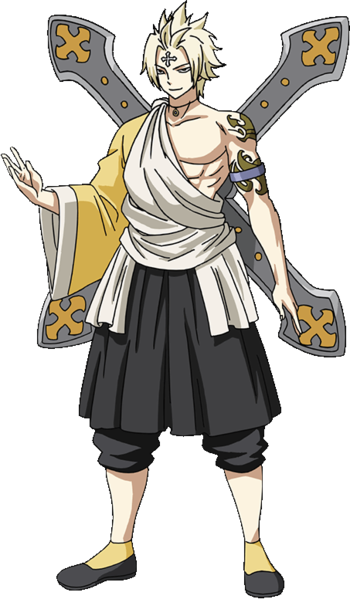 The self-professed son of Zeref who desperately longs to gain his father's approval by killing Natsu, the only family member Zeref ever loved. In truth, he is an Etherious created as a prototype for E.N.D.; although he bears Zeref and Natsu's family name, it is nothing more than a label his "father" gave him. With his ability to amplify the three cardinal desires of pleasure, food, and slumber that all human beings share, Larcade stands alongside August and Irene as one of the most formidable of the Spriggan 12.

The Emperor's chief of staff, who doesn't tolerate his allies' insubordination. Invel uses the purest form of ice and snow magic, capable of freezing anything and everything around him in an instant, including his enemies' minds.

A young woman whose magic, Command T, allows her to alter the size, shape, and mass of any person or object. However, she couldn't care less about her duties and prefers to avoid meaningless conflicts whenever she can. For fifteen years, Brandish has sought to avenge the death of her mother, Grammi, who was apparently killed by Layla Heartfilia. After learning the truth, however, she forms an unlikely friendship with Layla's daughter, Lucy, that challenges Brandish's loyalty to her country.

A female knight with unparalleled skill on the battlefield, and a sharp tongue to match. DiMaria's magic is God Soul, the ultimate Takeover, allowing her to absorb the divine power of gods to use at her leisure. Her favorite form is Chronos, the God of Time, which allows her to stop time and cut her enemies down faster than they can blink. 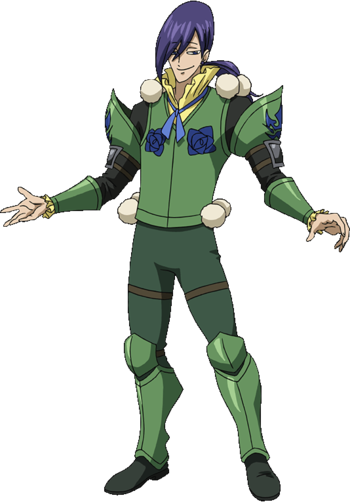 A flowery man who specializes in creating Historias, exact replicas of the deceased from others' memories. Neinhart revels in using this technique, named Historia of the Dead, to arrange twisted reunions between his enemies and their most fearsome foes or dearly departed loved ones. 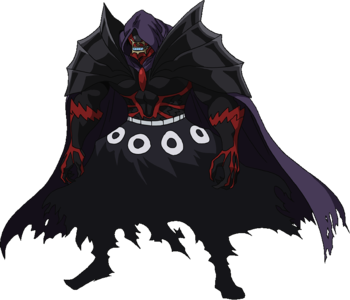 A hooded monster whose entire body is made up of deadly anti-magic particles, making him a harbinger of doom for any wizard foolhardy enough to oppose him. Bloodman also wields an amalgamation of curses used by all of the fallen Etherious demons of Tartaros. 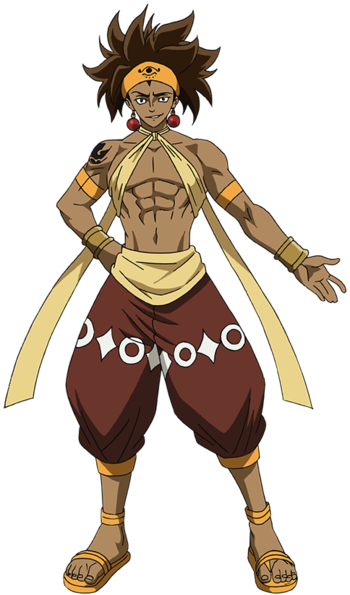 A master sand wizard who is infamous for burying entire cities in sand. Ajeel is one of the more aggressive of the 12 and is said to have attempted invasions of Ishgal against his Emperor's wishes in the past. 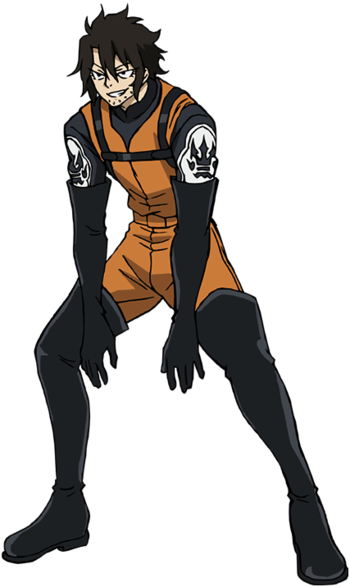 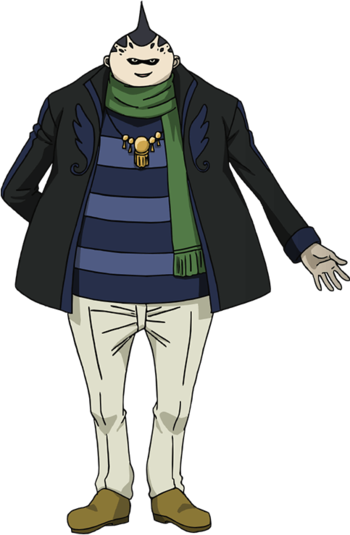 An alchemist from the mechanical Machias race who can pinpoint and exploit his enemies' weaknesses with robotic soldiers using his magic, Weakness. Wall participates in the war through a remote-controlled puppet before deciding to step into the fray himself.

An expert assassin who has allegedly never failed a job. Jacob's magic, Stealth, is specialized assassination magic that allows him to perfectly conceal his entire presence, make the seen unseen, and vice versa. 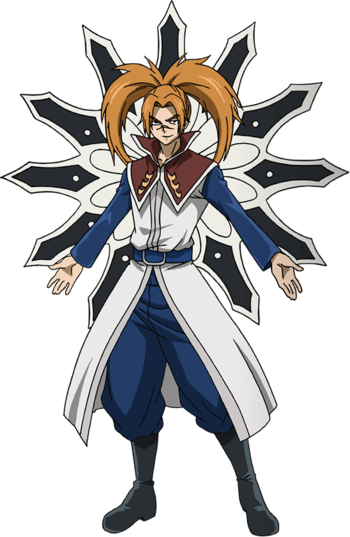 The top-ranked of Ishgal's Ten Wizard Saints, who betrays his homeland and joins the Alvarez Empire to get a shot at killing Acnologia. God Serena is a Dragon Slayer like no other, combining the power of eight different dragon lacrimas in his body to use multiple elements at once.

The Spriggan 12 don't just serve as the Emperor's bodyguards; they are also the commanders of his army, each leading a division of soldiers and subcommanders. Despite their significantly lower rank and power compared to their superiors, these wizards are surprisingly capable against Fairy Tail's strongest. 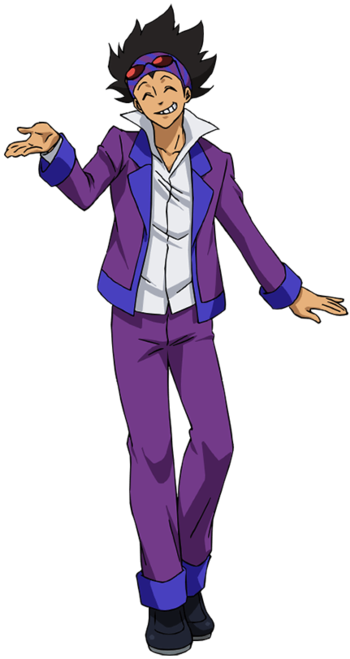 A member of the Brandish Squad, and a master of Spatial Magic. Marin has a tendency to refer to everything going on around him as if it's a part of some sort of test, where he rewards those who "pass" (usually women), and wails on those who "fail" (usually men). 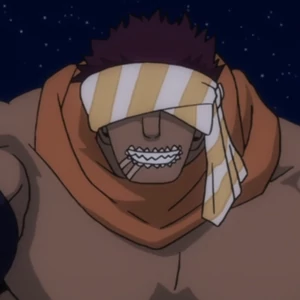 One of the top enforcers of the Ajeel Squadron. He isn't particularly bright, favoring brute force over strategy. 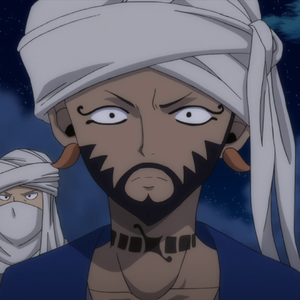 Another of the Ajeel Squadron's top enforcers. He is wiser than his counterpart, Bakel.

A group of knights who serve on the Neinhart Division. 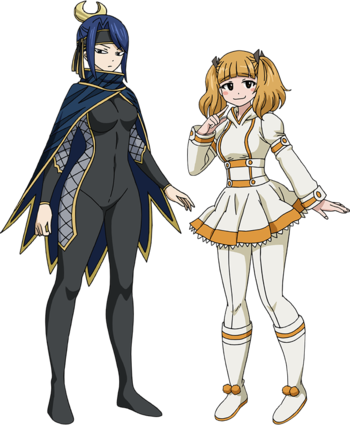 Two members of the Irene Division. Heine is a short-tempered ninja dressed in all-black who can ensnare enemies in ribbon, while Juliet is a cheerful girl dressed in all-white who can douse people in acidic slime.