The Trickster
aka: Trickster Archetype 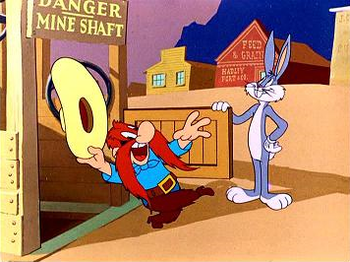 Be careful, watch that last step!
Aelius: I think that if someone tried to rob you in the street, you'd pick his pocket, sell him a better knife and probably offer him a job as a tax collector.
Basso: I choose to take that as a compliment.
— The Folding Knife
Advertisement:

A trickster is a character who plays tricks or otherwise disobeys normal rules and conventional behavior. The Trickster openly questions and mocks authority, encourages impulse and enthusiasm, seeks out new ideas and experiences, destroys convention and complacency, and promotes chaos and unrest. At the same time, the trickster brings new knowledge, wisdom and many An Aesop. Even when punished horribly for their effrontery, their indomitable spirit (or plain sheer foolishness) keeps them coming back for more.

Tricksters can be cunning or foolish or both; they are often funny even when considered sacred or performing important cultural tasks. Even if not otherwise punished, they are often prone to being caught in their own trap, and are very vulnerable to Counter Zany schemes. Sometimes the Trickster appears as a sort of catalyst, in that their antics are the cause of other characters' discomfiture, but they themself is left untouched. (Or at least unenlightened, if the trick backfires.)

In cases where The Trickster is an antagonist or villain, they are quite frequently a Harmless Villain and more of a nuisance than a threat. They often want nothing more than to show that they are smarter and more clever than the hero, who may also treat such a villain as an amusing diversion as they are often easy to defeat non-violently.

The Trickster is NOT the same as the Jerkass. While the Trickster may be mischievous, impudent and uppity, they is not necessarily openly malevolent or sociopathic; in fact, in many cases Tricksters are more friendly to humanity than the gods are. It is possible, however, for a character to be introduced as a Trickster before being gradually or suddenly revealed to possess depths of cruelty and malice that make them truly villainous, in a form of Bait the Dog.