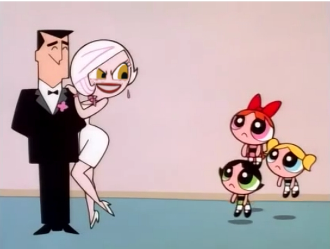 This is what happens when we leave dad without child supervision.
"Better a serpent than a stepmother!"
— Alcestis
Advertisement:

The Wicked Stepmother, the woman hostile to her stepchildren, is a perennial trope. Older Than Feudalism, she appears constantly in legends and folklore around the world and is the villain of many a Fairy Tale.

Psychologists hypothesize that she is an Archetypal Character, devised by children to contain all the hate they have for their mothers so they can continue to regard Mother as perfect. Some historians, meanwhile, believe that the trope has didactic roots and that it was developed as a way of warning children against potentially untrustworthy suitors that might try to court their widowed parents for their wealth or their nobility; indeed, Death by Childbirth was extremely common in the Middle Ages, leading to many children of the period being raised by stepmothers.

Subtrope of Evil Matriarch. Note that the Magical Nanny often becomes a stepmother via Marry the Nanny, but never a wicked one. Department of Child Disservices is a modern organized variation. Usually, Social Services Does Not Exist in stories with a Wicked Stepmother. Contrast Good Stepmother for the trope's logical antithesis. Often a staple of the Cinderella Plot.