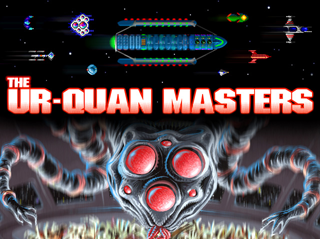 Attention troper — heed this recorded message! This works page speaks with the voice and authority of the Ur-Quan!
Advertisement:

The original Star Control features a "campaign" mode — a rudimentary Turn-Based Strategy game. It pits the Alliance of Free Stars (where humans were only minor members) against the evil Ur-Quan Hierarchy, with each side comprised of seven different races. Each side starts on opposite ends of a small map; the objective is to advance your ships planet by planet, fight enemy ships whenever they are encountered, gather resources to purchase stronger ships, uncover artifacts to boost specific ships' combat prowess, and ultimately clear all enemy assets off the map. However the game also included its famous "Melee mode", which allowed players to pick any two fleets of any composition and just duke it out — skipping all the Resource-Gathering and territory control stuff to give a fun, fast-paced casual experience. In fact, the game became famous primarily for its Melee mode, and many players were content with just playing this mode over and over.

Star Control II: The Ur-Quan Masters took things many levels beyond the first game. For one, "Super Melee mode" is included: an upgraded version of the original's Melee mode, with a plethora of new ships, larger fleets, and the ability to save "favorite" fleet compositions to disk. Once again Super Melee mode was a major attraction to the game, but Star Control II is mostly famous for its story mode: an RPG/Action-Adventure game akin to Starflight, set twenty years after the Alliance of Free Stars lost the war featured in the first game. The player character travels the galaxy searching for a way to overthrow the Ur-Quan, meeting (and, if conversations went badly, battling) most of the alien races mentioned in the first game, discovering several new ones and sooner or later learning that there are worse things than the enslaving Ur-Quan, and they're about to take an interest in mankind. Gameplay follows many RPG tropes, albeit at a different scale: for "character", read "ship"; for "party", read "fleet"; for "town" or "dungeon", read "planet". The game is highly regarded for its engaging story and for the inventiveness and humor of its story and setting.

, maintained by an active online community

announced a sequel to Ur-Quan Masters, then called Ghosts of the Precursors. Unfortunately, the existence of two separate commercial projects led to tensions, which has developed into legal action

to determine exactly who owns which bits of the Star Control IP. After a year and a half of legal conflict, the lawsuit was settled, with the new Star Control franchise (based on Origins) going to Stardock, and The Ur-Quan Masters franchise (consisting of the first two games) going to Ford and Reiche. The sequel to The Ur-Quan Masters will get a new name, and both parties will now make some contributions to the other side's projects.

, and they have also opened a subreddit where people can discuss the development of the game here