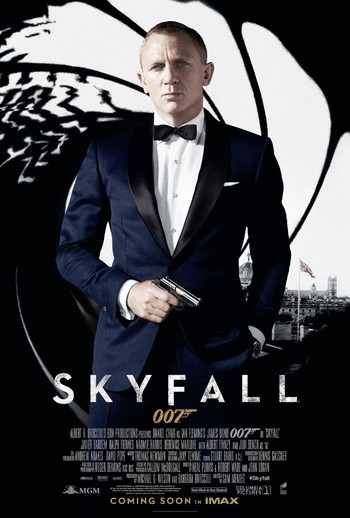 This is the end
Hold your breath and count to ten...
"We are not now that strength which in old days
Moved earth and heaven; that which we are, we are;
One equal temper of heroic hearts,
Made weak by time and fate, but strong in will
To strive, to seek, to find. And not to yield."
— M, quoting the poem "Ulysses

The one where James Bond jokes that he swings both ways.

Skyfall, the twenty-third film in the Eon Productions James Bond franchise, also marks the 50th anniversary of the film series, and is the third film in the series to star Daniel Craig. After a four years-long gap following the financial problems of distributor Metro-Goldwyn-Mayer, the Sam Mendes-directed film saw release in fall 2012. Adele performed the Title Theme Tune.

After an operation in Istanbul to recover an encrypted hard drive containing the identities of every active undercover NATO agent ends in disaster, Bond goes missing. With a top agent presumed dead and the information he sought to save sitting in the wrong hands, MI6 section chief M (Judi Dench) comes under government review for her handling of the situation. But when a terrorist attack targets MI6's headquarters, Bond returns to track down the man responsible: Raoul Silva (Javier Bardem), a dangerous cyberterrorist with a personal grudge against M.

It was Albert Finney's final film before his death in 2019.

Followed by Spectre, a sequel that picks up where this film left off.

Mallory was on Q's and Tanner's side when they were trying to lure Silva to where Bond and Dench's M would be hiding.

Mallory was on Q's and Tanner's side when they were trying to lure Silva to where Bond and Dench's M would be hiding.