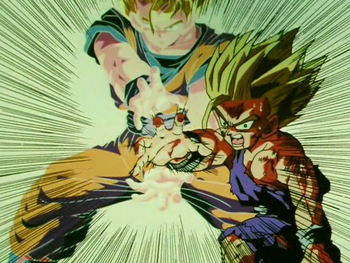 "Note from Shaenon: I apologize for assaulting your delicate senses with what may be the two greatest pages in the history of comics, in which Black Jack OPERATES ON HIS OWN INTESTINES IN THE MIDDLE OF THE AUSTRALIAN OUTBACK WHILE SURROUNDED BY RAVENOUS DINGOES. It had to be done."
— Overlooked Manga Festival

The highly stylized nature of anime (or manga) allows room for really cool things to happen. Here are some of the more memorable of those scenes.

See also the Mundane Made Awesome page, and the Mecha Anime page, because Giant Robots are a whole other level of awesomeness.