Awesome / Kirby: Right Back at Ya! 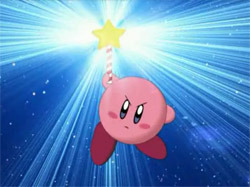 Oh, you're in for it now, Nightmare! Or eNeMeE. Whatever.